Pelosi: 'Morbidly obese' was taste of Trump's 'own medicine' 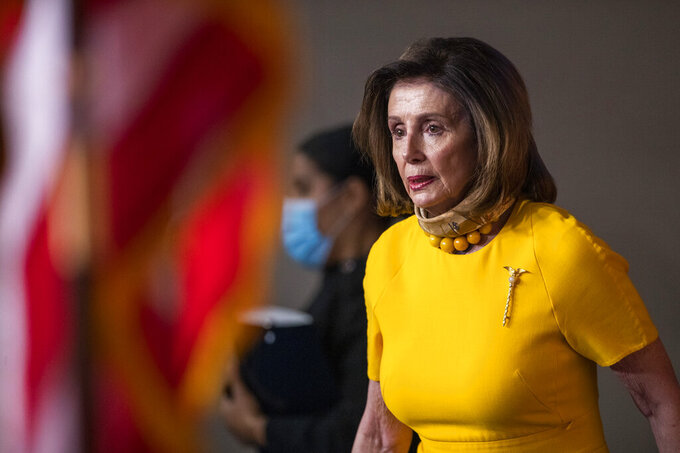 House Speaker Nancy Pelosi of Calif., walks to the podium during a news conference on Capitol Hill, Wednesday, May 20, 2020, in Washington. (AP Photo/Manuel Balce Ceneta)

WASHINGTON (AP) — House Speaker Nancy Pelosi said Wednesday that she called President Donald Trump “morbidly obese” because he's put down women for their weight. And besides, she suggested, the president could lose a few pounds himself as the coronavirus bears down on the nation's capital.

“I gave him a dose of his own medicine. He’s called women one thing or another over time, and I thought he thinks that passes off as humor in certain cultures," Pelosi told reporters at her weekly press conference. "I was only quoting what doctors had said about him, so I was being factual in a very sympathetic way.”

For the record, the president is obese, but not morbidly so. Pelosi on Monday called Trump “morbidly obese.” He responded by dismissing her as “a waste of time.”

Pelosi's level of sympathy is unclear. Even as the virus ravages Americans and the U.S. economy, the two are barely speaking to each other.

They have sparred since the beginning of the Trump presidency and more sharply since Pelosi ascended to the speakership in 2019, for the second time. The topics have ranged from the historic — a government shutdown and Trump's impeachment — to playground-quality name-calling and who has the last word.

But really, it's always been about who has more power, a commodity never more critical than during a pandemic that has killed more than 92,000 in the U.S. and left more than 36 million people looking for work. The spread of the coronavirus, which poses a greater risk of death for older adults and people with health problems, is still significant in Washington. Trump, 73, and Pelosi, 80, are working from opposite ends of Pennsylvania Avenue on what's expected to be another multitrillion-dollar rescue package.

On that, there was little progress Wednesday. Pelosi's $3 trillion bill, which passed the House along party lines last week, got a chilly reception in the Republican-controlled Senate. Majority Leader Mitch McConnell, R-Ky., dismissed it as “unserious and so far left.” It took on rules, McConnell noted, governing marijuana policy during the pandemic. He's noted, too, that the House is out of session this week, while the Senate is in Washington.

Pelosi, meanwhile, sent a letter to colleagues Wednesday morning triggering a 45-day period in which members can vote by proxy to limit the spread of the coronavirus.

Despite those details, Trump won the votes of about 39% of women in 2016, compared with about 52% of men, according to the Pew Research Center.

His conflicts with women persist as the November election draws near. Recently, he's sparred on live television with female journalists who cover the White House. And he referred to Democratic Gov. Gretchen Whitmer as “that woman from Michigan” — a critical presidential battleground state.

In an average of AP-NORC polls released so far in 2020, 39% of women and 46% of men said they approved of how Trump is handling his job as president.

Pelosi returned to those themes several times during her news conference. At one point, she repeated:

She lamented double standards. On the unfinished rescue package, Pelosi noted that Republicans went first in proposing the previous, massive version, which she said contained only the GOP's priorities. When she puts forward one with Democratic priorities, her move is cast as “partisan,” she said.

And she resumed her criticisms of Trump. On Wednesday, Pelosi cast him as a child who comes in the house “with doggy doo on his shoes.” And she described him as a “confabulator,” a word that in some contexts means someone who fills in gaps in knowledge or memory with made-up stories.

“But you know what?” she finished. “Forget about him.”