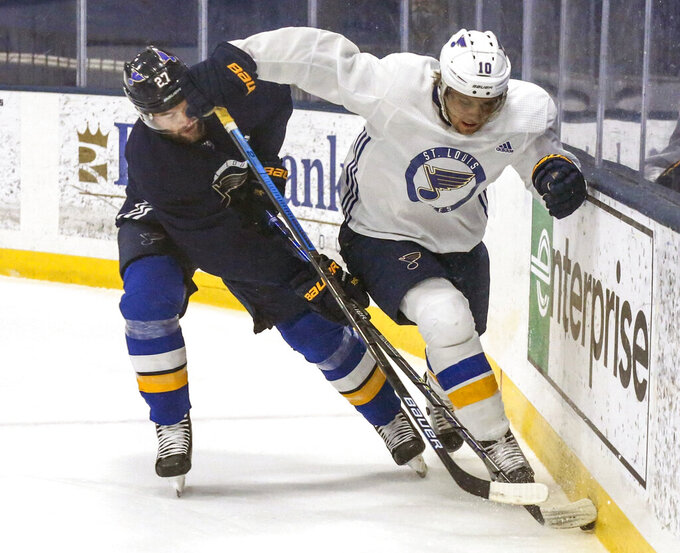 Alex Pietrangelo and his wife had ongoing discussions about whether he should return to the ice when the NHL season resumes.

In addition to wanting to keep the couple’s infant triplets safe during the pandemic, the 30-year-old captain of the Stanley Cup champion St. Louis Blues is heading into free agency while in his prime. He decided to play.

“The focus right now is just kind of getting through this healthy and playing and we’ll see where things end up,” Pietrangelo said.

Staying healthy has added importance for Pietrangelo, Boston’s Torey Krug, Arizona’s Taylor Hall, Washington’s Braden Holtby and more than 100 other pending unrestricted free agents taking part in the 24-team playoff s. Instead of cashing in July 1 had this been a normal year, they face the risk of injury after several months off that could put big paydays in jeopardy.

“Being a free agent that goes into this situation, it’s definitely risky,” Krug said. “I’d be lying to you if I said it’s not. Having three or four months off, and then going right into the most intense hockey you could possibly play at any level, there’s always risk for injury no matter when you play. But certainly in this moment you don’t have the normal training that you do, the preparation, all the work to make sure your body feels good and you can go in without any worries.”

The worries weren’t severe enough for most to opt out. Calgary’s Travis Hamonic and Edmonton’s Mike Green are pending free agents who decided not to play, but they cited family health concerns as the reason.

The thought of not playing never crossed Holtby’s mind. Two years removed from backstopping the Capitals to their first title, the 30-year-old goaltender is more focused on trying to win the Cup again than endangering his future earnings by doing so.

“My job right now is to win a championship with the Caps,” Holtby said. “Everything else after that is completely irrelevant. I don’t think I’ve ever worried about injuries or anything like that. Any game that you get to play, you are pretty fortunate to get to play in this league.”

Florida teammates Evgenii Dadonov and Mark Pysyk are on that same page, too. Pysyk said he gave little to no thought about opting out, figuring this was no different from competing in the playoffs any other season. Dadonov said he’s “not scared” about risking injury.

Washington defenseman Brenden Dillon doesn’t think he has it worse as a pending free agent than others around the league.

“There’s always a risk when you have a big layoff like this,” Dillon said. “I think it just goes to the preparation for us as players in general, whether you are (a free agent) or a guy on a six-year deal.”

Nicklas Backstrom signed a new five-year deal with the Capitals in January, and had more than a few people tell him he’s lucky for getting that done. Under the collective bargaining extension the league and players’ union agreed to, the salary cap will remain flat at the current $81.5 million for at least next season and possibly beyond because of revenue lost during the pandemic.

That economic reality could mean Pietrangelo doesn’t get the kind of monster contract other elite defensemen such as Drew Doughty, Erik Karlsson and Roman Josi signed. Holtby might have to settle for something less than the $70 million, seven-year deal fellow Vezina Trophy winner Sergei Bobrovsky got from the Panthers last summer.

They might have to choose between taking less money from a championship contender or more from a rebuilding team. But they insist that will be a worry for after the season when free agency opens in October.

“I don’t really know what’s going to happen,” Krug said. “I’m just trying to take it day by day and worry about the playoffs right now and then I’ll probably prepare for free agency and see what happens from there.”