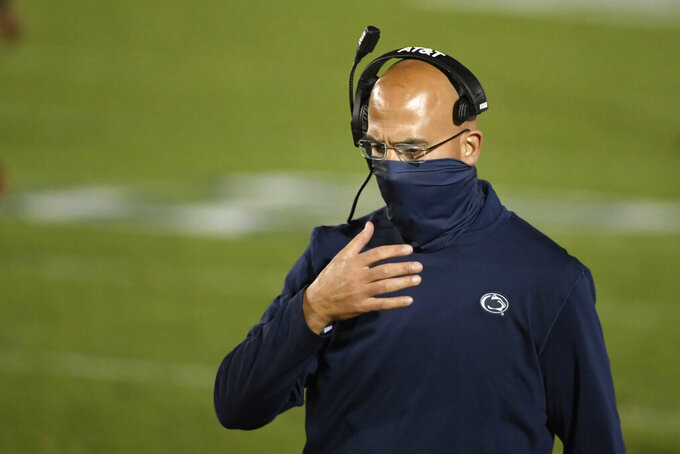 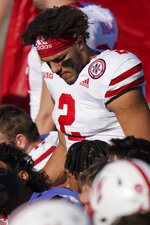 Nebraska is 9-17 under third-year coach Scott Frost and frustration is setting in after losses in its first two games.

“The guys are impatient, just like I’m impatient to get this changed,” Frost said. "I keep saying it, but once it turns it’s going to turn in a big way and we need to have that happen soon.”

If there is a team as desperate for a win as Nebraska, it is Penn State, the Cornhuskers' opponent in Lincoln on Saturday. The Nittany Lions entered the season in the top 10 and with 42 wins in four years, the best stretch since they joined the Big Ten. Following an embarrassing 35-19 home loss to Maryland, they're 0-3 for the first time since 2001.

“I’m a lead with love guy, I always have been,” Penn State coach James Franklin said. “Obviously, when you’re having success, like we’ve been able to have, that’s easy to do. But right now we’re being tested.”

Frost had the reputation for being an offensive wizard when his alma mater hired the former quarterback away from Central Florida. The Huskers have scored one touchdown in their last 19 full possessions, and junior QB Adrian Martinez has regressed since he was a freshman.

Luke McCaffrey played the last three series in a 21-13 loss at Northwestern last week, and Frost didn't rule out the redshirt freshman making his first start against Penn State.

“Unwavering belief in both of them," receiver Kade Warner said. “I think Adrian moving forward will work on the things he needs to work on. And then Luke is always ready. ... He’s ecstatic, he’s electric.”

Penn State quarterback Sean Clifford's job appears secure for now even though he's thrown five interceptions, tied for most in the conference, and is completing just 56.6% of his attempts.

“He's our starter. I'm not a guy that yanks guys and has quarterbacks looking over their shoulder,” Franklin said. “I think that's something that has served us well. Me playing the position, I don't think that breeds confidence. When Will is the guy, he's going to want the same treatment Sean has earned.”

Nebraska ranks seventh with 902 all-time wins and Penn State is eighth with 898. The Huskers have won three of four meetings since joining the Big Ten in 2011 and lead the all-time series 9-8. Penn State won the last matchup 56-44 at home in 2017.

Nebraska was supposed to play its first home game Oct. 31 against Wisconsin, but the game was canceled because of the Badgers’ COVID-19 outbreak. That makes Saturday the latest date for a Nebraska home opener since the Huskers hosted Kansas on Nov. 16, 1895.

Nebraska's Wan’Dale Robinson, an offensive threat at multiple positions last season, has been mostly a non-factor. He has 10 catches for 81 yards, but just one play of longer than 10 yards. He has no rushes and lost 5 yards on his only punt return.

“We’ve had a lot of plays designed for him in the first couple of weeks,” Frost said. “That hasn’t panned out. I think it’s just a matter of time that the ball finds him in our normal offense and we’ll design whatever we need to make sure he’s a part of what we’re doing.”

RAMPING UP THE RUN

Some pressure will come off Clifford if the Lions can get their running game established. They've been hamstrung by the medical-related losses of Journey Brown and Noah Cain. The team is averaging just 3.4 yards per carry, though that number looks a little worse because of Clifford's 83 lost yards on a Big Ten-high 13 sacks.

The COVID-19 pandemic has caused extraordinary stress for Franklin. His wife and two children are living in Florida because his youngest daughter has sickle cell disease, putting her at higher risk if she were infected.

Franklin said the move was necessary because he's around so many different people and could easily contract the virus. He said a reunion probably isn't possible until a vaccine is available.