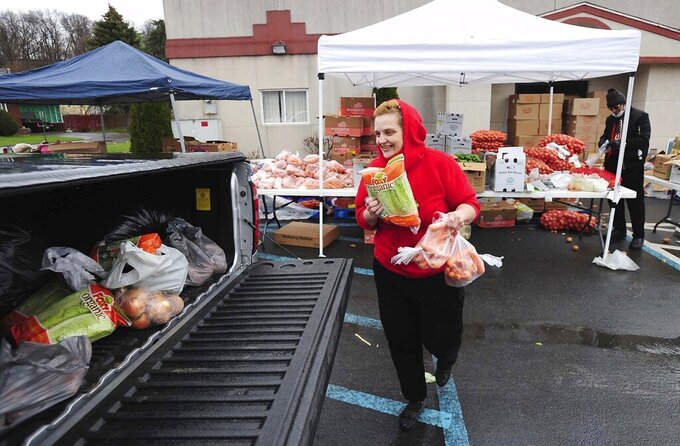 Careen Pourmonir carries vegetables to an awaiting vehicle at a food distribution event at the Jenkins Township Fire Department station, Jenkins Township, Pa., Friday April 3, 2020. Vehicles were lined around the block for the distribution in which several hundred people were served. (Mark Moran/The Citizens' Voice via AP)

Pennsylvania residents should wear face coverings in public to help slow the spread of the coronavirus, the governor said Friday as the state recorded another single-day high in new cases and surpassed 100 deaths

Gov. Tom Wolf urged Pennsylvanians to make their own cloth masks and put them on when they go to the grocery store, pharmacy and other places where people congregate. He spoke a few hours before the federal government issued its own recommendation for Americans to wear face coverings.

“Wearing a mask will help us cut down the possibility that we might be infecting an innocent bystander, like that grocery store cashier, the pharmacist, or someone stocking shelves,” he said in a video news conference. “These folks are keeping us alive by getting us the supplies we need. We owe it to them to do everything we can to keep them safe. Right now, that means wearing a mask.”

Wolf urged residents to heed his order to remain at home, noting that masks “are not foolproof. So it's critical our first act is to ask if we really need to leave our house.”

He added that residents should refrain from wearing the short-supply N95 respirator masks and other medical-grade masks worn by health care workers.

The Department of Health posted guidance on masks on its website.

In other coronavirus developments Friday:

Pennsylvania plans to stop paying thousands of state workers whose offices have been closed as a result of the pandemic.

Paid leave for about 9,000 state employees who are unable to work remotely will end April 10, Wolf’s office said.

The pay freeze affects about 12% of the state workforce, though individual agencies were hit much harder, with the state departments of Transportation and Revenue halting pay to more than half their employees. The state will continue to provide health and life insurance benefits.

“This was a difficult decision as our commonwealth faces significant fiscal challenges,” Wolf’s office said in a statement. “The governor chose an alternative to furloughs so each affected employee will keep their health care benefits and has the flexibility to choose from a range of leave options that is best for them.”

Many of the impacted employees perform clerical work, according to their union.

State workers can use paid vacation days, sick leave or compensatory time to continue to receive a paycheck. Otherwise they will be eligible to apply for unemployment, officials said. Unionized workers can accrue up to 300 sick days under their contract and 45 days of vacation time.

About 5,700 PennDOT workers will go without pay, primarily in Driver and Vehicle Services. Workers assigned to high-priority highway and bridge construction remain on the job, Wolf's administration said.

The Department of Health reported more than 1,400 additional people tested positive for the virus, bringing the total number to over 8,420. There were 12 new deaths for a statewide toll of 102.

More than 70 nursing homes have reported at least one coronavirus patient. Health Secretary Rachel Levine said the state is looking to hire a company that can act as a “SWAT team” to help nursing homes struggling with infection control.

Nursing home residents account for half of Philadelphia’s 26 coronavirus-related deaths.

The Pennsylvania Supreme Court ordered judges statewide to take steps to mitigate the spread of COVID-19 in jails.

In a ruling Friday, the high court declined to order the release of some inmates from county jails. The justices said the request by the American Civil Liberties Union of Pennsylvania “fails to take into account the potential danger of inmates to victims and the general population.”

But the court, in its ruling, also ordered president judges in each county court to make sure the jails are addressing the virus threat.

Jails should apply federal COVID-19 health guidelines for correctional facilities, reduce inmate populations to the extent possible, and try to limit the introduction of new inmates into the system, the court said.

Some jails have already released inmates.

Philadelphia-based rapper Meek Mill’s criminal justice reform group is donating 100,000 face masks to some of the nation’s most notorious jails and prisons.

The celebrity-backed REFORM Alliance announced Friday that 50,000 masks will go to the Rikers Island jail complex in New York City, 40,000 will be sent to the Tennessee Department of Correction, and 5,000 are headed to the Mississippi State Penitentiary at Parchman.

The group, whose founding members include Jay-Z, has been pressing the nation’s jails and prisons to thin their inmate populations, improve sanitation, protect prison workers and take other precautions to slow the spread of the coronavirus.

Philadelphia hospitals have been treating patients from New York City, Philadelphia Health Commissioner Dr. Thomas Farley said Friday, responding to persistent questions about whether the city is prepared to handle an influx from hard-hit New Jersey and New York.

Farley was unable to say how many New York patients are being treated in Philadelphia, noting hospitals don’t report data on place of residence.

“Some people want us to build a wall between us and New York City, and we are not going to do that,” Farley said.

Mayor Jim Kenney said he has not had a formal conversation with New York City or New York state officials about the city helping treat an overflow of patients, but added there are no plans to turn people away.

“We are going to plow through it and help everyone we can help,” he said.

Philadelphia has reported 2,400 confirmed coronavirus cases, more than a quarter of the statewide total.