Peruvians wait to learn who will be president 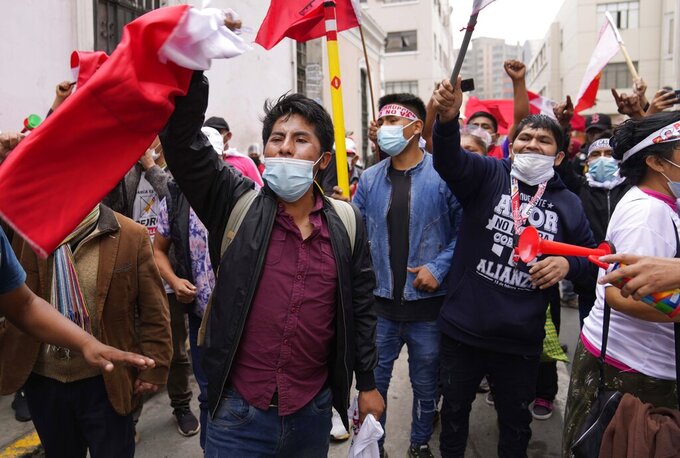 Supporters of presidential candidate Pedro Castillo gather near a ballot counting site, in Lima, Peru, Tuesday, June 8, 2021. Peruvians on Tuesday were still waiting to learn who will become their president next month as votes from Sunday’s runoff election continued to be counted and the tiny difference between the two polarizing populist candidates narrowed. (AP Photo/Martin Mejia)

LIMA, Peru (AP) — Peruvians on Tuesday were still waiting to learn who will become their president next month as votes from Sunday’s runoff election continued to be counted and the tiny difference between the two polarizing populist candidates narrowed.

With 97% of ballots tallied, leftist Pedro Castillo had 50.2% of the vote, while conservative Keiko Fujimori had 49.7%, according to official results. The difference between the candidates was about 69,600 votes.

The candidates did not issue any statements Tuesday. A day earlier Fujimori, who is in her third run for president, charged that her rival’s campaign staff carried out a “a series of irregularities” during the election, but she did not present conclusive evidence. She predicted her support would increase when votes from Peruvians living abroad were counted.

Meanwhile, Castillo told supporters that the “popular will” should be respected.

“I will be the first to enforce the will of the Peruvian people, here and there,” he said.

On Tuesday, former Bolivian President Evo Morales, who supports Castillo, criticized Fujimori and compared her unsubtantiated fraud claims to those of other politicians. Morales tweeted that “(Donald) Trump in the US, (Carlos) Mesa in Bolivia and (Keiko) Fujimori in Peru repeat the same lie and ignore the people’s vote. The result should be respected.”

Morales added that Fujimori's stance is “the same discourse of the racist, fascist and coup right wing: it denounces ‘fraud’ without evidence and attacks the democracy it claims to defend.”

Rubén Ramírez, former foreign minister of Paraguay and head of the Organization of American States’ electoral mission in Peru, congratulated the country for the organization of the elections in the midst of the pandemic and political polarization. He asked that any disagreements be resolved through legal channels.

The candidates have promised coronavirus vaccines for all. More than 186,000 people have died of COVID-19 in Peru, according to figures from Johns Hopkins University, and only 4.1% of the country's 32.5 million residents have been fully vaccinated.

Fujimori, a former congresswoman and daughter of imprisoned ex-President Alberto Fujimori, has promised various bonuses to people, including a $2,500 one-time payment to each family with at least one COVID-19 victim. She has also proposed distributing 40% of a tax on the extraction of minerals, oil or gas among families who live near those areas.

Castillo until recently was a rural schoolteacher in the country’s third-poorest district, deep in the Andes. The political novice has softened his stance on nationalizing key sectors of the economy, but he remains committed to rewriting the constitution that was approved under the regime of Fujimori’s father.

Election results showed Castillo overwhelmingly dominated the impoverished rural areas of the Andes and much of the Amazon. Fujimori was the candidate of the business elite, dominating the capital and other cities on the Pacific coast.

The winner will succeed President Francisco Sagasti on July 28.