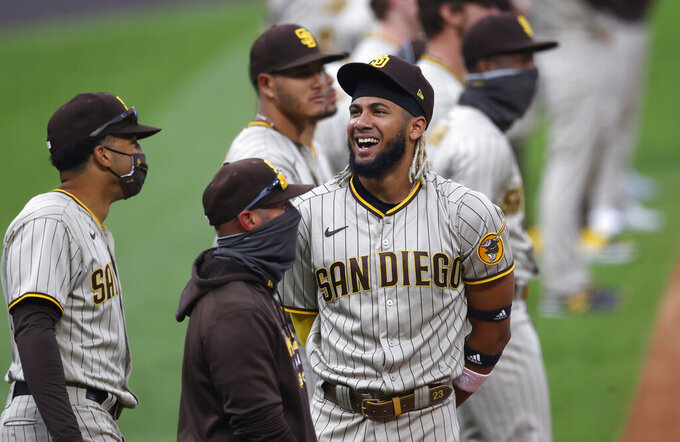 San Diego Padres shortstop Fernando Tatis Jr. jokes with teammates as they line up for introductions before a baseball game against the Colorado Rockies Friday, July 31, 2020, in Denver. (AP Photo/David Zalubowski) 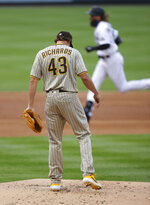 DENVER (AP) — Tommy Pham carried a little grudge with him to the plate.

He took it out on the offending party.

Pham hit a three-run homer in the ninth after Fernando Tatis Jr. tied it with two outs, and the San Diego Padres rallied for an 8-7 win over Colorado on Friday night to spoil the Rockies' home opener.

On a 3-2 count, Pham sent a fastball from closer Wade Davis (0-1) over the left-center wall to give the Padres an 8-5 lead. This after Davis intentionally walked Manny Machado to face Pham.

“Whenever a team walks someone in front of you, it’s a sign of disrespect to you as a hitter,” Pham said. "As a professional you just want to be respected. After tonight, maybe I got a little bit more respect.”

A little Coors Field comeback — for the other side. It began with Tatis, who went deep to tie the game after Davis got two quick outs in the inning.

“We never felt out of it, even down to the last out,” Padres manager Jayce Tingler said. “Just the chance to do something special, magical, whatever you want to call it.”

It's the second straight night that Pham has come through for the Padres. Pham hit a go-ahead single in the 10th inning as the Padres beat San Francisco under baseball’s new extra-innings format.

Craig Stammen (1-0) threw 1 1/3 scoreless innings to earn the win, while Kirby Yates made things interesting in the ninth. Yates surrendered a run-scoring single to Charlie Blackmon and then walked Ryan McMahon with the bases loaded to make it 8-7. He was taken out for Drew Pomeranz, who got pinch-hitter Chris Owings to fly out to earn his second save.

The line for Davis read like this: Two outs, four runs, two hits, two walks and two homers. His ERA jumped to 16.88.

“He missed with the fastball and it came back to bite him,” Rockies manager Bud Black explained.

Asked if Davis was on a short leash given the shortened season, Black responded: “We’re going to continue to watch all of our players. We’re going to critique them and evaluate them, on the pitching side, on their stuff and how they’re throwing the ball.”

The Padres overcame Blackmon hitting his first homer of the season, a two-run shot in the first, along with Trevor Story's solo homer in the seventh that gave Colorado a one-run lead. Pinch-hitter Matt Kemp also added a two-run double.

Stammen's outing gave a struggling bullpen a bit of a boost. It's been a tough stretch for the Padres relievers, who surrendered a four-run lead Wednesday and a five-run lead Thursday. They nearly gave up another.

There were several fielding gems in this game, highlighted by Story’s throw from the seat of his pants near second base with the Padres threatening in the seventh. The ball deflected off reliever Daniel Bard, and Story fell down as he tried to grab it. He threw to first to just get Jake Cronenworth.

David Dahl also had a diving catch in center and Pham an outstretched grab in left during a game delayed for 37 minutes by a predicted rain shower that never materialized.

Colorado's home opener featured a virtual first pitch and national anthem, along with a tribute on the video screen to the players from their families and loved ones. There also was a flyover and fireworks.

The only thing missing? Energy from the stands, of course.

“We love our fans and love having them out there,” Nolan Arenado said. “It’s disappointing not to see them.”

The Blake Street Bombers were watching from behind home plate -- cutout pictures of them anyway. There were photos of Vinny Castilla, Andres Galarraga, Larry Walker, Ellis Burks and Dante Bichette. Along with them were images of Todd Helton and outfielder Ian Demsond, who opted out this season in part because of the coronavirus pandemic.

Story had an error in the sixth that led to a run and Gray threw a wild pitch that brought in another.

Padres: 1B Eric Hosmer traveled with the team to Denver but missed his third straight game with a stomach illness the team said is not related to COVID-19.