Phil Nevin back with Yanks after COVID-19, loss of 22 pounds 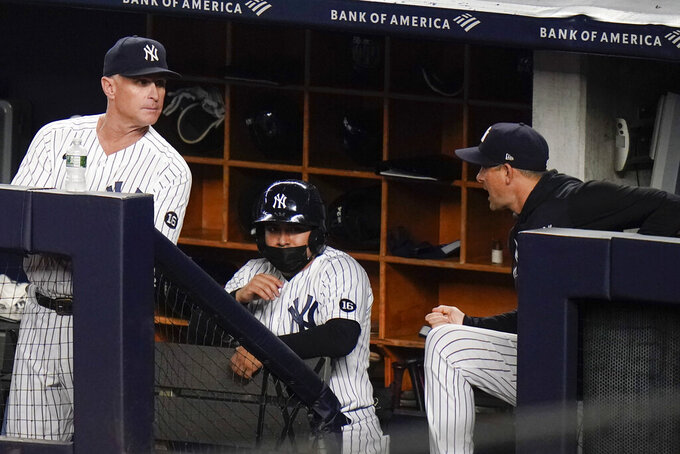 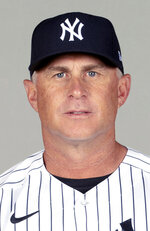 NEW YORK (AP) — Phil Nevin’s voice cracked and his face flushed. Forced from the New York Yankees third base coaching box by the coronavirus and infections, he also had to miss his son’s major league debut.

“We had talked about that day for a long time,” Nevin said Friday before he returned to the Yankees dugout for the first time since May 9. “Not to be able to see him right after the game, now that part, that gets you a little bit, because we’ve talked about it for so long, I told my other son, l go: 'I can still get this day back. No pressure.'”

Nevin, who also suffers from asthma, said he lost 22 pounds and was diagnosed with a bacterial infection in his kidneys and a staph infection. He still has an IV line in an arm that has to be removed before he can be back on the field, but he was back in the dugout and handled the lineup card exchange for Friday night’s series opener against Boston.

His last game at third was May 9 — Mother’s Day — against Washington. The 50-year-old learned of the COVID-19 diagnosis that night during the Yankees’ flight to Florida. The next day he felt OK, and he recalled telling pitching coach Matt Blake at the team hotel: “Hey, there’s no security down there watching us. ... Why don’t we go down for a little walk?”

When Nevin got tired after 15 minutes, Blake — without telling Nevin — called Yankees athletic trainer Timothy Lentych, who ordered blood tests at a hospital on Tuesday morning. That night, as the Yankees started a series opener at the Rays, Nevin got a call telling him: “Get to the hospital right away.”

“There was an infection we thought was just located in my kidneys as they weren’t functioning properly. Some liver issues going on,” Nevin said. “I knew what it meant: Your body can turn septic.”

A big league first baseman, third baseman, outfielder and catcher for San Diego, Detroit, Texas, Minnesota, the Chicago Cubs, Anaheim and Houston from 1995-2006, Nevin was an All-Star with the Padres in 2001.

He managed the Orange County Flyers in the independent Golden Baseball League in 2009, Detroit’s Double-A Erie SeaWolves in 2010, the Tigers’ Triple-A Toledo Mud Hens from 2011-13 and Arizona’s Triple-A Reno Aces from 2014-16. Nevin became San Francisco’s third base coach in 2017 and has been Aaron Boone’s third-base coach with New York since 2018.

“He’s a guy that brings some fire and intensity,” Yankees right fielder Aaron Judge said. “He should be a manager somewhere, just the type of knowledge he has of the ins and outs of the game. So we’ve been really missing him, but to have him back, see him back, it’s going to be big time for us.”

Nevin had been vaccinated against the coronavirus.

“They’re convinced that the vaccine kept the infection, the COVID, so to speak, out of my lungs, ” he said. “If that had been compromised and tacked on to what I had before I contracted it, I was just told it would probably have not been a very good outcome as far as the healing process, and I don’t want to talk about anything worse than that, but it certainly would have been a longer time to get better.”

Nevin has become pro-vaccine because of the experience.

“I wasn’t an anti-vaxxer,” he said. “I just wasn’t sure if I would have got it if I wasn’t in baseball or not. I don’t know. But getting it certainly and learning this process through this last few weeks, what it did for me, I would certainly encourage anybody that asked me, I would say to absolutely get it.”

Tyler Nevin, a 24-year-old first baseman, debuted for Baltimore on May 29 and doubled off former AL Cy Young Award winner Dallas Keuchel of the Chicago White Sox in his first plate appearance. Mom Kristin and brother Kyle, whose Baylor team had just been eliminated from the Big 12 tournament two days earlier, were at Chicago’s Guaranteed Rate Field.

Phil Nevin had negotiated into his contracts with Yankees general manager Brian Cashman the right to be absent from the Yankees for his son's big league debut. But it was not to be.

“I had a great seat on the couch,” Phil Nevin said, “probably a better vantage point where I was watching to see his approach and go out about like a dad coach.”

Tyler Nevin was optioned back to Triple-A Norfolk after going 1 for 5 with a walk in two games, so his dad will have to wait to see him play a big league game in person.

For now, Phil Nevin was excited to be back at Yankee Stadium.

“Phil is beloved in our room by the staff and the players, but is also a valuable member of our staff and just what he brings to the table,” Boone said. “So to at least have them on the bench tonight as another set of eyes and the expertise he brings will be very welcomed, and excited to get them back in that capacity, hopefully at some point get them back out to third.”