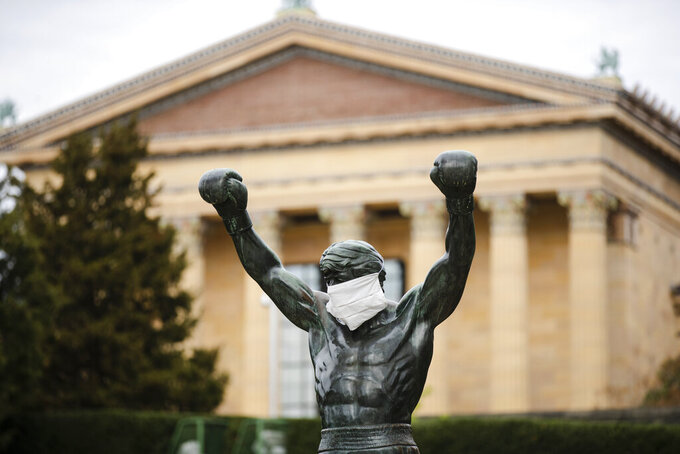 FILE - In this April 14, 2020, file photo the Rocky statue is outfitted with a mock surgical face mask at the Philadelphia Art Museum in Philadelphia. Philadelphia is banning indoor dining at restaurants and plans to shutter gyms, museums and libraries as the city battles a resurgence of the coronavirus, officials announced Monday, Nov. 16. (AP Photo/Matt Rourke, File)

Philadelphia is banning indoor gatherings of any size, public or private, as the city battles a resurgence of the coronavirus, officials announced Monday, warning that hospitals will become overrun by the end of the year without dramatic action.

The new restrictions take effect Friday and extend at least through the end of the year.

“If we don’t do something to change the trajectory of this epidemic, the hospitals will become full, they’ll have difficulty treating people, and we’ll have between several hundred and more than 1,000 deaths just by the end of this year,” Farley said.

The blanket prohibition on indoor gatherings of any kind — everything from holiday parties and football gatherings to baby showers and brunches — will not be enforced, city officials acknowledged. Farley said the city is seeking voluntary compliance instead.

The rate of new confirmed infections in Philadelphia is growing about 4% each day and the virus is spreading widely, including at small social gatherings, he said, predicting the weeks ahead will be “a little grim if we don’t take strong action.”

On the other side of the state, in the Pittsburgh area, the Allegheny County health director, Dr. Debra Bogen, called the spike in cases “beyond concerning” and begged residents to follow public health guidance, saying that “doing nothing is not an option.” The county has made no move to enact tougher restrictions, but Bogen said "we are actively considering what options are available to the Health Department to limit this spread.”

Unlike governors in some other states, Democratic Gov. Tom Wolf has held off on reimposing the kind of sweeping restrictions seen earlier in the pandemic.

Administration officials said the state’s health care system is not overburdened, even as hospitalizations have more than quadrupled since the beginning of October. Pennsylvania has shattered daily case records recently, and deaths and the testing positivity rate are also up sharply.

“We know we can’t overwhelm our health care system — something we did not do in the spring and that we are at this point not doing, but to ensure this, we must follow the mitigation efforts” that are already in place, said Wolf’s spokesperson, Lyndsay Kensinger. Those include a statewide mask mandate, occupancy restrictions at bars and restaurants and limits on indoor and outdoor gatherings.

A trade group, The Hospital and Healthsystem Association of Pennsylvania, said that statewide, COVID-related hospital stays are shorter, treatments are better and the surge in cases is more geographically spread out than it was in the spring, allowing hospitals to manage better.

In Philadelphia, pushback to the new restrictions began even before they were officially announced.

A Planet Fitness franchisee, National Fitness Partners, said Monday that it “makes absolutely no sense why our business, employees and members are being targeted,” asserting there’s no evidence of the virus spreading inside its facilities.

Mayor Jim Kenney, a Democrat, acknowledged “COVID fatigue” and the economic hardship posed by another round of shutdowns but added: “I also think that dying of COVID is an extreme result of not doing what we need to do now to get the curve back down and flatten it out and get us back to some semblance of normal.”

The Philadelphia school district had planned to start returning K-12 students to the classroom, but said last week that schools will remain virtual for the foreseeable future in light of the explosion in cases.