A philanthropic drive to aid Black women is gaining momentum 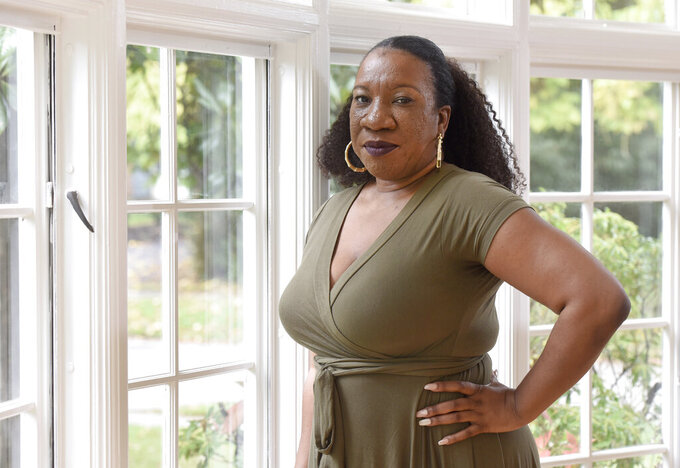 Tarana Burke, founder and leader of the #MeToo movement, stands in her home in Baltimore on Oct. 13, 2020. Black women and girls are now the focus of several high-profile philanthropic initiatives as major donors look to address the racial wealth gap and the long-chronicled funding disparity for organizations serving minority women. Teresa Younger, who helped launch The Black Girl Freedom Fund and its 1Billion4BlackGirls campaign in September with other Black women in philanthropy and activism — including Me Too Founder Tarana Burke — said that donors should be cautious about making assumptions in their giving. (AP Photo/Steve Ruark, file)

The needs of Black women and girls have become a focus of philanthropic efforts as major donors seek to narrow a racial wealth gap and address chronic funding disparities for groups that serve minority women.

This week's guilty verdicts for Derek Chauvin, the former Minneapolis police officer whose murder of George Floyd sparked global protests against racial inequity, could lend momentum to initiatives from the Ford Foundation, Goldman Sachs and a group of activists and philanthropic leaders. Collectively, they're seeking to increase funding to organizations for Black girls and feminists and to enhance economic opportunities for Black women.

Goldman Sachs plans to tailor its investments to education and workforce advancement, among other needs. Two other funds are still assessing how they will disseminate their grants.

Statistics show that organizations for Black women have been disproportionately neglected by foundations. In 2017, one of the latest years for which comprehensive data is available, less than 1% of the $67 billion that foundations contributed went to organizations that specifically target minority women and girls, according to a report from the Ms Foundation for Women and the consulting group Strength in Numbers. Less than $15 million was specified as benefiting Black women and girls.

Those findings helped launch the Black Girl Freedom Fund, established in September by eight Black women in philanthropy and activism, including Tarana Burke, who is credited with starting the Me Too movement. Its first campaign is 1Billion4BlackGirls, which calls for $1 billion in contributions earmarked for Black girls over the next decade.

Co-founder Monique Morris, who also leads the philanthropic organization Grantmakers for Girls of Color, says it wants to have the $1 billion in contributions come from across the philanthropic community. The Black Girl Freedom Fund will seek to support legal advocacy and fight against what it calls "structural violence enacted against Black girls.”

As part of this effort, the fund partnered with Shondaland, a television production company, for a December episode of the show “Grey’s Anatomy.” The episode portrayed two Black girls being kidnapped by a human trafficker, reflecting a social problem the fund wanted to address: A report from the U.S. Justice Department that analyzed suspected human trafficking from 2008 to 2010, found that the overwhelming majority of sex trafficking victims were women and 40% were Black.

The singer Ciara made a sizable contribution to the fund, Morris said. Support came, too, from other celebrities, including actors Gabrielle Union and Rashida Jones, and from Valerie Jarrett, who was a senior adviser to former President Barack Obama.

A study released in December by Indiana University’s Lilly Family School of Philanthropy showed that while donations to organizations involved with women and girls are increasing, they still represent less than 2% of charitable giving. Teresa Younger, president of the Ms Foundation for Women and a co-founder of the Black Girl Freedom fund, suggests that the meager funding has reflected "a lack of interest in philanthropy in truly investing in those organizations.”

Black women and girls do, of course, benefit from many nonprofits and charities, even when such contributions are not earmarked specifically for them. But Younger suggested that donors shouldn't assume that this is occurring. That’s why she thinks establishing a fund that focuses entirely on that demographic is important.

“One of the things that we know is: If you don’t name it, then it’s not happening,” she said.

The barriers to accessing foundation funds range from an organization’s inability to find grants relevant to the work they do to unresponsive donors to excessive paperwork that gets in the way of securing contributions.

“We know that Black women and Black women’s organizations often get very little funding in the global landscape, but Black feminists, and women that are prepared to come out explicitly as being feminist, are severely marginalized,” said Nicolette Naylor, the Ford Foundation’s international program director for gender, racial and ethnic justice.

The foundation is backing the Black Feminist Fund, which it has helped launch with a $15 million contribution. That fund will be led by activists from across the African diaspora, and according to the foundation, will serve as “the first global resource hub for Black feminist organizing and philanthropy.”

One of its co-founders, Tynesha McHarris, said the goals include ending violence against Black women, supporting young Black feminists and advocating resource rights around things like land, water and food.

Separately, Goldman Sachs in March committed $10 billion over the next decade to an initiative to improve the lives of 1 million Black women by 2030. Most of the money is slated to be spent on Black women-focused investments, in areas like health and job creation, with $100 million earmarked for philanthropy.

That announcement coincided with the release of a report from the bank called Black Womenomics, which focuses on the racial wealth gap and the need to seek economic equity for Black women. This is happening even while Goldman, and others like JPMorgan Chase, are asking shareholders to reject a proposal by the Service Employees International Union, a labor union, and the CtW Investment Group for an independent review of how the banks' lending practices and other policies have affected racial equity.

“Over the past year," Goldman said in its annual shareholders statement, “we have further strengthened our established racial-equity related initiatives and taken new actions to encourage open dialogue, assess our shortcomings and enhance our diversity and inclusion efforts to create lasting change both at our firm and within our communities. In light of our ongoing commitment to these important issues, we believe that the adoption of this proposal is unnecessary and therefore not in the best interest of our firm or our shareholders.”

Since last year's protests, corporations have emerged as the leading financiers of racial equity. Yet it remains unclear where $3.9 billion out of the $8.9 billion they’ve collectively pledged to racial equity causes is going, according to preliminary data from the philanthropy research organization Candid.

Goldman Sachs is holding “listening tours” with Black women before making any investments or donations, said Asahi Pompey, head of the bank’s foundation. She said Goldman wants to be “expeditious” but also strategic in its decisions. There’s no timeline for when the $100 million it has pledged in contributions will begin to be distributed. But Pompey said the bank plans to issue periodic reports about its progress.

Black Americans have been disproportionately hurt economically by the pandemic recession. And though they represent less than one-third of the female labor force in the U.S., Black and Hispanic women have accounted for 46% of the decline in labor force participation among women during the pandemic, according to the Pew Research Center.

Naylor, of the Ford Foundation, said that while the launch of the Black Feminist Fund was spurred by the protests, conversations about it had been taking place since 2013. Once fully established, the fund plans to make grants to grassroots Black feminist organizations in Africa, the Americas and Europe.

Its three founders are seeking $100 million in donations from all donors in the first year. But ultimately, they’re aiming for the fund to be sustained by donors who are Black women. One core principle, McHarris said, is “self-determination.”

Similarly, the Black Girl Freedom Fund’s 1Billion4BlackGirls campaign has a $100 million goal for its first year. So far, the fund has received $15.9 million in contributions.

Morris said the fund plans to announce two major gifts in the coming weeks that, along with investments and contributions from other foundations, will put it on track to reach its goal by September. Decisions on what organizations will receive the first set of grants from the fund will be made in June.