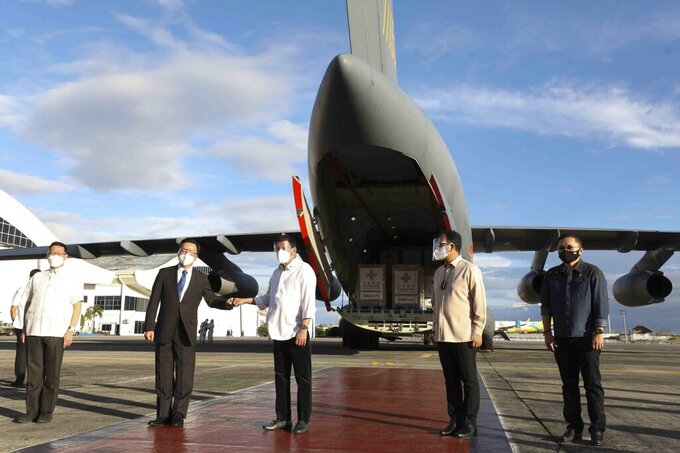 In this photo provided by the Malacanang Presidential Photographers Division, Philippine President Rodrigo Duterte, third from left, poses with Chinese Ambassador to the Philippines Huang Xilian, second from left, as they stand in front of a Chinese military plane carrying Sinovac vaccines from China at the Villamor Air Base in Manila, Philippines on Sunday Feb. 28, 2021. The Philippines received its first batch of COVID-19 vaccine Sunday, among the last in Southeast Asia to secure the critical doses despite having the second-highest number of coronavirus infections and deaths in the hard-hit region. (Toto Lozano/ Malacanang Presidential Photographers Division via AP)

MANILA, Philippines (AP) — The Philippine government launched a vaccination campaign on Monday to contain one of Southeast Asia’s worst coronavirus outbreaks but faces supply problems and public resistance, which it hopes to ease by inoculating top officials.

Cabinet officials, along with health workers and military and police personnel, were among the first to be vaccinated at six hospitals in Metropolitan Manila, after the arrival Sunday of 600,000 doses of vaccine donated by China.

At the state-run Philippine General Hospital in Manila, hospital director Dr. Gerardo Legaspi was inoculated first in a televised event and was followed by Cabinet and Department of Health officials.

“Let’s get vaccinated, let’s save lives every day. We need to move on,” Manila Mayor Isko Moreno said in a speech at the hospital, adding he would get vaccinated in about a week after the health workers.

The Philippines was among the last Southeast Asian countries to receive vaccines due to delivery delays, although it has reported more than 578,300 infections, including 12,322 deaths, the second-highest totals in Southeast Asia after Indonesia. Lockdowns and quarantine restrictions have set back the country's economy in one of the worst recessions in the region and sparked unemployment and hunger.

“Our economy is really down, so the earlier these vaccinations gain speed, the better,” President Rodrigo Duterte told a televised news conference late Sunday after witnessing the delivery of the vaccines at an air base in the capital.

Duterte said he was considering a further easing of quarantine restrictions in the capital and elsewhere once the vaccination campaign gains momentum. With just 600,000 doses available, Monday’s immunizations were billed as symbolic.

Aside from the donated vaccine from China's Sinovac Biotech Ltd., the government has ordered 25 million more doses from the company but no date has been set for the deliveries. Health Secretary Francisco Duque III said the arrival of an initial 525,600 doses of vaccine from AstraZeneca that was initially scheduled for Monday would be delayed by a week due to supply problems.

China’s donation is a tiny fraction of at least 148 million doses the government has been negotiating to secure from Western and Asian companies to vaccinate about 70 million Filipinos for free in a massive campaign funded by foreign and domestic loans. Most of the shipments are expected to arrive later this year amid a global scramble for COVID-19 vaccines.

Duterte’s administration has come under criticism for lagging behind most other Southeast Asian countries in securing the vaccines, but the president has said wealthy Western countries have cornered massive doses for their citizens, leaving poorer nations scrambling for the rest.

Aside from supply problems, there have been concerns over the vaccine’s safety, largely due to a dengue vaccine scare that prompted the Duterte administration to stop a massive immunization drive in 2017. There have also been concerns even among health workers over the Sinovac vaccine because of its lower efficacy rate compared to others developed in the West and Russia.

Carlito Galvez Jr, who leads government efforts to secure the vaccines, said Duterte saw some surveys showing low public confidence in the Sinovac vaccine and ordered him and other top officials to be inoculated with it.

At the Philippine General Hospital, where he was inoculated with the Sinovac vaccine, Galvez said Filipinos could not return to their normal lives and the economy would not recover if people refuse to get immunized and prefer Western vaccines, which would come later in the year.

“We should not wait for the so-called best vaccine. There is no best vaccine because the best vaccines are those which are effective and efficient and come early,” Galvez said at the hospital.