PHOTOS: See music's return to the big stage at the Grammys 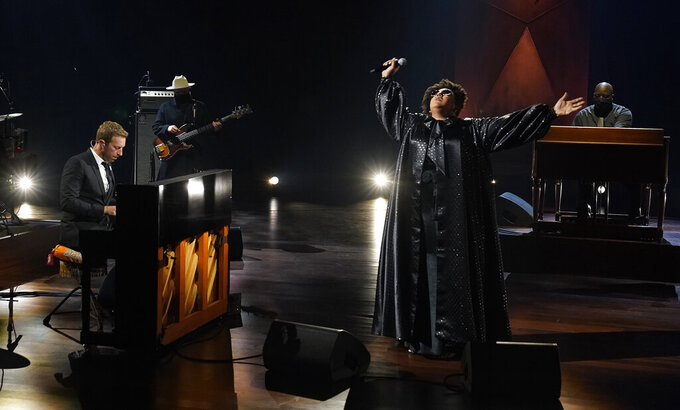 Chris Martin, left, and Brittany Howard perform together during the "In Memoriam" section of the 63rd Grammy Awards at the Los Angeles Convention Center, Tuesday, March 9, 2021. The awards show airs on March 14 with both live and prerecorded segments. (AP Photo/Chris Pizzello) 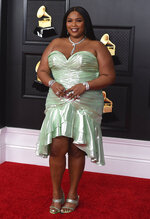 LOS ANGELES (AP) — Music returned in a big way at the Grammy Awards, as artists sidelined during the pandemic convened in downtown Los Angeles for a historic night.

Beyoncé emerged from Sunday’s ceremony as the most decorated woman in Grammys history, while Taylor Swift became the first woman to win album of the year three times. The history didn’t end there: wins by H.E.R. and Megan Thee Stallion made this year’s ceremony the first time that four separate and solo female acts won the Grammys’ top four prizes.

The show played out seamlessly between an outdoor session emceed by Trevor Noah where Swift, Beyoncé, Dua Lipa, Megan Thee Stallion, Harry Styles and others won honors. Notably, all were present to accept.

Gone were the dressed down looks of previous virtual ceremonies. High fashion returned to the Grammys red carpet, even if it was a much smaller affair.

The pandemic’s toll was driven home throughout the evening — top awards were announced by key figures at music venues that have been shuttered due to coronavirus restrictions. And a lengthy In Memoriam segment highlighted the extent of death — both due to the virus and other causes — that befell the music community in the past year.

Before and during the show, artists spoke about how much being back onstage meant to them, and how they couldn’t wait to perform for fans. The show featured large setpiece performances by Bad Bunny, Doja Cat, BTS and more.

Many also spoke about the racial reckoning that has unfolded in the wake of George Floyd’s death. Mickey Guyton, the first Black woman nominated for best country solo performance — performed her song “Black Like Me,” which was a response to police violence and the ravages of the coronavirus.

Accepting one of her awards, Beyoncé reflected on the moments that led to her triumphs at this year’s ceremony.

“I have been working my whole life,” she said. “This is such a magical night.”