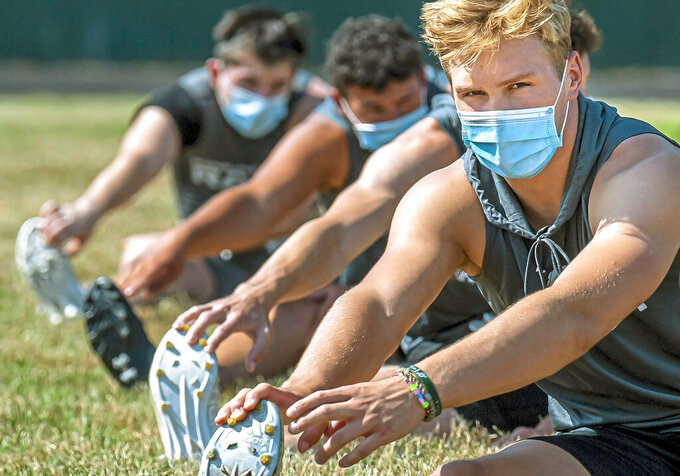 FILE — In this file photo from July 6, 2020, Pine-Richland High School quarterback Cole Spencer, right, and teammates stretch during their first practice of the season, at Richland Elementary in Pine-Richland Township near Warrendale, Pa. The Pennsylvania Interscholastic Athletic Association (PIAA) governing body for Pennsylvania interscholastic sports signaled again Monday, Aug. 17, 2020, that it's seriously considering moving ahead with the fall season despite the governor's recommendation that all youth athletics be canceled until 2021. (Steph Chambers/Pittsburgh Post-Gazette via AP, File)

The governing body for Pennsylvania interscholastic sports signaled again Monday that it’s seriously considering moving ahead with the fall season despite the governor’s recommendation that all youth athletics be canceled until 2021.

“We feel fairly comfortable that we can get school sports back up and running,” Melissa Mertz, associate executive director of the Pennsylvania Interscholastic Athletic Association, said in a radio interview.

The PIAA board plans to make a final decision on fall sports when it meets Friday.

The PIAA had been making plans to start the season as scheduled when Gov. Tom Wolf’s administration issued a “strong recommendation” in early August that scholastic and recreational youth sports be put off until January to help prevent the spread of the coronavirus.

The surprise announcement prompted the PIAA to push back the start of mandatory sports practices for two weeks while it decided its next move.

“We were shocked by that just because up until that point we had not received any pushback” from the Wolf administration on restarting sports, Mertz said Monday on WITF ’s “Smart Talk.” “It’s caused us to tap the brakes.”

The Wolf administration says that youth sports increase the risk of spreading the virus and should be canceled for now. It noted the Big Ten, Pac-12 and some other college conferences have postponed football and other fall sports because of the pandemic. Several major conferences have said they intend to play football, although in some cases with schedules curtailed.

Mertz acknowledged that cases are likely to crop up, but said youth recreational sports have been played in Pennsylvania throughout the summer with no widespread outbreaks reported.

The PIAA has also argued that school-sanctioned sports can help ensure compliance with pandemic safety measures. The organization recently published a 25-page guide with heath and safety recommendations for each fall sport.

Mertz said the PIAA wants to avoid delaying fall sports until spring because fall generally has better weather, flu season would still be a factor in spring, and overlapping sports seasons would present schools with a logistical hurdle.

The PIAA met with Wolf administration officials Friday and, afterward, tweeted it was concerned the governor's recommendation was “not based upon Pennsylvania sports specific data." The organization also said that some member schools perceived the recommendation as a mandate.

Wolf and his administration have repeatedly said the decision on whether to hold fall sports rests with the PIAA and individual schools.

Dozens of states nationwide have delayed fall sports, and at least 15 won’t play high school football this autumn, according to the National Federation of State High School Associations.

Some Pennsylvania schools have already opted out of fall sports, but Mertz said she expects most to proceed with them if the PIAA gives the go-ahead.

House Republicans, meanwhile, said Monday the Wolf administration has offered no scientific basis for recommending the cancelation of fall sports. When Rep. Seth Grove, R-York, asked the state Department of Health for records of “public health data and models used by the department” to determine that youth sports should be postponed, health officials replied that no such records existed, according to documents released by the GOP.

The Health Department said it's publicly released a great deal of data, showing, among other things, rising COVID-19 cases among children — and nearly 10,000 since the beginning of the pandemic — and dozens of cases of a rare pediatric syndrome linked to the virus.

“This recommendation is based on data and common sense,” said Heath Department spokesperson Nate Wardle.

In other coronavirus-related developments in Pennsylvania on Monday:

BACK TO THE CLASSROOM?

Many Pennsylvania school districts are planning a full return to the classroom this fall, according to data released Monday by the state Department of Education, though that could change after state health and education officials issued new reopening guidance last week.

Some 657 school districts, public charter schools and career and technical centers have submitted their reopening plans to the state, and 35%, or about 230, have indicated they plan to bring students back to class five days a week, the Education Department said.

About a quarter plan to start the year virtually, while more than 40% plan to offer a combination of remote and in-person instruction.

Some of the districts’ plans were submitted before the Wolf administration issued its latest reopening guidance, which says full, in-person instruction should be reserved for students in counties with a very low rate of new COVID-19 cases.

Some districts have already changed their reopening plans in response to the guidance, and others are expected to follow suit before the start of the school year, education officials said.

“This is going to be very fluid, and what districts think they’re going to do may look a lot different two weeks into the future based on transmission rates,” said Mark DiRocco, executive director of the Pennsylvania Association of School Administrators.

The state on Monday ordered nursing homes and other facilities for older adults to supply N95 respirator masks to staff who directly care for residents with COVID-19, or who are suspecting of having the virus.

“Many long-term care facilities have been working diligently to protect their staff from this virus. We have also heard from nurses and staff from across the state, and this order responds directly to their safety concerns," Dr. Rachel Levine, the state health secretary, said in a written statement.

The virus has taken a dreadful toll on Pennsylvania nursing and personal care homes, with more than 5,000 deaths — or two-thirds of the statewide toll.

This story has been corrected to show that Mertz said PIAA is “comfortable" that it can sanction fall sports, not “confident.”