Pipeline hack sends people scrambling for fuel in the South 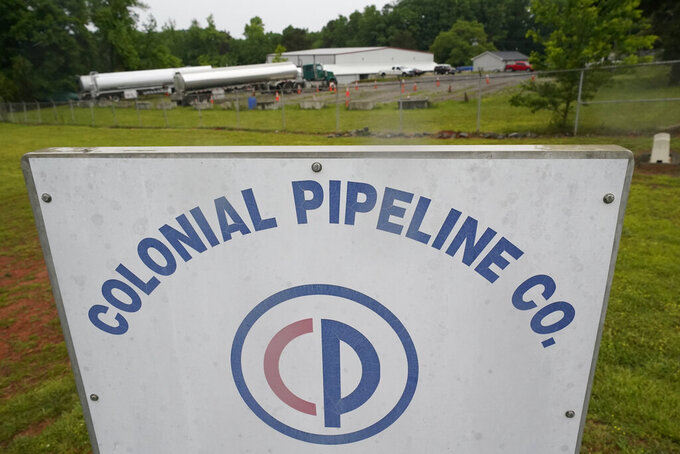 Tanker trucks are parked near the entrance of Colonial Pipeline Company Wednesday, May 12, 2021, in Charlotte, N.C. Several gas stations in the Southeast reported running out of fuel, primarily because of what analysts say is unwarranted panic-buying among drivers, as the shutdown of a major pipeline by hackers entered its fifth day. (AP Photo/Chris Carlson)

CLEMMONS, N.C. (AP) — A run on gas following a computer hack of the nation’s largest fuel pipeline had North Carolina tow-truck driver Jonathan King worried about whether he could do his job.

“I drive all over the place,” King said at a packed gas station outside Winston-Salem on Wednesday. “It gets really busy. And yeah, with the fuel going the way it’s going, it’s going to be very hard for us. Hopefully we’ll be able to get through it.”

The cybersecurity attack on the Colonial Pipeline has prompted fuel-hoarding and panic-buying in parts of the Southeastern U.S., striking fear and stress among those who've waited in long lines for gas. And while Colonial initiated the restart of pipeline operations late Wednesday, the company said it will take several days for deliveries to return to normal.

The scene at gas stations was far from typical Wednesday after governors of both North Carolina and Virginia declared states of emergency to help ensure supply and access to gas.

As people in the region emerge from the lockdowns and limitations of the coronavirus pandemic, some feared the prospect of lost wages and missed doctors appointments. They also worried about canceling plans with family members who they were only beginning to see again.

Mary Goldburg, 60, of Norfolk, Virginia, said she needs her car for work but also to see her grandchildren — whom she barely got to see last year. Her job includes delivering T-shirts for events and other promotional products.

“I can’t get paid until my customers get their products,” said Goldburg as a slow-operating pump filled her tank for more than 20 minutes at a 7-Eleven.

Construction worker Jamar Gatison, 36, was also filling up his tank there Wednesday before he had a doctor’s appointment.

“I’m about to run out of gas, so I have no choice,” Gatison said, adding that he is also is an Uber Eats driver but wasn't planning on delivering food that night because he didn't want to wait in line again.

Restaurants and bars, which are already struggling to fill job openings, will find themselves particularly squeezed, said Robert McNab, an economics professor at Virginia’s Old Dominion University. Some workers may not be able to come to work. And some customers may abandon plans to eat out.

“In all likelihood, these service workers will be impacted most significantly, with rising fuel and food prices eating a larger part of their household budgets and income being reduced this month by the fear-induced shortage of gasoline,” McNab said.

The Colonial Pipeline delivers about 45% of the fuel consumed on the East Coast. There is no gasoline shortage, according to government officials and energy analysts. But there has been a problem getting the fuel from refineries on the Gulf Coast to the states that need it, and officials have been scrambling to find alternate routes to deliver that fuel.

The distribution problems and panic-buying have been draining supplies at thousands of gas stations. On Wednesday, four to five cars were lined up at each pump at a Circle K in Clemmons, North Carolina, a community southwest of Winston-Salem along I-40.

Detlef Badorrek said he drove to four gas stations before he found one where he could fill up his car. He expressed concern that motorists may become a little more unnerved as the situation extends itself.

“I sense things could go a little bit more desperately as time goes by. So far, it’s reasonable,” he said.

But not for everyone, apparently. Two people were charged with assault after a fight over spots in a line at a Marathon gas station in Knightdale, outside Raleigh, on Tuesday afternoon, authorities said.

The man and woman arguing over spots each spat in the other’s face before the fight turned physical and a cellphone was damaged, police said.

Video posted on Instagram shows two cars bumped up against each other at a gas station. The woman was charged with simple assault and the man was charged with assault on a female and damage to personal property, police said. Both were cited and released with a pending court date.

In Walton County, Georgia, paramedic Jeff Lisle had just under a quarter-tank of gas in his Jeep — but no one knew of any stations near his house that had gas. So, he went to his garage and found a small amount in the cans he uses for his lawnmower in case he needed the extra boost to make it to work.

As for the ambulances he works in, “we have to buy fuel at gas stations like everybody else does,” he said. That means that whenever possible, the ambulances have been stopping to refuel when they’re lucky enough to drive past a station with gas.

Along the Appalachian Trail, which stretches from Georgia to Maine, hikers depend on car and van shuttles to access the trail and get supplies.

“Everybody’s out here buying from the same gas pumps, so the lines are long, some are out -- you’ve really got to look for it,” said Ron Brown, who operates Ron’s Appalachian Trail Shuttles and often takes hikers from Atlanta’s airport into the north Georgia mountains..

But he said that hikers are resourceful enough to get where they need to go.

“It will get rectified because it’s a big deal, and everybody needs gas,” he said. “We’ll just make due until it does.”