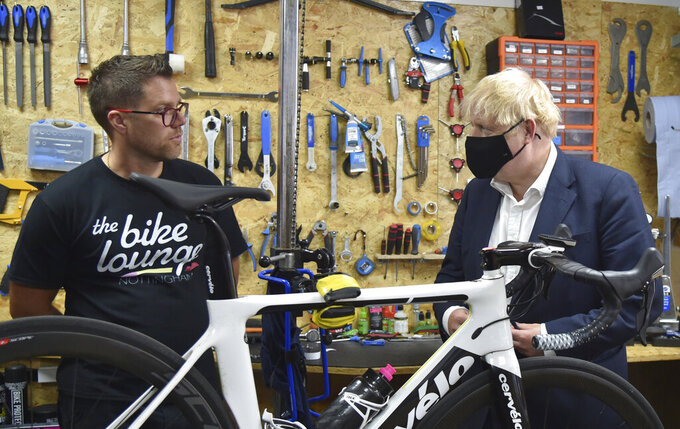 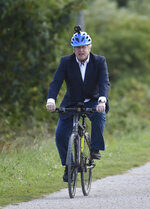 LONDON (AP) — A plan by British Prime Minister Boris Johnson to get more Britons cycling has got off to a rocky start, with a website offering bicycle repair vouchers crashing at launch.

The “fix your bike” vouchers worth up to 50 pounds ($65) are offered as part of the government’s 2-billion-pound plan to boost active travel. Johnson is simultaneously leading a crackdown on obesity, after a report published last week by Public Health England found that being overweight or obese can dramatically increase the risk of hospitalization and death from the coronavirus.

Johnson himself - who was hospitalized in intensive care with COVID-19 in April - admitted Monday that he was “too fat” and has long struggled with his own weight. In a video released to launch the government’s anti-obesity strategy, Johnson said he had lost at least 14 pounds after recovering from coronavirus, and urged Britons to follow his lead.

The government launched its offer of bike repair vouchers Wednesday, but a Transport Department statement said the website had been taken offline “following high levels of interest.”

Officials said the vouchers are being released gradually to ensure cycle repair shops can cope with the demand.

Government figures show there has been a surge in cycling following the coronavirus outbreak, with bike usage on roads in July nearly doubling that in March. Officials want to do more: family doctors in some areas are being encouraged to prescribe bike rides, with patients given access to bikes.

Britain is among countries with the highest obesity rate in Europe, and researchers leading a large-scale coronavirus symptom study said Tuesday that lockdown conditions have worsened the country's obesity problem.

Data released Tuesday by the team behind the Covid Symptom Study app, downloaded and used by 4 million people, showed that almost a third of those who responded to a survey - about 450,000 people - reported they had put on weight during lockdown.

Many are snacking more, moving less and eating less healthily, and some are consuming more alcohol, researchers said.

Officials this week announced they plan to help reduce obesity levels by prohibiting “buy one get one free” promotions on crisps and chocolate, and banning junk food ads on television before 9 p.m.

Officials hope the measures will help lessen the impact of coronavirus in the U.K., which, at nearly 46,000, has the highest official coronavirus death toll in Europe.