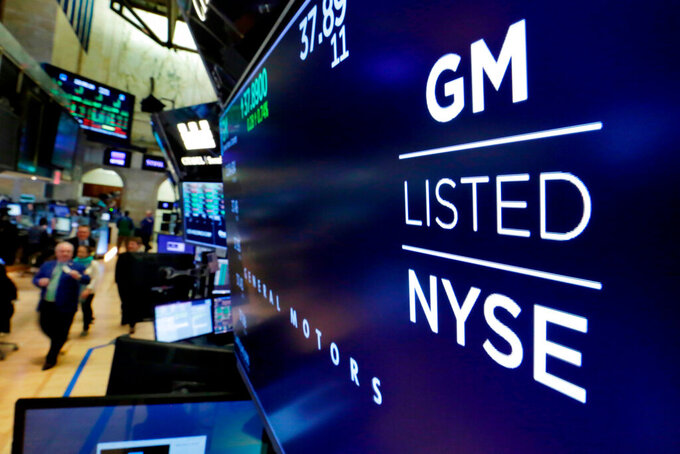 FILE- In this April 23, 2018, file photo, the logo for General Motors appears above a trading post on the floor of the New York Stock Exchange. Even though General Motors was able to reopen its U.S. factories for the last half of the second quarter, the company still lost $806 million from April 2020 through June. The Detroit automaker had to close its plants from March 18 to May 18 due to the coronavirus, but production didn’t resume fast enough to hold off a net loss. (AP Photo/Richard Drew, File)

DETROIT (AP) — Even though General Motors was able to reopen its U.S. factories for the last half of the second quarter, the company still lost $806 million from April through June.

The Detroit automaker closed its plants on March 18 and they remained idle for two months due to the coronavirus. Production didn’t resume fast enough to stem the losses.

Like other automakers, GM counts revenue when vehicles are shipped from factories, so it had little money coming in for about seven weeks in April and May.

The company reported a loss of 50 cents per share excluding one-time items. That was better than Wall Street expected, with analysts polled by FactSet predicting a $1.77 per-share loss.

Revenue was cut in half to $16.78 billion, but that also topped expectations.

GM burned through more than $9 billion during the quarter, including nearly $8 billion from operations and $1.1 billion in capital spending. It lost money before taxes in all of its business units save for its financial arm. In its traditionally profitable North America wing, GM lost $100 million.

The company raised borrowing on its revolving credit line to $16 billion to get through the crisis, pushing automotive debt to over $32 billion. It was $13 billion a year ago.

But Chief Financial Officer Dhivya Suryadevara said there is hope in the second half of the year. If U.S. sales continue at an annual rate of 14 million and production isn't disrupted, GM should generate $7 billion to $9 billion in cash from July through December, offsetting a large part of the first-half cash burn. The company should be able to repay its revolving credit line by year's end, she said.

She also said that if the recovery continues from the pandemic, GM expects pretax earnings of $4 billion to $5 billion in the second half of the year.

“There's a ton of uncertainty out there,” she said.

Sales in the U.S., GM’s most lucrative market, fell 34% for the quarter, even though executives said there is pent-up demand for vehicles, especially pickup trucks. GM has put many of its truck plants on three shifts as it tries to make up for lost production.

“These results illustrate the resiliency and earnings power of the business as we make the critical investments necessary for our future,” Suryadevara said in a prepared statement.

GM is seeing signs of improvement, and some areas, such as pickup trucks, have been constrained by low inventory levels as plants came back on line. “The company is working all avenues to increase U.S. dealer stocks and has restarted all U.S. truck and full-size SUV plants to three shifts," GM said.

U.S. sales tumbled 35% in April, but that improved to a decline of around 20% year over year in May and June, the company said.

The company also reported strong sales of new full-size SUVs such as the Chevrolet Tahoe and GMC Yukon. “They're flying off the dealer lots,” Suryadevara said.

CEO Mary Barra said the company would add 200 workers at its pickup truck plant in Fort Wayne, Indiana, to meet demand. Workers likely will be transferred from other GM factories.

With China recovering from the coronavirus outbreak, GM reported income of $200 million there. But its international operations, including China, lost a total of $300 million.

On a conference call with analysts, Barra wouldn’t rule out changing GM’s name so it better reflects the company’s commitment to electric vehicles.

“That’s something that we evaluate and look at when is the right time and what are the proof points that everybody looks at it and makes it real,” she said. “We’re going to make any changes necessary to drive the shareholder value.”

Barra was responding to a question from Morgan Stanley analyst Adam Jonas about changing the 111-year-old name to Ultium, which GM has chosen for its new electric vehicle battery system. Jonas said investors value electric vehicles more than internal combustion engines, which they see as a “melting ice cube” portion of the business.

She also said the company is open to evaluating a spinoff of its electric vehicle business into a separate company.

The whole auto industry was expected to struggle during the quarter as the pandemic cut into sales. Electric vehicle company Tesla may wind up the lone exception because it managed to post a $104 million profit. But Japan’s struggling Nissan reported a $2.7 billion loss (285.6 billion yen).