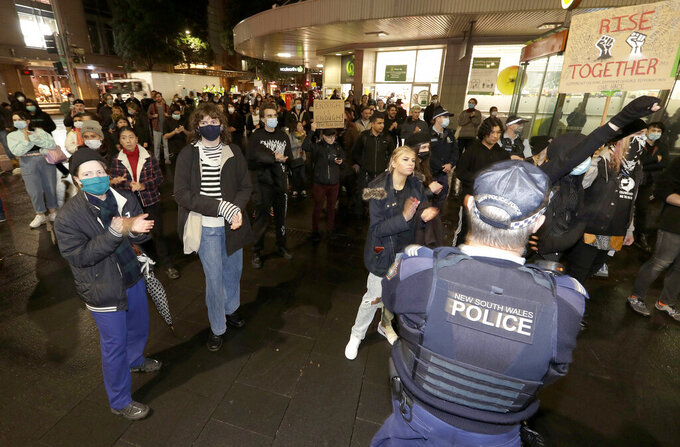 Police watch protesters that gathered in Sydney, Friday, June 12, 2020, to support U.S. protests over the death of George Floyd. Hundreds of police disrupted plans for a Black Lives Matter rally but protest organizers have vowed that other rallies will continue around Australia over the weekend despite warnings of the pandemic risk. (AP Photo/Rick Rycroft)

SYDNEY (AP) — Hundreds of police disrupted plans for an anti-racism rally in downtown Sydney on Friday, but protest organizers vowed that other rallies will continue around Australia over the weekend despite warnings of the coronavirus risk.

Police ringed Sydney Town Hall hours before around 3,000 people were expected to attend a rally inspired by the death of George Floyd while in police custody in Minnesota. Police vans were parked in side streets in preparation for mass arrests for breaching a 10-person limit on public gatherings because of the pandemic.

Protesters instead split, with about 100 dispersing around the hall while a few hundred converged on nearby Hyde Park.

Protesters in the park held a banner reading “Stand up Australia" near a statue. Those near the hall chanted “Too many coppers, not enough justice.” They appeared to obey police directions to leave or be arrested.

Government leaders have urged activists not to attend anti-racism and other rallies planned for the weekend due to the pandemic risk.

Rallies are planned for Australian cities this weekend over Floyd, the coronavirus risk posed to asylum-seekers held in crowded Australian immigration detention centers, and a pandemic threat created by eating meat.

Police largely did not enforce social distancing rules during peaceful anti-racism rallies attended by thousands in Australian cities last weekend that focused on the high incarceration rate of indigenous Australians.

“The very clear message is that people should not attend those events, because it is against the health advice to do so,” Morrison told reporters.

A court on Thursday ruled that a refugee rally planned for Sydney on Saturday is illegal because of the pandemic threat, increasing the range of powers available to police to block it.

Organizer Ian Rintoul said the protest would continue because asylum seekers are in urgent need.

“The point has come, even in terms of the COVID-19 experience in Australia, where the street protests are possible. They can be held safely, and I think we need to insist on that,” Rintoul told Ten Network television.

Animal rights group PETA plans to limit numbers at a Sydney protest on Saturday to avoid police attention. PETA blames the consumption of wildlife sold in Chinese wet markets for the pandemic.

“If a pandemic born out of animal abuse is not the best time to talk about and protest animal abuse, then when is?” PETA spokeswoman Aleesha Naxakis said.

Finance Minister Mathias Cormann suggested demonstrators could lose government welfare payments if they attend rallies, but Morrison later ruled out any such federal retaliation. The government pays a wage subsidy to 3.5 million Australians to keep them in work during the pandemic lockdown.

A protester became sick after attending a Melbourne rally on Saturday and later tested positive for COVID-19. Authorities suspected he was infected before the rally and might have spread the virus to other protesters. Authorities say any disease cluster caused by last weekend’s rallies might not become apparent for weeks.

Australia is relaxing its pandemic restrictions, with 2,000 fans allowed in Adelaide for an Australian rules football match on Saturday, but no protest rallies.

Melbourne is the state capital of Victoria, which is alone among Australia’s eight states and territories to experience community spread of COVID-19 in recent weeks. Most cases involve people who have returned from overseas.

Australia has not recorded any COVID-19 deaths since May 23, when the toll rose to 102. The country has confirmed 7,285 coronavirus cases and 524 cases remain active.