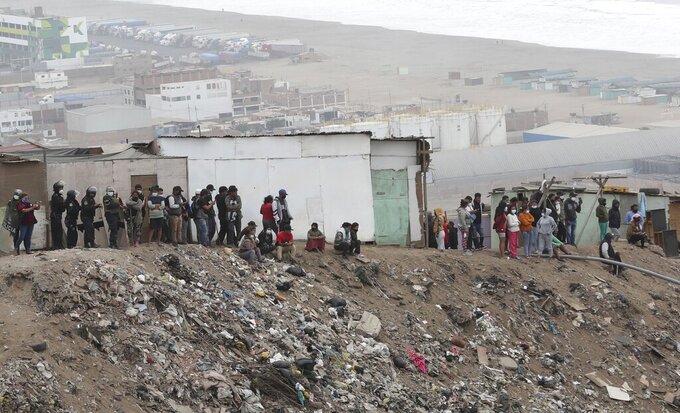 Squatters watch as police tear down their shacks in their recently formed settlement on a hilltop in the Villa El Salvador neighborhood, which had been occupied by mostly people who can no longer pay their rent because of restrictions on economic activity aimed at limiting the spread of COVID-19, in Lima, Peru, Wednesday, April 28, 2021. (AP Photo/Martin Mejia)

LIMA, Peru (AP) — Peruvian police raided a massive squatter settlement on the outskirts of the capital on Wednesday, using tear gar to help roust some 3,000 people, who battled back with stones and burning tires.

Officials said the settlement was built on the steep, unstable soil of a gravel mine that would be especially dangerous in earthquakes.

Peru's capital, Lima, is ringed by irregular settlements that have grown up over the decades due to a lack of affordable legal housing — a problem exacerbated by the coronavirus pandemic that has cost many people their sources of income.

But the government's social promotion secretary, Gisselle Huamani, told reporters the government had no plans to relocate the settlers. “They will have go go to their homes of origin, where they came from,” she said.

Researchers say people sometimes pay as much as $3,000 to criminal groups who organize land invasions — some of which are soon removed by authorities and others of which eventually win acceptance.

Peru's economy plunged by 11% last year due to pandemic restrictions, a loss felt especially by informal laborers and street venders who often found themselves unable to pay rent.