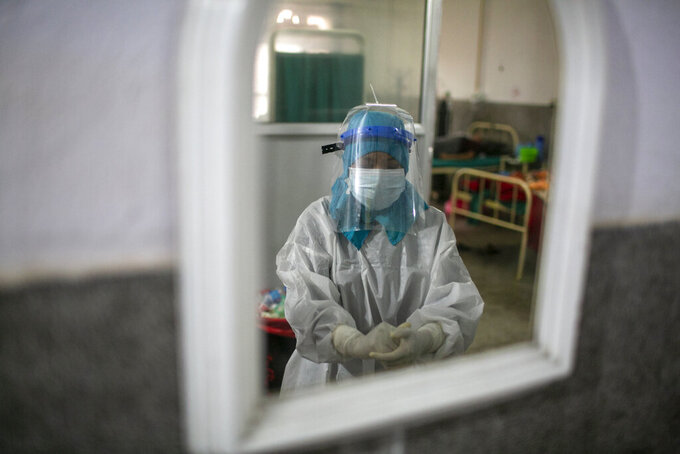 A nurse sanitizes her hands at a COVID-19 ward of a government run hospital in Kathmandu, Nepal, Wednesday, May 12, 2021. (AP Photo/Niranjan Shrestha)

KATHMANDU, Nepal (AP) — Political turmoil has returned to Nepal, which has had eight different governments in a decade and is experiencing its worst COVID-19 surge with acute shortages of health facilities and oxygen for patients.

Their hopes for stability lost, the people are angry at the government and the politicians they elected.

“The leaders have failed us again while people are dying in their homes, street and hospital parking lots while the politicians are fighting on who gets to be the prime minister,” said Hari Sah, a plumber who was trying to buy rice and lentils for his family in the two hours people are allowed to shop during an ongoing virus lockdown.

“These politicians are monsters who come to us for votes but when we really need their help they are busy hatching plans to grab power and indifferent to our sufferings,” said Narayan Magar, a driver who has been without work for months.

Khadga Prasad Oli became prime minister in 2018 with strong support from two-thirds of Parliament, but two splits in his ruling party this year helped push him out of office Monday. No political party now has a majority, and they're unlikely to agree to a coalition government anytime soon.

It is likely to be weeks before a new government is formed while the country struggles to cope with the pandemic.

The Himalayan nation has seen its highest new cases and deaths for the past few days, on Tuesday recording 9,483 new cases and 225 deaths, a near-30-fold increase in infections in one month.

Several hospitals in Kathmandu have stopped taking in new patients, declaring they have run out of beds and oxygen for patients.

Grande Hospital posted a notice that it wouldn't accept new COVID-19 patients because the 100 oxygen cylinders per day the government provided was barely enough.

Government hospitals are treating patients on corridor floors, in beds on verandas and in waiting rooms while relatives line up to get oxygen.

Yet the caretaker government isn't in a position to make major decisions to bring the country through the crisis.

“At the moment, all the political forces should have been working together putting aside all past differences to work to end the coronavirus crisis, but it is unfortunate for the nation and the people that they are focused entirely on who gets to be in power," said Bhojraj Pokharel, former chief of the election commission in Nepal.

Nepal has had eight governments in 10 years, 11 in 13 years and 25 governments in the past 30 years. Oli's Nepal Communist Party winning two-third of Parliament seats in the 2017 elections was a relief for the nation's people, who finally got what appeared to be a stable government that would complete a full term and work for development of the country.

That did not last, as a party faction began to press Oli for its own leader to succeed him. The party finally split earlier this year. Another faction within the remaining party did not support Oli during the confidence motion in parliament Monday.

Oli has been criticized since the coronavirus pandemic began last year because he spent more time on his party's squabbles.

His government has imposed lockdowns to try to curb infections but failed to work on preparations for further outbreaks. The latest lockdown, in effect since last month, has been extended to the end of May.

“Our biggest enemy is COVID-19 right now," Pokharel said. “To fight this big enemy, the nation needs to come together and all the forces need to unite for the battle."