Politicians eat own words after dining out, taking trips 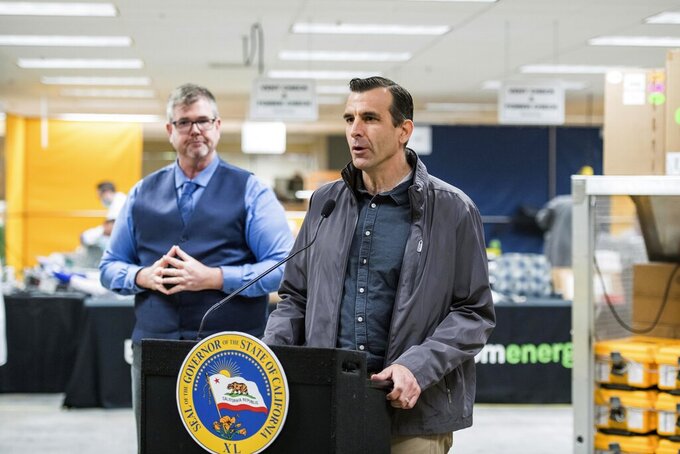 FILE - In this March 28, 2020, file photo, San Jose, Calif., Mayor Sam Liccardo speaks during a news conference at the Bloom Energy campus in Sunnyvale, Calif. The mayor of San Jose apologized Tuesday, Dec. 1, 2020, for a Thanksgiving get-together at his parents' home that violated California's coronavirus restrictions on gatherings with people from different households, which are limited to three under state rules. (Beth LaBerge/KQED via AP, Pool, File)

SAN FRANCISCO (AP) — Their messaging has been clear: wear a mask, stay 6 feet apart, and most importantly: stay home!

But their actions aren’t living up to the rhetoric, creating a real political problem for some of the most vocal leaders in California’s fight to contain the coronavirus.

First came Gov. Gavin Newsom, who won plaudits for issuing the first statewide stay-at-home order in the U.S. back in March. He broke the state rules when he and his wife were caught dining with 10 others at the posh French Laundry restaurant in Napa in early November with lobbyists and others from numerous different households, sitting close together, mask-less.

San Francisco’s mayor, London Breed, was at the same $350-a-plate restaurant a day later, dining with a San Francisco socialite and six others. Breed has also won accolades for imposing some of the strictest rules in California, keeping coronavirus rates relatively low. Her spokespeople haven’t responded to queries about how many households were there — state rules cap those at three. Her spokesman rubbed salt in the wound by saying she has been trying to support local restaurants. The French Laundry is 60 miles (97 kilometers) out of town.

San Jose Mayor Sam Liccardo on Tuesday fessed up to an outdoor Thanksgiving dinner at his parents’ home with people from five different households after tweeting that everyone should just stay home this Thanksgiving. And a Los Angeles County supervisor headed to dinner outside a restaurant hours after she voted against a measure that would have kept outdoor dining open, calling it “a most dangerous situation.”

“We’re all really feeling the strain of this, but there is really that element of hypocrisy. So many who are struggling right now, and then you see them going to these very fancy social affairs and mixing with folks outside their immediate bubble,” said Melinda Jackson, a political science professor at San Jose State University.

Other Democrats have also been caught flouting their own guidance. Austin, Texas, Mayor Steve Adler was forced to apologize Wednesday after a newspaper reported that he was in Mexico with family in November as he urged people to stay home amid worsening coronavirus caseloads, at one point recording a video during the trip in which he told residents back home that now was “not the time to relax.” The mayor of Denver, Michael Hancock, asked residents to “forgive decisions that are borne of my heart and not my head" after traveling to Mississippi for Thanksgiving while he told others to stay home.

White House Press Secretary Kayleigh McEnany called out what she called “Democrat hypocrisy" Wednesday as she displayed images of the same politicians.

“These Democrats do not follow their own edicts. They act in a way that their own citizens are barred from acting,” she said.

The revelations come at a critical time as the nation deals with a dramatic spike in case rates, hospitalizations and deaths. It’s more important than ever that we follow the rules, the public is told. But when the same leaders aren't following the guidelines themselves, their credibility is shattered and it makes it harder to trust that their guidance is solid.

Kim Elsbach, a professor of management at the University of California, Davis and Newberry chair in leadership, said consistency is critical to believing someone has integrity.

“One of the primary reasons people choose the leaders they do is because they believe they have ideals they can count on,” she said. “People are really stressed out by what they call uncertainty — not knowing what’s going to happen today, tomorrow or yesterday. When we choose leaders, we really want them to be consistent over time, especially in their values, their morals or their ideals.”

The mea culpas have been across the board, or not at all.

Newsom quickly apologized, saying he “made a bad mistake” but noting the gathering was outdoors. Within days, photos emerged showing the group in a room that was enclosed on three sides with a sliding glass door on the other, maybe meeting the technical definition of outdoors, but perhaps not the spirit.

Breed’s dinner was apparently in the same kind of room, the San Francisco Chronicle reported, which her spokesman noted was allowed in Napa County at that time, though she shuttered indoor dining in her own city three days later. She never rescinded the pandemic rule of six people-per-table. But there has not been an apology.

Liccardo, in San Jose, apologized quickly and pledged “to do better.”

While a spokesperson for LA County Supervisor Sheila Kuehl acknowledged her outdoor dinner, there was no “I’m sorry” either. And earlier in the pandemic, when surveillance cameras showed U.S. House Speaker Nancy Pelosi getting a blowout when San Francisco hair salons were closed, she declined to apologize too, arguing she was set up by the conservative salon owner.

Experts said that acknowledging your mistake and apologizing quickly are key to moving on from a political crisis.

“It’s better to just say ’I screwed up, it was dumb, I’m sorry, and it’s important that we follow these guidelines,' ” Elsbach said. “It only takes one event to lose that trust, that inconsistency, and it takes a long time to regain it.”

How can they move on in the midst of a crisis?

“I would say to absolutely be on their best behavior from now on," Jackson said.