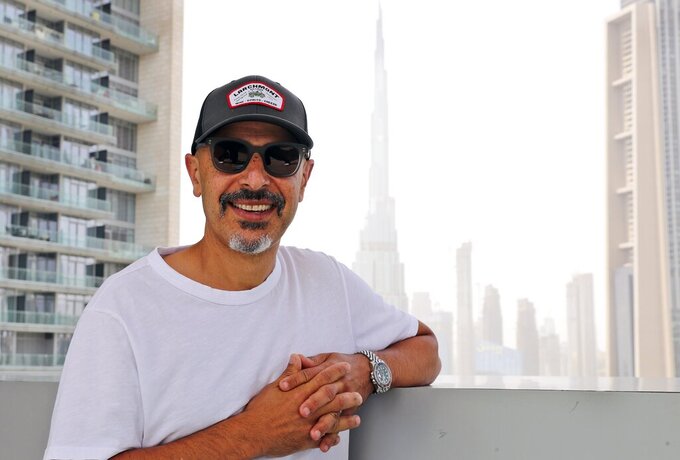 Stand-up comedian Maz Jobrani poses in Dubai, United Arab Emirates, Tuesday, May 25, 2021. For Iranian-American Maz Jobrani, a stand-up show in Dubai marked the first time he's been in front of a major live audience overseas since the start of the coronavirus pandemic and he feels it. (AP Photo/Kamran Jebreili)

DUBAI, United Arab Emirates (AP) — For Iranian-American Maz Jobrani, a stand-up show in Dubai marked the first time he's been in front of a major live audience overseas since the start of the coronavirus pandemic — and he feels it.

“Doing stand-up comedy is kind of like going to the gym — you have to get up on stage five, 10 times a week," said Jobrani, sitting in a Dubai hotel overlooking Burj Khalifa, the world’s tallest building. "You have to keep going or the muscles are going to be rusty.”

Jobrani had a calm demeanor during a recent interview with The Associated Press. It was a far cry from the exaggerated expressions and dancing he's known for in his performance.

Taking to the stage at the recent Dubai Comedy Festival, Jobrani broke into an Iranian dance routine to one of Dua Lipa’s hit pop songs, drawing laughter from an audience eager to be out as the coronavirus pandemic still rages across much of the world. The United Arab Emirates has one of the world’s highest per-capita vaccination rates and its economy largely has reopened.

Being on stage has become a luxury for comedians, Jobrani said, with some not being able to perform for over a year. After venues shut down last year, extra creativity was required. First, Jobrani started doing shows on Instagram, updating his fans on what he did daily during the lockdown, or doing workouts using random objects.

Then he tried drive-in shows, which posed the same problem for stand-up comedy as online video calls: “You don’t hear their laughter," he said. "You need to remind them: ‘If you like what I’m saying, if you like the joke, please honk,’” he recounted. “So people would honk at you, you tell a joke (and) they would honk at you.”

In some U.S. states, he performed at outdoor venues to a limited capacity audience. At others he performed indoors. In Arizona and Florida he performed in comedy clubs, where he said he felt nervous because it was before the vaccine was rolled out.

“Comedians need interaction — we’re best in a room, with an audience, laughing, talking," he said. “And this remote world took that away from us but again I think we adapted, a lot of people adapted.”

Jobrani, originally from Iran, moved to California at age 6 with his family. Like many Iranians they had fled the country's 1979 Islamic Revolution. He grew up in the San Francisco area.

His acting credits begin just after the Sept. 11 attacks with a major role in the American action series “24,” in which he played a member of an Afghan militant group hoping to detonate a nuclear bomb in Los Angeles.

Later he stopped taking such roles, but still played with the theme, setting up the “Axis of Evil” comedy tour. He wrote a book entitled “I’m Not a Terrorist, But I’ve Played One On TV.” His comedy is largely fueled by that and his background. During Donald Trump's term in office, he focused on the U.S. president.

Jobrani's visit to Dubai came at an edgy moment for the wider Middle East. Tensions still remain high between his native Iran and the U.S. as negotiations continue over Tehran's tattered nuclear deal with world powers as a hard-liner appears poised to take the presidency.

The day of his set, Israel and the Gaza Strip's Hamas rulers agreed to a truce after an 11-day war killed more than 250 people, mostly Palestinians in Gaza, and caused heavy destruction in the impoverished coastal territory.

While Jobrani discussed the conflict and the region's politics in an interview with the AP, he didn't mention it in his set.

“It’s interesting because what you do as a comedian, you know, your job is to make people laugh,” Jobrani said. “If I lived here and if ... I felt there was some injustice and I really wanted to speak up about it, I’d probably find the right way to do that within this society.”

The UAE only last year reached a diplomatic recognition deal with Israel and signed the accords at the White House with Trump — but Jobrani thinks Trump shouldn't be praised for the accord.

“There had not been a will to solve that problem, the Israeli-Palestinian" issue, he said. “I feel again maybe governments, especially America, did not prioritize it, even under Obama and then especially under Trump.”

“It was laughable that a lot of conservatives in America were like, ‘Well, Trump made peace in the Middle East,’" he said. "I go: ‘They weren’t at war, what are you talking about?’”

Life doesn’t seem to be slowing down for the comedian. He is continuing to tour, creating his podcast “Back To School With Maz Jobrani,” spending time with his wife and two kids and taking care of a dog they adopted during the pandemic.

But even as his jokes touch on politics, he says he feels whiplash from what he described as all the material — and chaos — of the Trump presidency.

“I will say I’m almost exhausted from it, it’s almost we’re suffering a PTSD from the past four years,” Jobrani said. "But the problem is, what I feel is injustice in the world has not stopped, it continues. So sometimes I’m like, ‘Oh God, I’ve got to get back on that roller coaster.’”