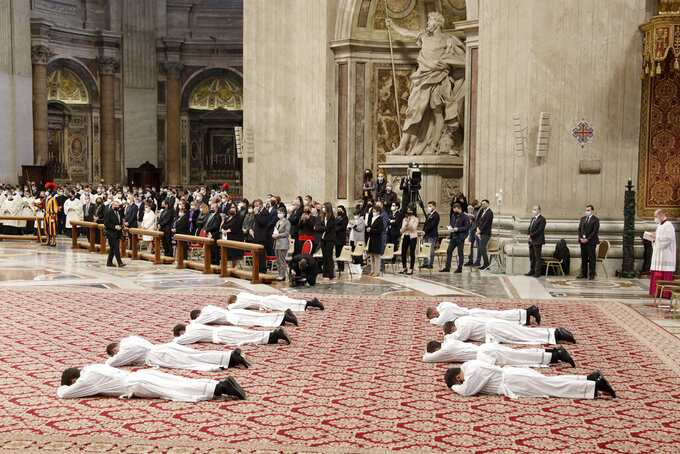 Nine new priests lie face down on the ground during their ordination ceremony lead by Pope Francis, inside St. Peter's Basilica, at the Vatican, Sunday, April 25, 2021. (AP Photo/Andrew Medichini)

VATICAN CITY (AP) — Pope Francis on Sunday gave the Catholic church nine new priests, encouraging them in an ordination ceremony in St. Peter’s Basilica to be humble and compassionate and to stay close to the rank-and-file faithful, whose trust in clergy has been sorely tested by decades of sex abuse scandals.

Professing obedience to the pontiff during the Mass on Sunday were six men from Italy and one each from Romania, Colombia and Brazil. The men removed their masks, part of COVID-19 safety protocols, when they knelt before Francis and he lay his hands on their head as part of the ordination ritual. At another point of the ceremony, the nine lay prostrated on a carpet in front of the basilica's central altar in a sign of obedience, humility and giving of oneself.

Shortages of locally ordained seminarians have in recent decades seen priests be transferred to predominantly Catholic countries like Italy from Asia and Africa, where seminaries are still attracting many recruits.

Sexual abuse scandals in the priesthood have eroded many Catholics' confidence in their church.

In an improvised homily, Francis instructed the nine to stay close to God, to their bishop and among themselves, but “most of all to the holy faithful people of God” from whose ranks they come. He told them to please stay away from vanity, pride and money, lest they become “businessmen priests.”

“If you do that, don't be afraid, all will go well,” in their new roles as priests, Francis said.

Financial scandals and instances of clergy living in posh quarters, including at the Vatican, have tainted the church's teaching that humility and poverty are virtues.

One of the newly ordained is a 40-year-old Italian who had worked as an artistic director before deciding he wanted to become a priest. Another Italian said in his biography that he loves soccer and had even tried out for Roma, one of the Italian capital's major league soccer clubs, but turned down an offer to study for the priesthood instead.

Last year, with Italy in the first wave of the pandemic, the basilica ordination by the pope was skipped. This year, at the ceremony's end, Francis, looking relaxed, after taking a group photo with the new priests still wearing their masks, asked the nine to remove their masks for another photo opportunity, and smiling, the nine eagerly complied.