Pope's ex-envoy tried in Paris for sex assaults, without him 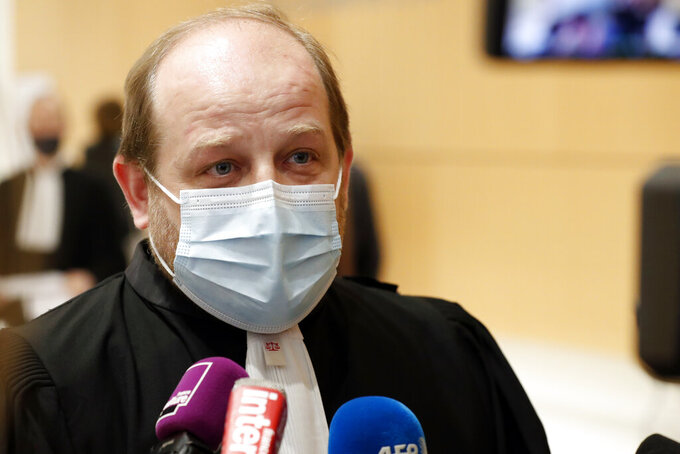 PARIS (AP) — A sexual assault trial for the Vatican’s former ambassador to France went ahead without him Tuesday after he produced a doctor's note saying it was too dangerous for him to travel from Rome to Paris in the midst of France's resurgent coronavirus epidemic.

Lawyers for the accusers of retired Archbishop Luigi Ventura asked that the trial be pushed back because he wasn’t present.

But the court ruled against a postponement and then heard detailed testimony from multiple men that Ventura groped their buttocks in public settings.

The accusers included a former seminarian, Mahe Thouvenel, who said he was grabbed repeatedly by the clergyman when they celebrated Mass in December 2018.

“These are facts that happened to me, that hurt me, and I suffered a lot," he said.

Asked in court what he would have said to Ventura had the former envoy attended the trial, Thouvenel replied: “Monseigneur, why did you do that?”

Represented by his defense team, Ventura was tried in absentia on five counts of alleged sexual assault. Three of his alleged victims who filed police complaints of groping and inappropriate touching on their buttocks were in court.

Ventura has repeatedly denied wrongdoing. Sexual assault is punishable by up to five years imprisonment and fines in France.

His lawyer, Solange Doumic, argued that the case had been blown out of proportion, to become “the trial of the Vatican, of hidden homosexuality at the Vatican.”

She characterized the accusations as “minor." She said Ventura touched hips or backs but his intentions were never sexual, that any gestures lasted no more than a few seconds, and that he might not have realized they could be regarded as inappropriate. She also said Ventura had experienced behavioral problems since he was operated on for a brain tumor in 2016.

Explaining his absence to the court, she said Ventura's doctor deemed it “completely unreasonable” for the 75-year-old to travel to Paris as its hospitals are again struggling to handle coronavirus cases.

But during Tuesday's hearing, the prosecutor, Alexis Bouroz, produced a Vatican letter that said Rome still reserves the right not to apply any eventual punishment for Ventura, if he is convicted.

The prosecutor agreed that the trial should proceed without Ventura. He said he didn't believe the retired archbishop would come for any future court hearings, and so delaying it would just waste time.

“The only question I ask myself is why does he deny the facts?” he said. “This question will remain unanswered.”

He asked for a 10-month suspended jail term.

Lawyers for the alleged victims seethed at the suggestion that the Vatican could spare Ventura punishment, if he is convicted.

“The Holy See doesn’t give a hoot for your deliberations,” Thouvenel's lawyer, Edmond Frety, told the three judges.

The court said it would deliver its verdict on Dec. 16.

Thouvenel said his seminary kicked him out after he filed a police complaint. Under questioning from Ventura’s lawyer, he put his right hand on the top of his right buttock to show one of the spots where he was allegedly groped.

“It’s violent,” Thouvenel said. “It sticks in your memory.”

Another of the accusers, Mathieu De La Souchere, alleged that Ventura touched his buttocks repeatedly during a reception at Paris City Hall.

The judge said that, during prior questioning, Ventura explained his behavior by saying he had a "Latin" temperament and that there was nothing sexual about his gestures.

The Vatican recalled Ventura last year and he later retired. The Vatican has recalled other diplomats when they get into trouble during overseas postings.

In the most high-profile case, the Vatican recalled its ambassador to the Dominican Republic and prepared to put him on trial in the city-state’s criminal tribunal for allegedly sexually abusing young boys. But he died before the trial started.

Ventura's trial came the same day that the Vatican released a much-awaited report into Theodore McCarrick, a once-influential American cardinal who was defrocked by Pope Francis in 2019 after a Vatican investigation confirmed decades of rumors that he was a sexual predator.