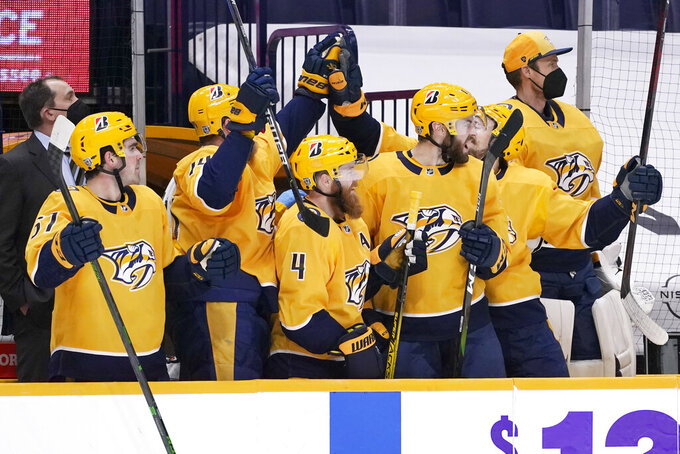 Nashville Predators players celebrate on the bench after a goal against the Columbus Blue Jackets in the third period of an NHL hockey game Sunday, Feb. 28, 2021, in Nashville, Tenn. (AP Photo/Mark Humphrey)

The Predators, who have won four of five, made the moves Tuesday afternoon after the trio didn't take part in the morning skate before a game against Carolina.

Ellis will be out up to six weeks with an upper-body injury. The defenseman hadn't missed any of Nashville's first 21 games and trails only Filip Forsberg and Roman Josi for scoring with nine points. Ellis played 26 minutes, 8 seconds in the Predators' 3-1 win over Columbus on Sunday.

Kunin is expected to miss two to four weeks with a lower-body injury. He has played 17 games and has two goals and three assists.

The center has only been back four games after an upper-body injury Feb. 4 against Florida. Johansen has only five assists and has yet to score a goal this season.