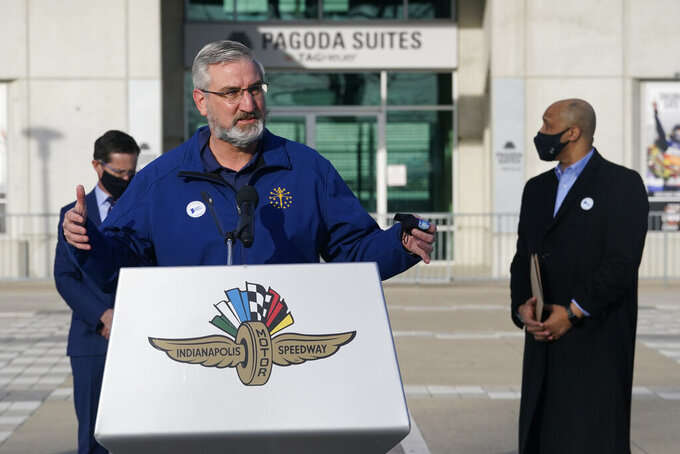 INDIANAPOLIS (AP) — Indiana legislators are turning aside — for the second straight year — an appeal from Gov. Eric Holcomb for a law requiring more businesses to provide workplace accommodations for pregnant women.

Such steps, such as longer breaks or transfers to less physical work, are cast by supporters as ways of improving Indiana’s infant mortality rate, which federal statistics show was the country’s 14th worst in 2018 with 525 infant deaths.

But Republicans who dominate the Legislature have sided with major business groups rather than the GOP governor on the issue. After rejecting a Holcomb-backed bill last year, lawmakers are advancing a proposal that would prohibit businesses from retaliating against women who ask for accommodations but would not require managers to grant any of the requests.

Republican Sen. Chip Perfect, whose family owns the Perfect North Slopes ski area near Lawrenceburg, said he still believed the proposal went too far as many businesses are struggling to find workers and are willing to grant reasonable requests from pregnant women. He also said that pregnant women whose accommodation requests aren’t met can leave those jobs.

“If you can’t get people, and you have employees that you have mistreated disparaging you, you even further can’t get good people,” Perfect said. “Everything in this bill is something that can already be done. It is not reflective of the world that we’re living in right now.”

Samantha Kern of Fishers gave a state Senate committee a much different account this past week. Kern said she was pregnant and started bleeding while working at an Indianapolis hospital and that her doctor told her to go immediately to the hospital’s obstetrics unit because of previous miscarriages.

But Kern said her supervisors wouldn’t let her leave until she found a co-worker to take over for her and that she didn’t leave for nearly two hours out of fear she would lose her job and her family’s health insurance coverage. She said her baby died.

Kern called the current bill “detrimental” because it provides no true protections.

“As it stands right now, it’s useless,” Kern said. “It’s not something that we can revisit later on to rebuild off of. It’s not right.”

Holcomb touted his backing of greater pregnancy accommodations during his State of the State speech in January but has accepted the current bill as the best he’ll get from the Legislature even though about 30 other states already have such laws.

The governor said after the House advanced the weaker bill in February that his goal was “not going to come to fruition, that’s been a message received” from lawmakers.

“I’m going to support a step in the right direction,” Holcomb said. “But I’m also looking at ways to make sure I can be persuasive in the future.”

The current bill passed the House in February by a 95-2 votes as even lawmakers wanting tougher regulations supported it as a way of getting some protections for women into state law. The state Senate could vote on the bill this coming week.

Senate President Pro Tem Rodric Bray said many lawmakers were hesitant to put more regulations on businesses, especially in the midst of the COVID-19 pandemic.

“Putting more responsibility, more potential for liability and more challenges on businesses is not necessarily appealing to a lot of folks,” Bray said.

Some major business groups, including the Indiana Chamber of Commerce and the Indiana Manufacturers Association, have raised worries about possibly exposing more businesses to lawsuits by requiring them to provide accommodations.

“It maintains what we call an interactive process, where you work with your employees to find reasonable accommodations,” Berger said. “There’s not a set list where it becomes, instead of this action, it’s contentious now between you and your employees.”

She said the Legislature’s unwillingness to adopt requirements helping pregnant women in the workplace was ironic at a time when another bill was advancing that would require doctors providing abortion drugs to women to inform them about a disputed “reversal” procedure.

“If the same woman, four or five months later, develops pregnancy complications, we’re not willing to require her employer to do a reasonable pregnancy accommodation — extra breaks, a food and drink policy change — for her to help protect her baby and her pregnancy and maybe even her own health,” Dixon said.