With primary over, attention shifts to Michigan's fall races 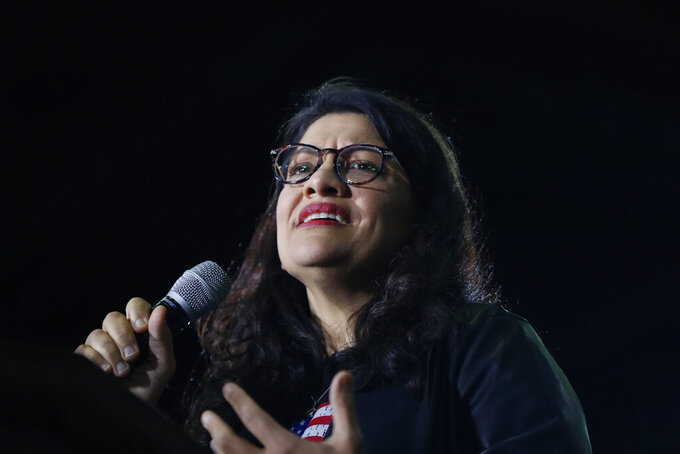 FILE - In this March 6, 2020 file photo, Rep. Rashida Tlaib, D-Mich., speaks at a campaign rally in Detroit. Tlaib won a challenge for her House seat in Michigan's Tuesday, Aug. 4, 2020 primary, in a rematch with the woman she narrowly defeated two years ago. Tlaib, one of the first two Muslim women in Congress, easily secured likely re-election to the 13th District in and around Detroit. Her opponent in the primary was Detroit City Council President Brenda Jones. (AP Photo/Paul Sancya, File)

LANSING, Mich. (AP) — With the primary complete, Michigan candidates on Wednesday quickly turned their focus to November — when voters in the presidential battleground will also decide a competitive U.S. Senate race, several House contests and which party controls a legislative chamber.

Tuesday's election, held during the coronavirus pandemic, was marked by a record number of absentee ballots that is only expected to grow in three months.

What to look for this fall:

Both first-term Democratic Sen. Gary Peters and Republican challenger John James were unopposed in the primary. Peters, who has led in polling, is one of two Democratic incumbents running in a state President Donald Trump carried in 2016.

He is emphasizing his bipartisan work and push for federal funding amid the health and economic consequences of the coronavirus pandemic. His campaign has questioned James' past unequivocal support for Trump, his opposition to the health care law and has said voters cannot trust him.

James, a Black veteran who runs a family automotive logistics company, is criticizing Peters as a career politician who has failed to attend congressional meetings and receives health coverage from a legislative retirement system instead of an “Obamacare” exchange.

In the Thumb-area 10th District being vacated by retiring second-term Republican Rep. Paul Mitchell, business executive Lisa McClain won the GOP primary and is well positioned to win in November.

McClain spent more than $1.4 million of her own money — more than $900,000 above the amounts raised by state Rep. Shane Hernandez and retired Brig. Gen. Doug Slocum, who led the Selfridge Air National Guard Base.

In 2018, Democrats Elissa Slotkin and Haley Stevens flipped GOP-held seats and may be positioned to hold them amid Republicans’ candidate recruiting difficulties and Trump’s struggles in the suburbs around Detroit.

In Slotkin’s 8th District, which stretches from Lansing to northern Oakland County, newcomer Paul Junge won a four-candidate contest. He was an immigration official in the Trump administration.

The 11th District in parts of Oakland and Wayne counties had a five-way GOP primary to see who goes against Stevens. Eric Esshaki, a business attorney and former nurse, was leading.

Democrats are looking to take control of the Michigan House for the first time in a decade. Republicans have a 58-51 edge and a big financial advantage.

Absentee voting surged during the virus outbreak. About 1.6 million absentee ballots were cast — breaking the record of nearly 1.3 million set in the November 2016 presidential election and also surpassing the nearly 900,000 cast in the March presidential primary. The absentee ballots accounted for three-quarters of all votes.

Secretary of State Jocelyn Benson called the election a “success,” with no reports of anyone waiting in lines when polls closed.

“We are ready for November,” said Benson, who again urged the Legislature to allow clerks to start processing absentee ballots before Election Day. She said the number of absentee ballots could double in the fall.