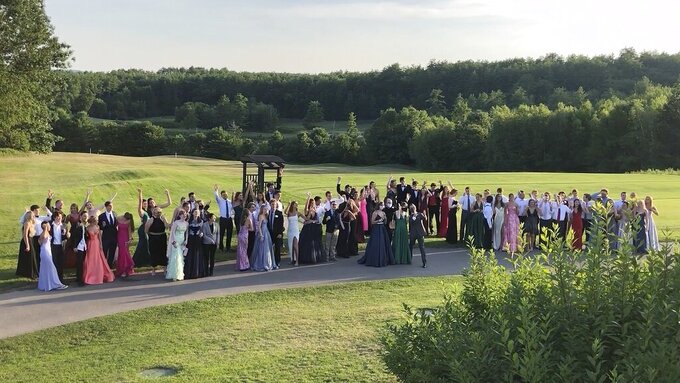 In this Saturday, July 18, 2020, image provided by Carol Justic, recent Bedford High School graduates and students pose for a photo at their outdoor prom outdoor at the Stonebridge Country Club in Goffstown, N.H., organized during the coronavirus pandemic. Amid the debate over how to reopen schools safely, some teens and parents are organizing private proms to replace events canceled because of the coronavirus. (Carol Justic via AP)

CONCORD, N.H. (AP) — Bedford High School canceled its senior prom, and a persistent pandemic means prospects for dances to be held this fall are slim to none.

But nearly 100 recent grads got dressed up last weekend for a private prom, one of several held around the country just as the debate over safely reopening schools ramps up.

In some places still ravaged by the virus, plans were called off. In New Hampshire, at least, officials are largely staying out of the way as long as organizers and participants follow distancing guidelines meant to keep the coronavirus in check.

“We’re asking folks to be smart about it, but I’m not going to be the guy in ‘Footloose’ who says, ‘No dancing in my town,’” Gov. Chris Sununu, a Republican, said last month.

New Hampshire rules for wedding and event venues don’t prohibit dancing but strongly discourage it unless dancers stick with members of their own household or remain 6 feet (2 meters) apart.

In Missouri, Jefferson City High School seniors organized their own June 30 prom after their original event was canceled. In Michigan, Chippewa Valley High School parents have scheduled a combined prom, after party and senior awards banquet for Wednesday.

But plans to host private proms were abandoned this month in Montana and Georgia amid rising numbers of COVID-19 infections. And health officials in Illinois said 10 people associated with an “unofficial prom” held at a home in June later tested positive for the virus.

The Bedford High prom was held Saturday in a tent at the Stonebridge Country Club in Goffstown. While more than 300 seniors graduated, attendance was capped at 100 tickets, and not all were sold.

Carol Justic, whose daughter attended and who was there herself as a chaperone, said she had initial concerns about food service and dancing but ended up being impressed. Chaperones made sure no more than six teens were at each table, and students wore their masks when entering and exiting the tent, she said.

“As a mom it makes you proud and teary because they’re doing the right thing,” she said.

Though the students posed together for a group photo, they were instructed to stand near friends with whom they had arrived or were sitting, said Andrea Gately, who helped organize the prom for her son and his classmates.

She cited two main reasons: The “right of passage” the event often represents and “the girls who had always dreamed of going to senior prom and they buy these fabulous dresses, and they don’t have an opportunity to wear them.”

“Everyone I’ve talked to is saying, ‘Thank you for doing this for the kids,’” she said.

Justic said she did see some criticism on social media, but that most parents were supportive. And unlike in the 1984 Kevin Bacon movie “Footloose,” in which rebellious teens defy authority figures to hold a dance of their own, there wasn’t much dancing on Saturday.

“They were a little nervous, but they also were a little done at that point,” she said. “Once they got to see each other and say their goodbyes, I think they’d turn the page a little bit.”