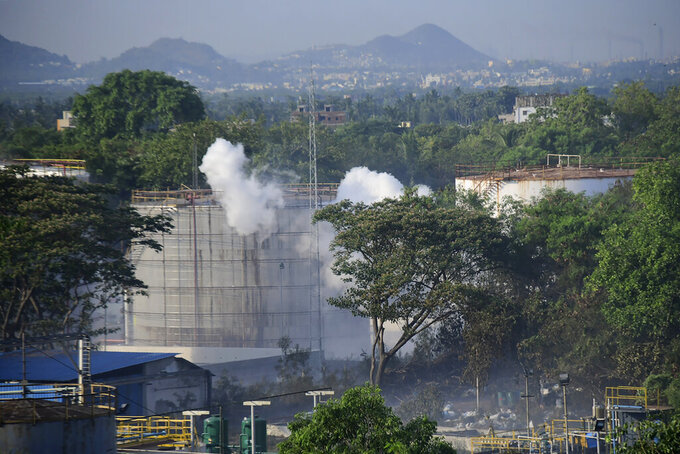 FILE - In this May 7, 2020, file photo, smoke rises from LG Polymers plant, the site of a chemical gas leakage, in Vishakhapatnam, India. A committee appointed by India’s top environmental court has blamed “gross human failure” and lack of basic safety norms for a gas leak in a South Korean-owned chemical factory this month that killed 12 people and sickened hundreds. (AP Photo/File)

The committee said the tanks from which the gas leaked May 7 at the LG Polymers plant in Vishakhapatnam, a port city in Andhra Pradesh state, were outdated and lacked temperature sensors.

Workers at the factory were slow to respond to the leak and the chemical company lacked experience in monitoring and maintaining tanks full of chemicals that sat idle for weeks due to India’s coronavirus lockdown, said the committee's report, which was issued Thursday and accessed and reviewed by The Associated Press.

LG Polymers is owned by LG Chem Ltd., South Korea’s largest chemical company, which produces a range of industrial products, including petrochemicals, plastics and batteries used in electric vehicles. It is part of the family-owned LG Corp. conglomerate, which also has an electronics arm that globally sells smartphones, TVs and computers.

The gas that leaked from the plant was styrene, which is used to make plastic and rubber. Styrene gas is a neurotoxin and can immobilize people within minutes of inhalation. It can be fatal at high concentrations.

Days after the mishap, the AP found out that the plant lacked environmental clearance before the leak.

LG Chem had maintained that LG Polymers India operated the plant “while abiding environmental regulations” and said it was closely monitoring efforts to handle the aftermath.

After the leak, police charged LG Polymers with culpable homicide, including negligence in handling toxic substances.