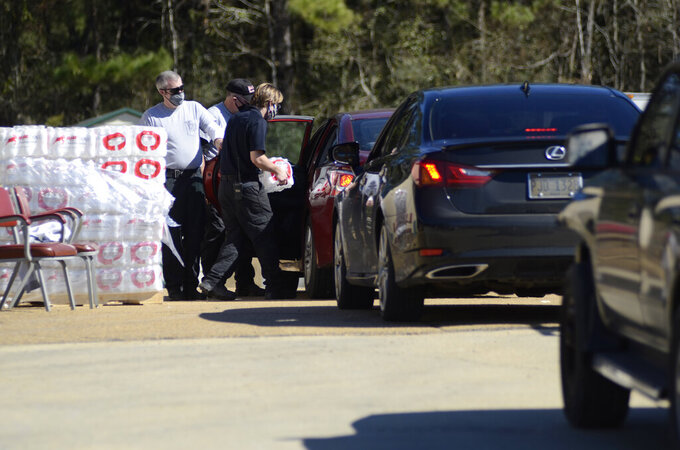 Firefighters, from left, Matthew Wheat, Warren Agnor and Zach Schilling, place bottles of water into residents' vehicle on Saturdasy, Feb. 20, 2021, in McComb, Miss., where residents are under a boil-water notice after the city lost water pressure during recent winter weather. (Matt Williamson /The Enterprise-Journal via AP)

NEW ORLEANS (AP) — Progress is being made to restore electricity across parts of Louisiana and Mississippi that have experienced outages this week as a result of freezing cold temperatures, but challenges remain in getting water services restored.

Entergy, which provides service to customers in roughly half of Mississippi's counties, said Friday that it expected most of its customers to regain service by the beginning of next week, the Clarion-Ledger reported Sunday. In a news conference Friday, President and CEO of Entergy Mississippi, Haley Fisackerly, also warned customers to slowly ramp up their usage once their electricity comes back so they don't overload their systems, the newspaper said.

The state's Department of Health canceled drive-thru coronavirus vaccinations in three counties Sunday — Adams, Lee and Washington — as a result of weather, the department reported on its Twitter feed. They said those appointments are being rescheduled.

Communities in both states are still working to restore water services after the freezing temperatures iced equipment and caused water lines to burst. In a sign of how far-reaching the problems were, dozens of towns and water associations had reported to the state that they had customers under boil water advisories that started when the harsh weather kicked in.

In Jackson, the entire city of about 161,000 residents is still being advised to boil water before drinking it as officials work to restore water to city residents. City officials Saturday delivered water to elderly and homebound residents.

The city's public works director, Charles Williams, said Sunday that there was still no definitive timeline for when water service would be fully restored.

“We are working as hard as we can to get this resolved. We know the patience is thin,” he said in a telephone interview. He said the weather was so cold that it froze equipment at the city's two water treatment facilities.

As temperatures started to rise and the equipment thawed, they're now encountering problems with sensors and other types of equipment damaged by the freeze and are currently troubleshooting those problems, he said. There's also concern that as they start pushing more water out from the treatment plants through the water lines they will encounter more breaks due to the weather.

He said residents who live furthest from the treatment plants have had the biggest problems with many of those people having no water at all while others who live closer have seen low water pressure.

In a statement posted on the city's Facebook page Saturday, officials said the pressure, measured as pounds per square inch, needed to reached 90 psi at one location and 80 psi at another but as of Saturday evening was only at 55 psi.

As of Saturday evening, there were 13 water main breaks in the city, the statement read.

Many Louisiana cities have also been hammered with water delivery problems as a result of the icy temperatures.

In southwest Louisiana where residents were still recovering from hurricanes last year, many residents last week were left struggling with no water after pipes burst around the region. The City of Lake Charles said on its Facebook page Sunday that it was continuing to see a return to normal water pressure. The National Guard distributed bottled water to residents Sunday at the Lake Charles Civic Center.

Water was also distributed at sites in Shreveport and more rural areas of Caddo Parish Sunday that have also struggled with water problems as a result of the storms.

In a statement Sunday, the city of Shreveport said they hope to have water fully restored by Tuesday. They said during parts of the storm the system's entire 70,000 customers were without water. They still have 10,000 customers with what they described as “below minimum water service.”

Louisiana state officials are also urging residents who were affected by the cold weather this week to fill out a survey so that state and local officials can get an idea of the extent of the damage.