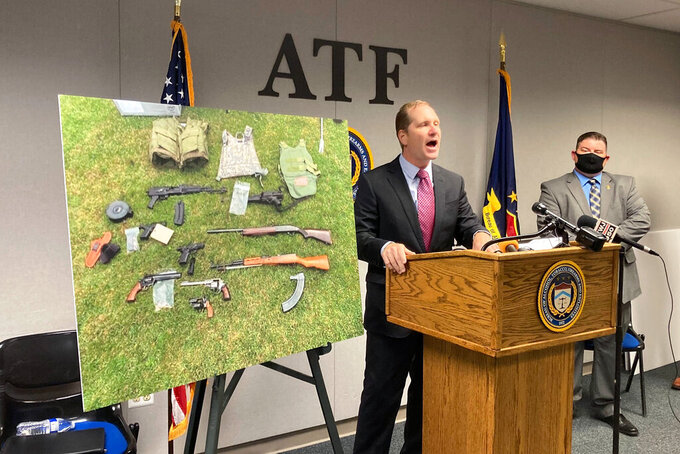 U.S. Attorney Matthew Schneider announces Wednesday, July 29, 2020, that dozens of federal agents and deputy marshals are being assigned to Detroit to combat gun violence and arrest fugitives. Detroit police said hundreds of guns were seized in a recent four-week period. Schneider added that "federal troops" are not patrolling the streets and he dismissed as "irresponsible rhetoric" any suggestion that the government wants to disrupt lawful protests against racism and excessive police force. (AP Photo/Ed White)

MADISON, Wis. (AP) — Federal prosecutors worked Wednesday to dispel concerns that federal agents headed to a number of U.S. cities will be used to break up protests, insisting that the agents will work side-by-side with local and state investigators to solve violent crimes.

President Donald Trump recently sent federal agents to Portland, Oregon, to protect federal property during the almost daily protests in the city since the May 25 death of George Floyd in Minneapolis. The move has drawn heavy criticism because the agents have been accused of overstepping that mandate, arresting people without probable cause, whisking them away in unmarked cars and using excessive force. Oregon's governor, Kate Brown, said Wednesday that the agents would begin a “phased withdrawal” from Portland starting Thursday.

Trump announced last week that he was sending agents to more U.S. cities, including Chicago, Cleveland, Detroit and Milwaukee, to combat a rise in violent crime as part of an operation that started last year. The operation was dubbed Operation Relentless Pursuit but was renamed Operation Legend after 4-year-old LeGend Taliferro was shot and killed in Kansas City, Missouri, last month.

That announcement that federal agents would be deployed through Operation Legend raised fears among Democrats that those agents' real mission would be to bust up protests and make liberal-leaning cities look bad as Trump seeks to win re-election.

“This president is abusing his power and public resources to fuel a twisted campaign strategy,” Libby Schaaf, the mayor of Oakland, California, said during a conference call with reporters Wednesday.

Matthew Krueger, the U.S. attorney in Milwaukee, told reporters during a news conference earlier Wednesday that the media was confusing agents' missions. Agents being sent to cities other than Portland were part of a U.S. Department of Justice effort to bolster manpower in high-crime cities dubbed Operation Legend, he said. That initiative began in December. It was supposed to have been expanded this spring but the coronavirus pandemic delayed that move until this month, he said.

Krueger said he spent the last week updating local and state authorities in Wisconsin on the agents' mission and stressed that the agents wouldn't be used to go after protesters and instead would work with local authorities, just as federal agents have long done.

“If you use the words Portland, Oregon, you only sow confusion,” he said. “You will not see federal agents amassing on the streets of Milwaukee. These aren't beat cops. They're trained investigators."

He said a total of 25 to 30 agents from the FBI, the U.S. Drug Enforcement Administration, the U.S. Marshals Service and the Bureau of Alochol, Tobacco and Firearms would be deployed in Milwaukee. Ten who arrived this month are in the city temporarily. The others will be permanently assigned to the city.

U.S. Sen. Tammy Baldwin, a Democrat from Wisconsin, said that after speaking with Kreiger, she is supportive of the operation in Milwaukee. She said she was pleased that he was clarifying the mission and faulted Trump’s administration for not being clear from the outset.

“I’m glad there’s been some clarification and we want to be kept apprised, very frequently, about what this operation is about,” Baldwin said in a Milwaukee Press Club online event.

In Detroit, federal authorities said dozens of agents and deputy marshals were being assigned to the city to combat gun violence and arrest fugitives, among other tasks. They will collaborate with the local police.

Matthew Schneider, the U.S. attorney for eastern Michigan, said “federal troops” would not be patrolling the streets and he dismissed as “irresponsible rhetoric” any suggestion that the government wants to disrupt lawful protests against racism and the excessive use of force by police.

During a news conference Wednesday, the U.S. attorney for the northern district of Ohio said Operation Legend in Cleveland and surrounding communities will involve 25 agents from the FBI, Drug Enforcement Administration and Bureau of Alcohol, Tobacco, Firearms and Explosives assisting local and state law enforcement agencies.

Democratic mayors said on their conference call that they were afraid Operation Legend could quickly shift toward breaking up protests. Tim Keller, the mayor of Albuquerque, New Mexico, said his city was set to receive agents but had no formal agreement with the Justice Department on their mission.

“These missions change at the whim of the White House,” Keller said. “There's no reason to trust words at a press conference any more with this administration.”

Associated Press writers Scott Bauer in Madison, Ed White in Detroit and Mark Gillispie in Cleveland contributed to this report.