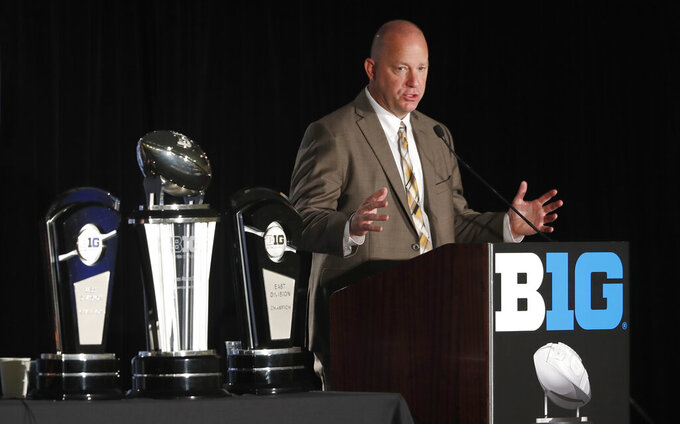 FILE - In this July 19, 2019, file photo, Purdue head coach Jeff Brohm responds to a question during the Big Ten Conference NCAA college football media days, in Chicago. Brohm believes college football can be played in the spring and next fall. And he even has a formal proposal. Just two days after the Big Ten announced it would postpone all fall sports, Brohm released a seven-page plan that calls for an eight-game conference only spring season followed by 10-game falls season. (AP Photo/Charles Rex Arbogast, File)

On Thursday, two days after the Big Ten postponed fall sports, Brohm released a detailed, seven-page proposal that calls for an eight-game season in the spring and a 10-game season next fall, a reduction in padded practices and a months-long break from the sport between seasons.

“I always thought we (the conference) should have had a backup spring plan ready. I was frustrated they didn't," he told The Associated Press during a telephone interview. “There are going to be some people that maybe don’t agree with it. But at the same time, if we really play want to play football then let’s make this season work."

At least it's a conversation-starter as one of the bleakest weeks in college football history comes to an end. Leagues including the Big Ten, Pac-12 and others have called off fall football even as the ACC, Big 12 and SEC push ahead amid uncertainty and concern.

Brohm used the anger and frustration about the Big Ten's announcement to motivate him to come up with a solution. He finished the document Thursday morning.

The plan calls for teams to report Jan. 16 for a two-week training camp before progressing to four weeks of practice, with two mandatory off days each week and only two padded practices each week. Eight conference-only games would be played from Feb. 27-April 17, with no bye weeks, before a four- or six-team playoff in May.

Most players would then get a three-month respite from mandatory workouts before pre-camp work begins July 19. Teams would then play a 10-game season from Oct. 2-Dec. 11, with one bye week per team and one padded practice per week. A playoff would be held the first two weeks of January.

Critics might contend college players should not be playing up to 22 games over an 11-month period. Big Ten officials did not immediately respond to an email seeking comment about the plan.

“Can you have spring football and recover enough from a neurological and muscular, skeletal, point of view to then proceed with a full fall season?" NCAA chief medical officer Brian Hainline asked. “Those are active discussions happening right now.”

Brohm's answer: NFL teams play up to 25 games over a five-month period and college football's playoff teams were averaging as many as 1.875 games per month before the COVID-19 pandemic. Plus, Brohm believes, a spring season would give medical teams more time to collect information about vaccines and treatments and potentially avoid the ugly look of empty stadiums.

One potentially significant problem if the ACC, Big 12 and SEC do play this fall — separate playoff formats and split champions. Of course, medical complications could change everything yet again in which case Brohm would welcome those schools to the table.

“This plan would work best if we were all in it together," Brohm said. “That I can’t predict. But I think you can adjust, and I think it can work extremely well if all of college football is on this plan."