Pushed to the limit, Djokovic finds a way to win in Rome 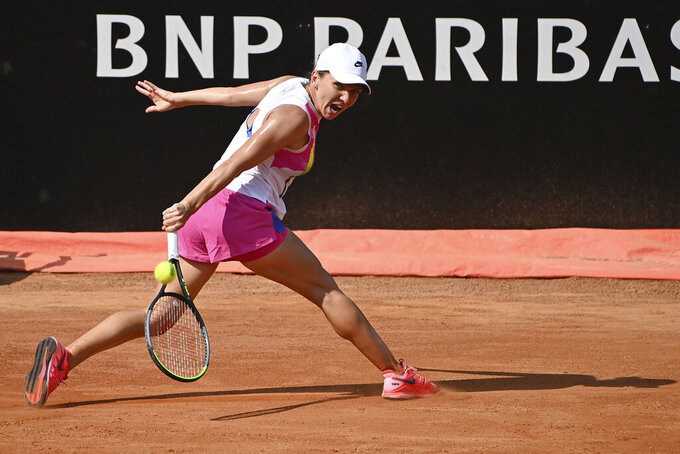 ROME (AP) — Novak Djokovic was being pushed so hard in the first set by Filip Krajinovic that he urgently needed somewhere to sit down and catch his breath.

Since it was 5-5 and not time for a changeover, he plopped down on one of the new boxes installed behind the court for players’ towels — which are there because ball kids are no longer providing towel service amid the coronavirus pandemic.

It would take Djokovic quite a bit more work before he finally closed out the first set in 1 hour, 28 minutes and went on to finish off a 7-6 (7), 6-3 victory for a spot in the Italian Open quarterfinals for the 14th straight year on Friday.

“It was a great battle,” said Djokovic, who is playing his first tournament since being defaulted from the U.S. Open. “Definitely one of the longest sets I’ve ever played. We went toe to toe. It could have gone a different way.”

Nine-time Rome champion Rafael Nadal faced much less resistance in beating Dusan Lajovic 6-1, 6-3 in more pleasant evening conditions. His next opponent will be eighth-seeded Diego Schwartzman, who got past Hubert Hurkacz 3-6, 6-2, 6-4.

It's Nadal's first tournament in seven months after skipping the U.S. Open due to travel concerns amid the pandemic.

Earlier, with the temperature on Campo Centrale soaring to 32 degrees C (90 F), Djokovic said “we both struggled physically in that first set.”

The set was so close that the players won the same number of points — 61 — and Djokovic didn’t close it out until his fifth set point when Krajinovic’s forehand sailed long.

Shadows moved across the court in the second set.

“That allowed us to feel better,” Djokovic said. “But I’m very pleased with this first set. There were some very long rallies. This is what clay tennis is all about.”

Sinner, who beat third-seeded Stefanos Tsitsipas in the previous round, missed an easy overhead smash into the net on Dimitrov’s fifth match point.

“A loss like that hurts. But I’ll try to take the positive aspects out of it,” Sinner said. “That wasn’t the end I wanted.”

In the women's draw, top-seeded Simona Halep improved to 7-0 in tennis’ restart after defeating Dayana Yastremska 7-5, 6-4.

Halep, who is actually on an 11-0 run overall stretching back to February, recovered an early break in the opening set and then overpowered her 29th-ranked opponent.

“It gives me confidence that even in these conditions with a big hitter I could win in two sets,” Halep said.

U.S. Open runner-up Victoria Azarenka advanced when Daria Kasatkina retired injured at 6-6 in the first set after she got her right foot caught on a line and fell. Azarenka next plays Garbine Muguruza, who beat last year's finalist, Johanna Konta, 6-4, 6-1.

The tournament has been played without fans so far because of the pandemic, although Italy's sports minister said on Friday that up to 1,000 spectators will be allowed in to watch the semifinals and finals.

“It comes as a bit of surprise midway through,” Dimitrov said. “But there is a lot of things that we have control of and some things that we just got to go along with.”

The event was rescheduled from its usual slot in May because of the pandemic.

“I would have preferred to have fans from the start," Berrettini said. "But 1,000 people isn’t a small number and they will make themselves heard."