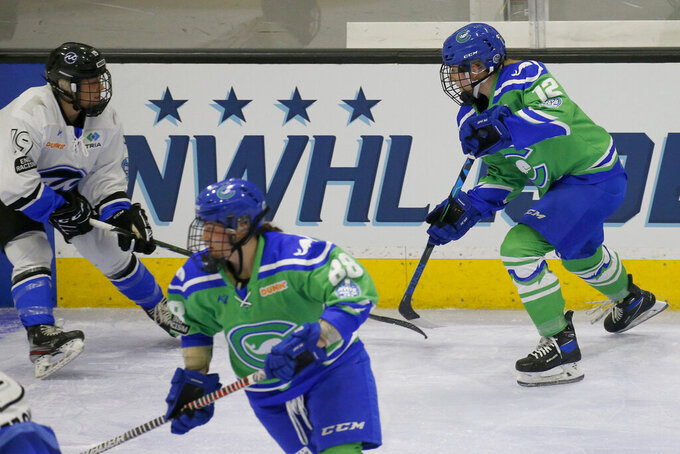 FILE - Connecticut Whale defender Maggie LaGue (12) moves the puck up the ice as Minnesota Whitecaps forward Haley Mack (19) defends during the first period of a semifinal in the NWHL Isobel Cup hockey tournament in Boston, in this Friday, March 26, 2021, file photo. The National Women’s Hockey League made a potentially game-changing decision for the sport in approving to double its salary cap to $300,000 for each of its six teams on Wednesday, April 28, 2021, based on projections it is making strides in achieving financial stability entering its seventh season.(AP Photo/Mary Schwalm, File)

CALGARY, Alberta (AP) — With the women’s world championships on hold, Canada’s top players will face off in a three-team tournament to determine what could be considered an unofficial national champion later this month.

The Professional Women’s Hockey Players’ Association on Thursday announced it will hold a week-long Secret Dream Gap Tour stop in Calgary from May 24-30. The event will feature the PWHPA’s three Canadian-based teams competing in a six-game, round-robin tournament. The top two teams will play for a championship and prize money.

Secret deodorant and the NHL’s Calgary Flames are co-sponsoring the tournament that will serve as the PWHPA’s only Canadian tour stop this season and feature 20-player teams based in Calgary, Montreal and Toronto.

The association’s two U.S.-based hubs in New Hampshire and Minnesota have already held two weekend stops this year. A third stop in St. Louis has been rescheduled for May 16-17 after being postponed in April due to COVID-19 issues.

The PWHPA’s schedule has opened up after the 10-nation world championships in Nova Scotia, Canada, were postponed because of health concerns related to the coronavirus pandemic. The championship tournament, scheduled for May 6-16 will now run from Aug. 20-31 at a yet-to-be determined site.

The PWHPA will follow COVID-19 quarantine and testing protocols established by Hockey Canada for the world junior hockey championship held in Alberta this past winter.

“They believe the protocols, the quote-unquote bubble that’s been put in place, will secure the safety of our group and Albertans,” Hefford told The Canadian Press. “There will be no interaction with the public.”

Border restrictions and Canada’s mandatory self-quarantine requirements for anyone entering the country have prevented the PWHPA’s Canadian-based players from traveling to compete in the United States. The last real games many of them played came in a PWHPA tournament March 6-8, 2020, in Arizona.

Stricter health regulations across Canada also made skating together in groups impossible at times.

“It’s been so challenging,” Hefford said. “We had to try to encourage our players to be patient early on in the season, and even in early 2021 we continued to reiterate we would only host events if we could feel really comfortable about the safety of everyone involved.”

Canada’s Sportsnet will broadcast three games nationally, including the championship, and air the remaining games on its streaming platform, SN NOW.

Hefford thanked PWHPA sponsors for their continued support, and hoped the Calgary event will continue raising the visibility of women’s hockey across Canada at the same time as the NHL playoffs are being held.

The NHL's seven Canadian-based teams were placed in a newly aligned North Division, and had restrictions lifted in allowing them to hold practices and travel within the country.

“It seems like men’s hockey has gone on and we continue to hit these hurdles,” Hefford said. “I hope this is a great opportunity for the women to play, but also for people to see the best of women’s hockey on the ice again.”