QB of the future? RB of the present? Steelers weigh options 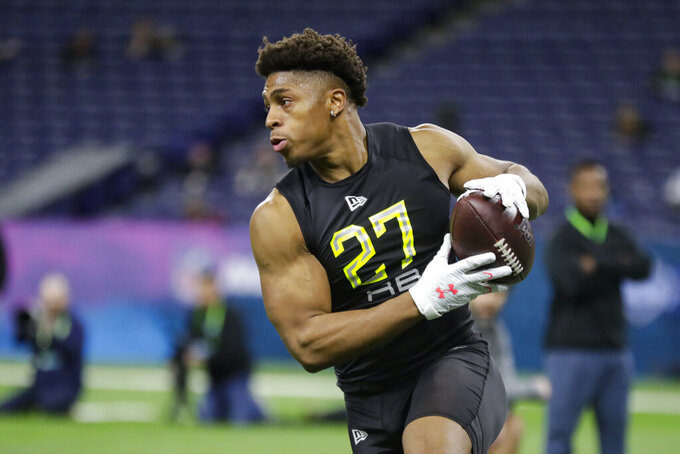 The Steelers made an uncharacteristically aggressive move last September when they sent their top selection in the 2020 draft to Miami for Fitzpatrick, whose arrival turned Pittsburgh's defense into one of the NFL's best. It doesn't matter that the move left the franchise without a first-round pick for the first time in more than a half-century, particularly considering how the COVID-19 pandemic upset the typical evaluation process.

“Under the current circumstances, the uncertainty of a player you might be taking, and not have all of the information you’ve had in the past, I’m a lot more comfortable knowing that we got an All-Pro player with that pick,” Colbert said.

Meaning the Steelers will spend the first night of the draft as spectators unless Colbert finds a compelling reason to come up with a way to crack the top 32. He's not banking on it.

“We’ll never say we won’t trade into any given round or trade out of one,” Colbert said. “I think it’s highly unlikely that we can come up with any type of package to get back in the first round.”

Barring a move, Pittsburgh will have to wait until the middle of the second round to be on the clock. Where Colbert and coach Mike Tomlin decide to go could say a lot about where they view the team heading into 2020.

The Steelers managed an 8-8 season despite losing quarterback Ben Roethlisberger for the year at halftime of Week 2 because of a right elbow injury that required surgery.

Roethlisberger, who turned 38 in March, is on track for a full recovery. Still, neither Mason Rudolph nor Devlin “Duck” Hodges made a compelling case that they're ready to be Roethlisberger's eventual heir.

While Colbert and Tomlin both say they're comfortable with Rudolph entering 2020 as the top backup, they may be tempted to use the 49th overall pick on someone such as Oklahoma quarterback Jalen Hurts or Georgia's Jake Fromm.

Quarterback depth isn't the only area where the Steelers could benefit from a talent upgrade. Running back James Conner is entering a contract year and the fact the Steelers opted not to approach the 2018 Pro Bowler with an extension is telling.

Conner has topped 100 yards rushing just once in his past 15 games and struggled to stay healthy for much of his three years in the league. Colbert is confident Conner can be an impact player in 2020, but admitted it might be time to look around.

Wisconsin star Jonathan Taylor's mileage might be higher than most backs coming out, but that didn't stop the Steelers from drafting Le'Veon Bell — who fit a similar profile — back in 2013.

“It’s our job to make sure we have options and alternatives and competition ready to go, and that’ll be what we’re working on,” Colbert said.

Devin Bush was just as productive as advertised when the inside linebacker finished with 109 tackles, two picks and a sack as a rookie. Bush and veteran Vince Williams are entrenched as the starters, but the decision to release Mark Barron and let Tyler Matakevich walk in free agency leaves the group behind Bush and Williams thin. Very thin.

The offensive line that served as the linchpin during the “Killer Bs" heyday of the mid-2010s is starting to show its age.

Ramon Foster retired in March and left tackle Alejandro Villanueva, center Maurkice Pouncey and right guard David DeCastro are all 30 or older. The Steelers chose to tender a contract to long-term project Zach Banner, and Chukwuma Okorafor remains an intriguing prospect. But, with the rosters expanding this season, finding more raw material to work with is a priority.

Pittsburgh has used one of its first three picks on a wide receiver in each of the past three drafts. There's a chance the Steelers could make it 4 for 4. JuJu Smith-Schuster's numbers took a serious dive in 2019 thanks in large part to health issues, Roethlisberger's extended absence and Antonio Brown's departure.

James Washington made small strides in his second year and Diontae Johnson flashed good hands as a rookie. Still, there's little behind them and adding a field stretcher is a must after opponents limited the team to just 10.2 yards per reception, the franchise's lowest since 1998.