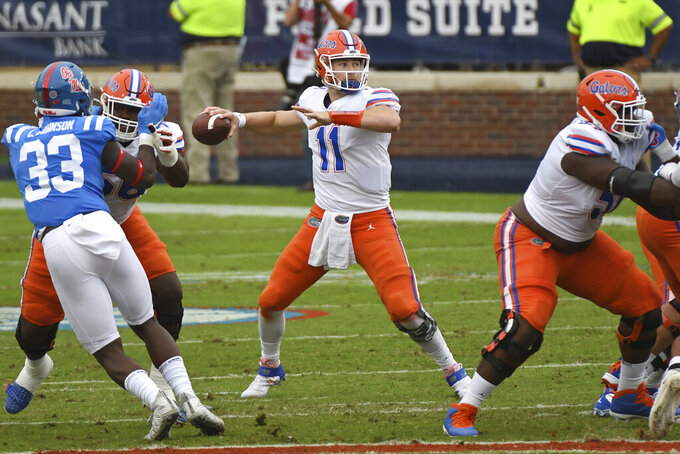 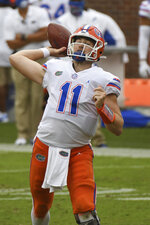 Southeastern Conference fans expecting defenses to be ahead of offenses could not have been prepared for the big passing games from Mississippi State's K.J. Costello and Florida's Kyle Trask to open the season.

Trask and Costello were the league’s biggest opening week surprises as they showed they are quarterbacks to be watched in 2020.

Trask completed 30 of 42 passes for 416 yards and six touchdowns in a 51-35 win at Mississippi. Trask, opening his first full season as a starter, set a high measuring stick for No. 3 Florida against South Carolina this week.

The biggest shocker came in Baton Rouge, when Costello, a Stanford transfer, passed for an SEC record 623 yards and five touchdowns as the Bulldogs beat No. 6 LSU 44-34.

In his first game with Mississippi State, Costello blew past the conference’s passing record that stood for 27 years. Georgia’s Eric Zeier threw for 544 yards against Southern Mississippi in 1993.

Costello and No. 16 Mississippi State will test the “Air Raid” attack against Arkansas this week.

Some may have seen the SEC’s 2019 class of quarterbacks as an outlier. After all, it was the first year the league had two quarterbacks selected in the first round of the draft.

Florida coach Dan Mullen said the big offense in many SEC games was the result of the coronavirus pandemic which wiped out spring practice for most teams.

“Normally at the beginning of the season, everybody is like, ‘OK the defenses are great and the offenses are going to take a little time to catch up,’” Mullen said Monday. “I think now that you have eliminated spring ball, when you eliminate the amount of tackling that you have done at this time, you expand this long training camp with the limitations that we had in it. I think it’s an advantage for the offense really, so this is what you are seeing.”

The biggest advantage came through the air.

While 11 SEC quarterbacks threw for at least 200 yards, there was only one 100-yard rusher in the league. Freshman Isaiah Spiller ran for 117 yards as No. 13 Texas A&M beat Vanderbilt.

Expect bigger games as running backs solidify lead roles. Georgia's Zamir White ran for 71 yards at Arkansas as the Bulldogs' replacement for D'Andre Swift, and White will be a key player as No. 4 Georgia plays No. 7 Auburn on Saturday.

Costello and Trask were not the league's only first-week surprises.

Graduate transfer Collin Hill made an instant impact at quarterback for South Carolina against what’s expected to be a strong defense for Tennessee.

The ex-Colorado State passer coming off his third ACL injury rallied the Gamecocks after the Vols took a 21-7 lead early in the third quarter with three long scoring drives.

No. 21 Tennessee held on for a 31-27 victory, but Hill passed for 290 yards, threw a touchdown and ran for another. It was a promising debut for Hill and provided hope for a South Carolina offense that ranked 12th in the SEC last season.

Hill and the Gamecocks play No. 3 Florida on Saturday.

The pandemic cut into the ability to have special teams practice. That showed as Tennessee had to switch long snappers after a bad snap on a punt early in their win at South Carolina and also missed a field goal.

Tennessee had to cancel a practice in August and turned a planned scrimmage into a practice because the Vols were missing players.

“I don’t think it’s adding a period or two, it’s about having players available,” said coach Jeremy Pruitt. “Your first four practices, you have no specialists there and then maybe 10 out of the next 14 you have over 50 players that are absent. With no spring ball, it’s not like there is any carryover.”

DaQuan Newkirk took advantage of the opportunity with a career game. Newkirk had six tackles, four solo, with two for a loss and one sack. He had five tackles last season and 12 total in 20 games since transferring from junior college.

“I think I played pretty well, honestly," Newkirk said. "It kind of surprised me. On another note, I’m healthy so it’s like a big difference this year. ... It’s going to be a different year for me.”