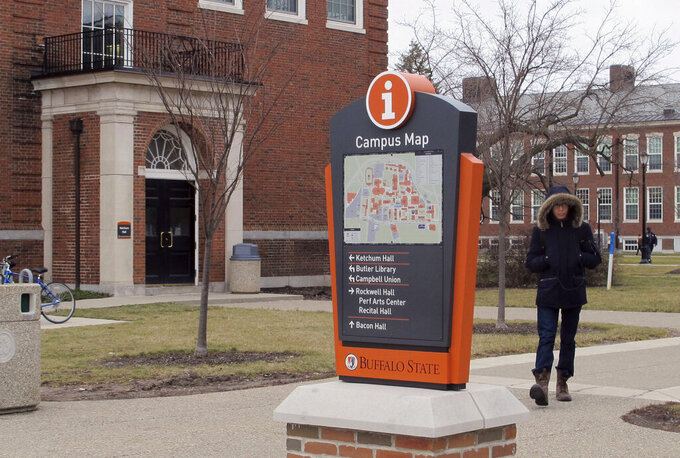 FILE - In this Jan. 27, 2017, file photo, a student goes about his day on the Buffalo State College campus in Buffalo, N.Y. Students attending college at one of New York's public universities in the spring of 2021 will have to quarantine at home for a week first and be tested for COVID-19 when they arrive on campus, officials announced Sunday, Nov. 8, 2020. (AP Photo/Carolyn Thompson, File)

Students attending college at one of New York's public universities in the spring will have to quarantine at home for a week first and be tested for COVID-19, officials announced Sunday.

The spring semester will start later than usual, on Feb. 1 instead of Jan. 22, and there will be no spring break, which was canceled to prevent the spread of the coronavirus through the end of the academic year.

“The state guidance won’t allow for big gatherings right now, so unless something dramatically changes, we don’t see that,” State University of New York Chancellor Jim Malatras said in an interview. He encouraged campuses to take time they didn't have last spring to be more creative with the next round of ceremonies.

SUNY issued the spring semester guidance as students at its 64 colleges and universities statewide made plans to leave for Thanksgiving break later this month and finish the rest of the fall semester remotely.

Before they return, after two months away, students will first have to quarantine for seven days. They'll also have to either show a recent negative test or get a test when they return to campus.

After that, the regular surveillance testing that Malatras said has allowed campuses to manage the virus this fall will continue. SUNY can process up to 200,000 tests a week using a $15 FDA-approved saliva test developed by SUNY Upstate Medical University, he said.

“The testing has been the thing that has really been a game changer for us,” said Malatras, who was named SUNY chancellor in August.

Since August, SUNY has conducted more than 371,700 COVID-19 tests with an overall positivity rate of 0.48 percent, officials said Sunday.

Several campuses have paused in-person learning after detecting outbreaks. SUNY Oneonta sent students home for the remainder of the semester in early September after off-campus parties led to a spike. SUNY Cortland also is all remote through the semester's end after closing classrooms in early October. SUNY Oswego and Binghamton University have seen temporary stops in in-person learning.

The spring semester guidance, developed with input from public health experts, faculty, students and unions, combines new protocols with some already in place, like mandatory mask-wearing even while social distancing, the chancellor said.

“The students really want to be back," he said. "What I want to do is make sure that we’re representing what they want as well in the safest environment we can,” he said.

New York state is scrambling to contain a resurgence of the coronavirus that in March cut short the last spring semester for colleges nationwide. Hospitalization rates have been slowly climbing in New York and the state on Wednesday began requiring many travelers to get a coronavirus test before and after they arrive if they want to avoid a 14-day quarantine.

SUNY is closely watching developments, Malatras said, and will change its spring plans if necessary.

Many of SUNY's more than 400,000 students have continued to attend classes remotely even after the campuses reopened in the fall with classrooms, dining halls and residential buildings reconfigured to allow for social distancing.

Under New York state guidance, colleges that record either 100 active cases or an on-campus positivity rate above 5% within a two-week window must pause in-person learning for two weeks.