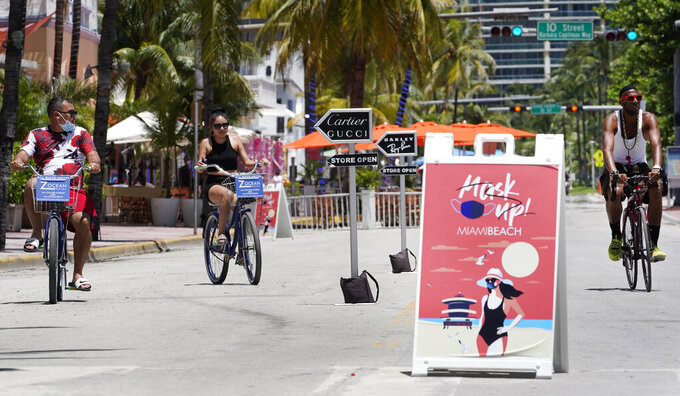 FILE - In this Aug. 11, 2020, file photo, bike riders ride past a "Mask Up Miami Beach," sign, in Miami Beach. As states around the country require visitors from areas with high rates of coronavirus infections to quarantine upon arrival, children taking end-of-summer vacations to hot spots are facing the possibility of being forced to skip the start of in-person learning at their schools. (AP Photo/Wilfredo Lee, File)

Shannon Silver had planned to take her family on a trip from her home in Connecticut to visit relatives in Ohio just before the start of the school year for her two children.

But she and her husband reversed course when people traveling from Ohio were added to a list of those who must quarantine for 14 days upon entering Connecticut. That requirement might have meant her 10-year-old son would miss the first day of sixth grade at St. Matthew School in Bristol.

“We weren't going to do that, especially at the beginning of the school year,” Silver said. “Plus, he really didn't want to miss the last two weeks of summer by having to quarantine.”

The family instead went to see other relatives in Colorado, which wasn’t on the list.

As states around the country require visitors from areas with high rates of coronavirus infections to quarantine upon arrival, children taking end-of-summer vacations to hot spots are facing the possibility of being forced to skip the start of in-person learning at their schools.

More than a dozen states have such travel advisories, including many in the Northeast along with Alaska, Kentucky and Ohio.

More than 30 states are on the list issued by Connecticut, New York and New Jersey in an attempt to prevent another surge of COVID-19 in the region, which was among the hardest hit early in the pandemic. As schools in the Northeast prepare to open early next month, officials are urging parents to be mindful of that guidance while planning any Labor Day getaways.

In Connecticut, where infection numbers are among the lowest in the country, more than half of schools are planning to open for in-person learning. Gov. Ned Lamont made it clear this month that neither students nor teachers would be exempt from quarantine if they visit a hot spot.

“Don’t go to South Florida; don’t go to Phoenix, Arizona, and skip El Paso, Texas, and I would stay away from Southern California for a while too,” said Lamont, a Democrat. “I would stay close to home. I think there are some amazing places you can visit here and do it a lot safer.”

Bill Smith, a high school teacher at Southern Regional High School in Ocean County, New Jersey, said he canceled a research trip that was planned as part of his graduate degree from the University of Edinburgh in Scotland.

“This is the first summer in years that I have not traveled outside of the state,” Smith said. “I have been more than happy to follow any and all guidelines that help protect the health and safety of those around me.”

Pat Toben-Cropper, of Herndon, Virginia, is planning to drive her daughter, Kylie Cropper, back to college this month at the Institute of Art and Design at New England College in Manchester, New Hampshire. She said because of the travel advisories in the Northeast, she was unable to get a hotel reservation north of Pennsylvania.

“It became this logistical nightmare,” she said.

But enforcing the rules can be challenging. In New Jersey, Democratic Gov. Phil Murphy said recently he can’t bar people from traveling and hoped they would heed the quarantine advice. New York has been stopping some out-of-state travelers at checkpoints to ensure they are abiding by the quarantine — a move that has come under criticism.

Some school districts, like Willingboro, have reminded families to quarantine if they're returning from states listed on the advisory. Others, like the state's largest in Newark, don't directly mention the advisory in their return-to-school plans.

Nancy Deering, the ombudsman for Newark's public schools, said the plan is “fluid” and guidance could be added at some point. She pointed to the fact that teachers and staff must produce a negative test and undergo a symptom screening to return to school in person.

But schools will simply have to trust that students who have traveled to hot spots are coming clean and following the rules.

Walter Willett, the superintendent of schools in Tolland, Connecticut, said he fears that students might lie, so they can attend in-person classes. His schools are making sure that every class has an online learning option and will try to ensure kids don’t miss a beat if they need to quarantine.

"We have to be vigilant in protecting each other and, please, if you are in one of these situations, know that you will be supported. It’s important for the families to know that we have remote learning, online learning for them and that it’s not a permanent thing,” Willett said.

Many of the travel restrictions in place are moving targets, complicating planning for families. Last week, for instance, a handful of states were removed — including nearby Rhode Island and the Silvers’ destination of Ohio — and a few more added to the tristate area’s list.

Erin McCall, of Avon, Connecticut, said she also was going to postpone a trip to Ohio, before it was removed from the list. She said she now plans to keep her son home this fall anyway because the safety line always seems to be moving.

“Everything is put on hold, vacation, going back to school, because everything is changing so rapidly,” she said. “If I had more confidence in the school system and its ability to sterilize everything and make everything safe, then maybe I’d change my plans. But I don’t.”

This story has been corrected to show that the name of one of the writers is Mike Catalini, not Mike Catlaini.