To the quarters: USA routs Czech Republic, 119-84 in Tokyo 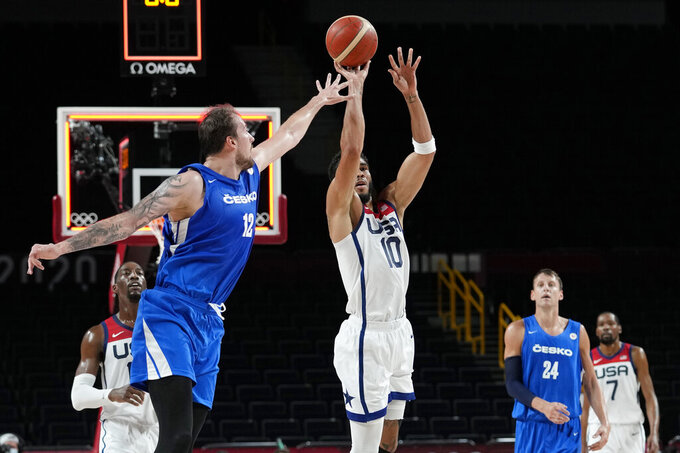 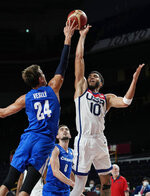 SAITAMA, Japan (AP) — The U.S. lost its first two exhibition games of the summer in Las Vegas, dropped its opening game at these Olympics and had a difficult time shaking free of the Czech Republic in their group-play finale.

None of that matters now.

The Americans are headed to the quarterfinals at the Tokyo Games — with a shot of being good as gold once again. Jayson Tatum scored 27 points, Kevin Durant added 23 and set a pair of USA Basketball men's Olympic records, and the U.S. defeated the Czechs 119-84 on Saturday to clinch a berth in the knockout stage.

“I think our guys really focused well and did a good job in gaining ground, day by day, practice by practice," U.S. coach Gregg Popovich said. “Hopefully we'll continue that moving forward. We have to if we want to be successful."

Zach LaVine scored 13 points, Jrue Holiday had 11 and JaVale McGee finished with 10 points for the U.S. The Americans shot 7 for 20 in the first quarter — then made 33 of 44 shots over the next 26 minutes, including a staggering 21-for-25 start to the second half.

The U.S. (2-1) finished second behind France in Group A, but will join the French, Australia and the winner of Sunday’s game between Slovenia and Spain as a top-four seed for Tuesday’s quarterfinals based on FIBA's tiebreaker system that includes point differential.

Those quarterfinal matchups will be decided in a draw on Sunday night, but the U.S. has now assured itself of not having to face any of the three group winners until at least the semifinals.

Blake Schilb scored 17 for the Czech Republic (1-2), which led by 10 early and was still within 60-54 midway through the third quarter.

In a flash, the Czech hope of a stunner ended there.

“I think the first half, we played amazing. ... Second half, we ran out of gas," Czech Republic coach Ronen Ginzburg said.

Durant — who passed Carmelo Anthony as both the U.S. Olympic men’s all-time points and all-time field goals leader during the game — hit a 3-pointer to end the third quarter, capping a 22-6 run that put the Americans up by 22 going into the final quarter.

The outcome was not in doubt again, and Durant said the scoring record was “special" to him on a night where the Americans engineered a 48-point turnaround from being down 10 to leading by as many as 38.

“You just think about all the players that played in this program," Durant said. “Pretty cool to be amongst names like that. Carmelo is a guy that I played on two Olympic teams with, I've seen his approach to these games and I've tried to steal some of his techniques."

Ondrej Balvin scored 15, Jan Vesely had 13 and Tomas Satoransky added 12 points for the Czechs, who were eliminated. The U.S., France, Australia, Spain, Slovenia, Germany, Italy and the winner of Sunday's game between Argentina and host Japan will be playing on Tuesday, their medal hopes still intact.

Once in the quarters, it is win-or-else time. And the quarterfinals were the round where it all went awry for the U.S. at the last major international competition, the Basketball World Cup in China two years ago. The Americans lost to France, ending all hope of a medal and eventually finished seventh.

Here, it's all about the medal — that is, one medal, and one medal only.

“We don't plan on getting bronze or silver," U.S. reserve Keldon Johnson said.

This U.S. team — which lost to France to open the Olympics before posting a 54-point win over Iran and a 35-point win on Saturday — hasn’t looked much like that World Cup team did two years ago, though it needed some time to find its best stride against the Czechs.

The Czechs led by as many as 10 in the first quarter, shooting 65% to the Americans’ 35% in the opening 10 minutes. With a roster featuring just one current NBA player — Satoransky — they did not look the least bit intimidated by the U.S.

“Congratulations to the USA," said Satoransky, who revealed he's been playing in the Olympics with a groin injury that he said will need time to heal. “Unfortunately, we couldn't continue with the same type of basketball after the first half. ... Obviously, they're the best team in the world."

Durant gave the U.S. its first lead midway through the second quarter, a 3-pointer putting the Americans up 34-33. The lead eventually got to as much as seven, before the U.S. settled for a 47-43 edge at halftime.

And that left some in the crowd — hundreds of people were in the lower bowl of the arena, even though no tickets were being sold — more than a bit anxious. Among them: Members of the German team; their hopes of qualifying as one of the top third-place teams hinged on the outcome of this game.

By the start of the fourth, the Germans could relax. So could the Americans, who are “extremely" confident heading into the quarterfinals, McGee said. After some time together, some adversity together, the world's No. 1-ranked team looks like the one to catch yet again.