Off the radar again: Ja Morant has same to-do list this year 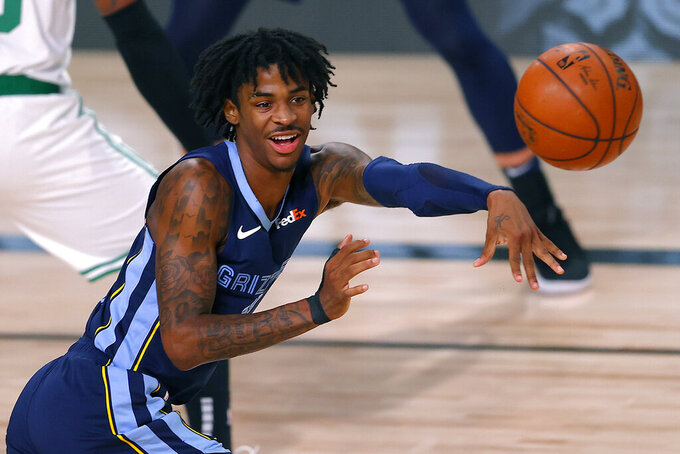 FILE - In this Aug. 11, 2020, file photo, Memphis Grizzlies' Ja Morant passes the ball during the second half of an NBA basketball game against the Boston Celtics in Lake Buena Vista, Fla. Morant and the Grizzlies once again seem to be an afterthought heading into the NBA season. Morant says proving everyone wrong again about him and his teammates is his top goal. (AP Photo/Mike Ehrmann, Pool, File)

Ja Morant and the Memphis Grizzlies once again seem to be an afterthought heading into the NBA season.

There isn’t much buzz about last year’s NBA Rookie of the Year. At least there’s not the attention the retooled Lakers, Kevin Durant’s return to the court or Zion Williamson’s sophomore campaign are getting.

Morant and this teammates were a surprise last season and he plans to remove any doubt this year.

“Attacking the season and proving everybody wrong is my number one goal,” Morant said.

Memphis' young star and Grizzlies coach Taylor Jenkins are in complete agreement on what Mortant needs to work on in his second season.

“Everything,” Morant said. “I feel like it's that simple.”

Asked what he wants Morant to improve on, Jenkins said, “My simple answer would be everything."

Expectations are very high in Memphis thanks to the point guard's impressive rookie debut.

Not only was Morant a nearly unanimous pick as NBA Rookie of the Year, he was the lone unanimous pick on the league's All-Rookie first team with teammate Brandon Clarke, one of the rising stars for All-Star Weekend in Chicago and a three-time pick as the Western Conference's rookie of the month.

Morant led the Grizzlies with 17.8 points per game while starting 67 games. He also averaged 7.3 assists and 3.9 rebounds while shooting 47.7%. He had a pair of triple-doubles and 15 double-doubles.

But Memphis lost the play-in game Aug. 15 to Portland after going 2-6 in the seeding games to miss the playoffs. Morant took that personally even if the Grizzlies didn't have Justice Winslow in the bubble and lost Jaren Jackson Jr. to a knee injury after three games.

“I felt like I could have been better in a lot of places," Morant said. “Obviously, I didn’t get the job done. So that’s a big takeaway.”

Jenkins believes Morant is motivated to improve every facet of his game, on and off the court.

“How can he be a better decision maker, shooter, leader on the offensive end? How can he be the leader of our defensive unit? And being the first line of attack, how can he a better pick-and-roll defender, activity, rebounder to start our break,” Jenkins said. “It’s holistic. I think he embraces that challenge. That’s how he’s built."

The head coach, going into his second season as well, said he talked with Morant a lot about being a leader, the need to work on his body with diet and nutrition. Since leaving the bubble, the 6-foot-2 guard has added another five pounds to his listed 175 pounds.

Morant also has worked on his shot and said his percentages have been improving with each workout since last season ended. He shot nearly 48% from the floor as a rookie, but only 33.5% from 3-point range.

The Grizzlies want Morant taking a few more 3s per game, though Jenkins made clear they are not trying to keep Morant away from a mid-range jumper. Memphis coaches want Morant catching and shooting more 3s after the guard was a 42% shooter in those situations rather than off the dribble, where he was in the low 30s.

They also want Morant to read and react quicker when the guard either shoots a 3 or goes to the basket.

"He’s got an elite floater, and we want him to excel in that and become an elite finisher as well ...,” Jenkins said. “He’s got the great ability with his sixth sense to kind of read situations sometimes before they even have happen.”

Morant already has shown he can be among the NBA's best at finishing games.

“Ja has gone above and beyond this summer working on his shot ...,” Jenkins said. "We know he’s going to take big steps this year. The numbers will be the numbers. He’s just making the right decisions, trusting the work behind it. They go hand in hand, and we’re going to get the right numbers at the end of day.”

Morant, who turned 21 in August, is working on his off-court decision-making. He was seen on video attending a party at a Memphis nightclub Thanksgiving weekend without a mask during a spike in the coronavirus pandemic.

He said he should have worn a mask throughout the party — or maybe not have gone — noting he's still learning all the protocols the NBA expects of players this season.

Morant still carries a big chip on his shoulder, and is working to prove it would be mistake to overlook the Grizzlies

He said if he continues putting in the work, "I might be able to do that.”