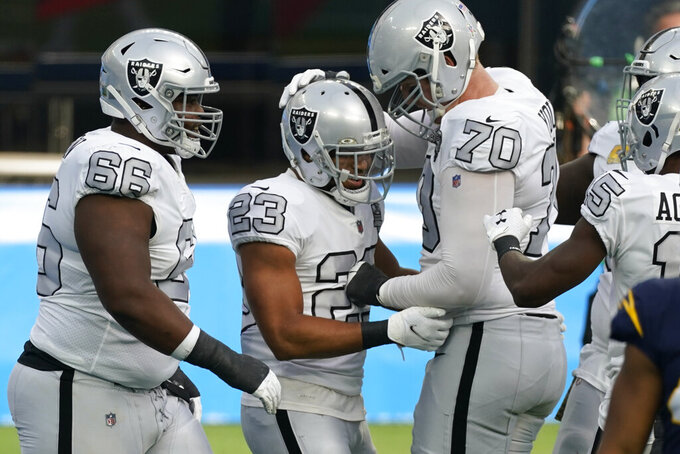 When the Las Vegas Raiders set out to build their roster for 2020, a priority was placed on beefing up the offensive line.

The Raiders invested more money into the line this season than any other team, with a league-high nearly $54 million dedicated to the salary cap at the position.

The only problem is the Raiders have only been able to see the starting group together for three plays all season because of a run of injuries and illnesses that has sidelined tackles Trent Brown and Kolton Miller, as well as guard Richie Incognito at times.

“At the end of the day, nobody cares,” quarterback Derek Carr said Wednesday. “It doesn’t matter if you are on your fourth tackle. It doesn’t matter if we’re switching guys from tackle to guard, left to right and right to left. Nobody cares because at the end of the day we’re going to play the game. Did you win, or did you lose? And I guess our whole team has taken that mindset and that approach.”

The Raiders have managed to survive the juggling act on the offensive line thanks in large part to the steady leadership from the group’s two constants, center Rodney Hudson and right guard Gabe Jackson, impressive versatility from backup Denzelle Good, and a unit that has shown the ability to adapt under line coach Tom Cable.

The Raiders have started nine players on the line this season, including three at right tackle and three at left guard.

“I know Coach Cable, he does a great job with getting everybody prepared,” Jackson said. “It doesn’t matter who goes in. We all try to be one heartbeat and send the same message. That’s work hard and compete.”

The Raiders rank ninth in the league in rushing (131.3 yards per game) and are tied for the 11th-fewest sacks allowed with 14. The line has really imposed its will the past two games when the Raiders have run for 369 yards and an average of 5.2 per carry, ranking in the top five in both categories.

Both those performances came in trying circumstances. Two weeks ago during a wintery storm in Cleveland, the Raiders lost Brown the morning of the game after an IV mishap sent him to the hospital. That forced Brandon Parker to be active and he ended up playing most of the game at right tackle after Sam Young left in the first half with a knee injury.

The Raiders were already without their starter at left guard since Incognito hurt his Achilles tendon early in Week 2. That forced Good to step in there after he earlier had played right tackle with Brown and Young hurt.

The problems only got worse last week against the Chargers after Brown went back on the COVID-19 list and Miller missed the first game of his career with an ankle injury, forcing Parker to play left tackle.

That all comes after the Raiders were forced to play a game against Tampa Bay last month after not having the entire starting offensive line at practice during the week when Brown tested positive for the coronavirus and four teammates missed three practices because of “high risk” close contacts.

Through it all, Hudson has anchored the group at center with big contributions from Jackson and Good.

“He’s the leader of the group, no doubt,” coach Jon Gruden said of Hudson. “He makes the guys next to him better. He holds the guys to a high standard the way we meet, the way we practice and the way we compete. It all starts with Rodney, he’s having another great season.

"It’s good to see a healthy Gabe Jackson and Denzelle Good has really stepped up. Our interior three has played excellent football and we’re hoping that our tackles can return healthy together someday soon, but in the meantime, you have to tip your hat Brandon Parker. He’s played right tackle and left tackle in consecutive weeks and Sam Young has given us some critical snaps.”

The Raiders don’t know when they’ll get the entire line healthy, which it hasn’t been since Brown left the opener after hurting his calf on the first drive.

He’s not expected to return any time soon from the COVID-19 list and Incognito hasn’t even started practicing yet.

“It’s been tough,” Gruden said. “We’ve had a lot of adversity. ... It’s disappointing, but it’s an opportunity to keep digging, keep grinding, keep developing and finding ways to win.”