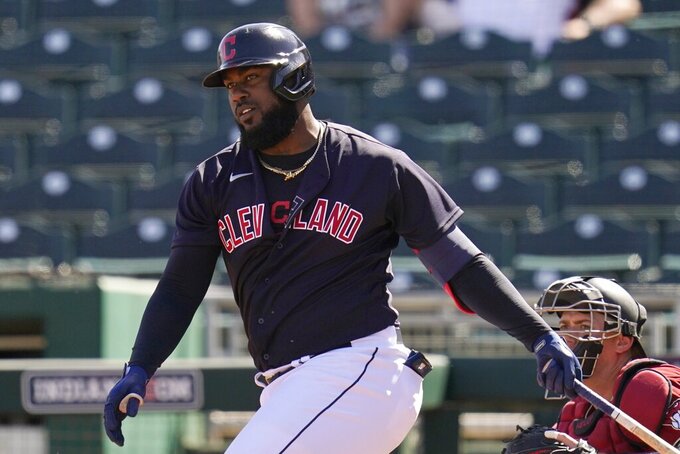 Cleveland Indians designated hitter Franmil Reyes follows through on a swing against the Arizona Diamondbacks during the second inning of a spring training baseball game Wednesday, March 3, 2021, in Goodyear, Ariz. Indians star third baseman José Ramírez and slugger Franmil Reyes have rejoined the team after being banned for breaking COVID-19 protocols. The players tested negative for the virus Tuesday, March 9, 2021, and were back at the team's facility in Goodyear, Arizona.(AP Photo/Ross D. Franklin) 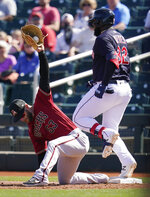 The players tested negative for the coronavirus and were back at the team's facility in Goodyear, Arizona. They are scheduled to play in Wednesday's exhibition against the Los Angeles Angels.

Ramírez and Reyes had been isolated at their temporary spring training homes since Saturday after they went out to dinner indoors, which violated virus guidelines set by Major League Baseball and the players' union.

Indians manager Terry Francona said Ramírez and Reyes addressed the team after returning and spoke “in a very thoughtful and sincere way.”

Francona said any team discipline against the players would stay internal.

“The idea is never to embarrass anybody, and I explained that to José and Franmil,” he said. “I’m really comfortable where we are right now. And like anything that doesn’t go perfect, where you go from there is what’s really meaningful. I think we’re gonna be OK.”

It's the second time Reyes has broken the rules. Last year, he attended a July Fourth party without wearing a mask, a violation the team learned of from a social media post.

On Friday, Reyes went to get a haircut after the Indians played the Chicago Cubs in an exhibition game in Mesa, Arizona, and then he and Ramírez joined others for dinner.

Francona said some of the COVID-19 guidelines have been fluid this spring.

“We have tried to make sure we keep in the loop every morning,” he said. "Technically on March 1, the guys were going to be allowed to dine at restaurants and then the night before, we got a memo saying no, hold off on that.

“And then I think it was about three days later that they got outdoor dining — it’s kind of a moving target at times. So we’ve really tried to keep players in the loop.”

“It was an honest mistake, whatever happened,” said Johnson, who homered twice on Tuesday. "A lot of our guys wanted them back. Stick to the same guidelines. We trust that they won’t do that again. They’re all good guys.”

The Indians had a similar situation last season when right-handers Zach Plesac and Mike Clevinger broke team rules by going to dinner when the team was in Chicago.

The team put both players on the restricted list and sent them to the Indians' alternate training site. Clevinger was traded a few weeks later to San Diego.

Francona, who received his first COVID-19 vaccine last week, said although restrictions could be easing in some states, it's imperative for the players to follow MLB's procedures closely.

“We just tell them what the league and what the players' association has come up with and just try to be honest with them,” he said. "Whether you agree or disagree, it’s still, if you don’t abide by it, it could affect our team.

“And that’s the biggest thing you try to explain to them. If we follow the rules, one, we’re going to put the majority of people in a much safer position, but also, we’re not going to have players miss time, which is also good.”

Ramírez is Cleveland's best all-around player. He finished second in AL MVP voting last season after batting .292 with 17 homers and 46 RBIs in 58 games.

Reyes will be the Indians' full-time designated hitter this season. He hit nine homers with 34 RBIs last season. In 2019, he hit 37 homers combined for Cleveland and San Diego.