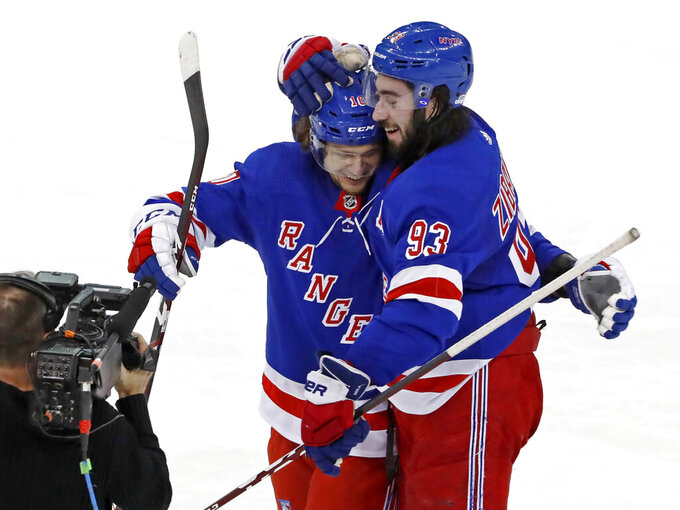 FILE - In this March 5, 2020, file photo, New York Rangers left wing Artemi Panarin and center Mika Zibanejad (93) celebrate after Zibanejad scored in overtime of the team's NHL hockey game against the Washington Capitals in New York. The Carolina Hurricanes are determined to make a second straight deep run in the Stanley Cup playoffs. That can only happen if they do something they have rarely done over the past decade: defeat the Rangers. (AP Photo/Kathy Willens, File)

The New York Rangers liked the way they were playing before the coronavirus pandemic interrupted last season. After a quick exit in the postseason when play resumed, they're now focused on building on the strides they made.

“You could see the progress, especially on the defensive side of the puck,” forward Chris Kreider said on a Zoom call with reporters. “We know we’ve got the skill, we know we bring a pretty dynamic offensive game.”

Led by Artemi Panarin and Mika Zibanejad, the Rangers got into a groove after the All-Star Game with a 12-2-1 run to climb into the playoff race. Panarin finished with career bests in goals (32), assists (63) and power-play points (24) in his first season in New York, and Zibanejad had career highs with 41 goals and 75 points.

However, the Rangers were unable to rediscover their winning ways, getting swept in three games by Carolina in the qualifying round of the playoffs.

“If we’re not going to have success, it can’t be for lack of conditioning or lack of effort,” coach David Quinn said. “I know our guys understand that. Certainly we’ve talked about it an awful lot since we got out of the bubble last year. ... We don’t want to paint the brush with three games last year, but we can’t ignore it."

The Rangers' disappointment was soothed when they won the No. 1 pick in the draft lottery and selected touted forward Alexis Lafreniere. The 19-year-old joins a team looking to continue developing into a title contender.

Quinn believes the Rangers are in a better position now than at the start of last season.

“There’s a little bit more stability now,” he said. “There isn’t the big turnover and the question marks we had last year, so I really believe (the key is) getting off to a good start. ... You can’t dig yourself a hole. And avoid those losing streaks. It’s going to be pivotal this year for everybody.”

However, it won’t be easy in a tough East Division with a compact 56-game, division-only schedule. The Rangers open the season on Jan. 14 with the first of two games in three days against the Islanders, both at Madison Square Garden.

Henrik Lundqvist is gone after spending 15 seasons in New York, leaving as the franchise leader in wins (446), shutouts (64) and postseason wins (61). Igor Shesterkin figures to be the starter after going 10-2-0 with a 2.52 goals-against average following his NHL debut last Jan. 6. Alexandar Georgiev, re-signed to a two-year, $4.85 million deal, will be the backup after going 17-14-0 with a 3.04 GAA. Keith Kinkaid also could get some playing time.

In addition to Lundqvist, the Rangers are without two of last season's alternate captains — forward Jesper Fast and defenseman Marc Staal. The Rangers haven't had a captain since trading Ryan McDonagh at the deadline in February 2018.

Quinn was noncommittal on whether he would appoint one.

“There are candidates we feel that we have here on the team," he said, "but right now, we’re just going to continue to sit where we’re at and at the right time name a captain.”

Zibanejad and Kinkaid missed the start of training camp, with Quinn saying they were considered day to day. Zibanejad set his career highs last season despite playing in only 57 of the team's 70 games.

Fast's departure leaves the Rangers with an opening on right wing that will likely be filled by a center (Brett Howden) or by moving someone from the left side (Phillip Di Giuseppe).

The Rangers had one of the younger teams in the NHL last season, and the loss of three veterans cements their place in that echelon again. Lafreniere joins Kaapo Kakko, the second overall pick in the 2019 draft, and Filip Chytil, a first-round pick in 2017, as potential cornerstones of the team's future up front. Staal's absence also presents opportunities for newcomer Anthony Bitetto and possibly youngsters such as Ryan Lindgren and K'Andre Miller.

The compact schedule has the Rangers playing the same opponent in back-to-back games plenty of times — including four straight against New Jersey between April 13-18. The Rangers don’t play more than four straight at home. However, in a stretch of seven of eight at home, the lone road game is at New Jersey on Feb. 6. The Rangers won’t be leaving the New York area from April 6-May 5, with 10 home games and road contests against the Islanders (four) and Devils (two) mixed in.