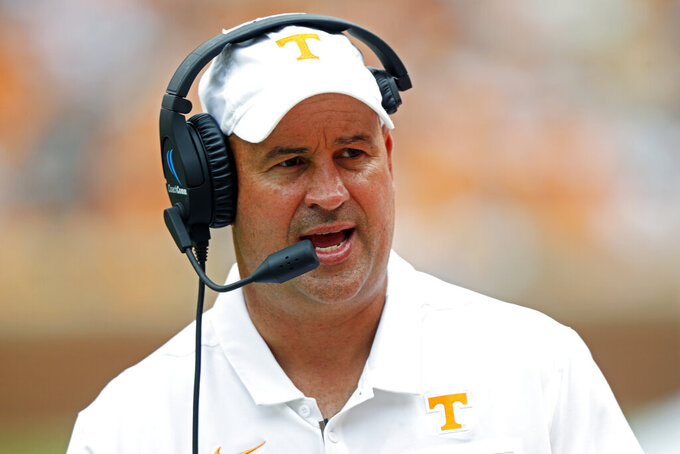 FILE - In this Sept. 14, 2019, file photo, Tennessee head coach Jeremy Pruitt yells to his players during an NCAA college football game against Chattanooga in Knoxville, Tenn. Pruitt said he canceled Friday's practice for No. 25 Tennessee due to a "few more positive" test results and Saturday night's practice also could be canceled depending on the results after everyone in the program was tested Friday morning. (AP Photo/Wade Payne, File)

Positive tests for COVID-19 has forced a pair of ranked Southeastern Conference teams to cancel at least a practice or two as the league announced guidelines for game day covering everything from who will be allowed on the field to press boxes.

Coach Jeremy Pruitt said he canceled Friday's practice for No. 25 Tennessee due to a “few more positive” test results and Saturday night's practice also could be canceled depending on the results after everyone in the program was tested Friday morning.

No. 11 Auburn has canceled its last two practices because of positive test results this week, said a person with knowledge of the situation. How many players, coaches or others tested positive remained unclear. The person spoke to The Associated Press on condition of anonymity because they weren’t authorized to discuss details.

Pruitt said it was his decision to cancel Friday's practice. Tennessee has had good testing results with the exception of when the Volunteers returned after eight days off for the Fourth of July holiday. Then results returned more positive tests, so Pruitt said he shut down practice.

“We retested everybody again this morning to see where we’re at," Pruitt said. ”Our No. 1 priority here is to be able to protect everybody associated with our program, and that’s what we’re going to continue to do. As we get the results back, we’ll see exactly where we’re at and we’ll start practice up accordingly.”

Auburn coach Gus Malzahn is scheduled to speak to reporters Saturday. Auburn spokesman Kirk Sampson would only confirm that the Tigers hadn’t practiced Wednesday or Thursday as scheduled.

Malzahn had previously said the Tigers had gone two straight weeks without a positive after a rash of positives a month before. He said Auburn still had four players going through protocols when the team began practice on Aug. 17.

“We’re going to be very transparent,” Malzahn said on Aug. 22. “We’ll keep y’all updated from week to week as we go, and we hope the other programs do the same thing.”

The Tigers are scheduled to open the season against Kentucky while Tennessee visits South Carolina on Sept. 26 as the SEC kicks off its 10-game, league-only season.

Pruitt said the Vols might not practice Saturday night either if they don’t track down the source of the latest positive test results.

“We want to make sure we figure out why,” Pruitt said of these increased positive results.

Pruitt said students are back on campus and this is something their players are going to have to learn to handle. Tennessee wants to trace these positive results back to the source of infection to prevent this from happening again.

With the season kickoff still a month away, Pruitt said they have time to be cautious and still get the 25 practices allotted in.

“It’s not like we are running out of time or anything like that,” Pruitt said. "We want to make sure that we are protecting or players and reassuring their safety.”