Ravens hope to put COVID outbreak, losing streak behind them 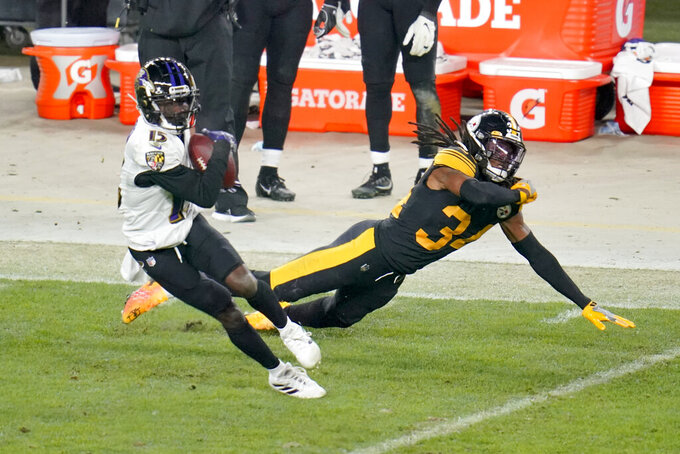 Baltimore Ravens wide receiver Marquise Brown (15) makes a catch in front of Pittsburgh Steelers strong safety Terrell Edmunds (34) and gets away to score a touchdown in the second half during an NFL football game, Wednesday, Dec. 2, 2020, in Pittsburgh. The Steelers won 19-14. (AP Photo/Gene J. Puskar)

By the time this season is done, the Baltimore Ravens would like to be known as the team that rebounded from an outbreak of COVID-19 to reach the playoffs, rather than the NFL club most impacted by playing in the middle of a pandemic.

Decimated by the coronavirus and injuries, the Ravens (6-5) lost their third straight game Wednesday in Pittsburgh. Baltimore didn't have quarterback Lamar Jackson, running backs Mark Ingram and J.K. Dobbins and started a third-string center against the unbeaten Steelers, yet still made a game of it behind a defense that was without linemen Calais Campbell and Brandon Williams.

The grit and determination the Ravens displayed in that 19-14 loss will be needed if they are to rally over the final five weeks to make the postseason for a third year in a row.

“I think we're very resilient, very persistent, a mentally tough team, and only getting tougher because of things that we're facing," coach John Harbaugh said Thursday. “It remains to be seen if we'll get the job done. It's not what you talk about, it's what you do."

The Ravens will be getting a few players back each day as they prepare for Tuesday night's game against the Dallas Cowboys. Hopeful that the COVID-19 that infiltrated the team has been controlled, Harbaugh scheduled a full practice for Friday. The team could use the work after being limited to a pair of walk-throughs heading into the game against the Steelers.

“We just need to practice more than anything," Harbaugh said. “We haven't practiced hardly at all. We need to have some good practices and get our football sea legs under us so we can go out there and perform the way we want to."

Although the Ravens have been eliminated from defending their AFC North title and are outside of the current playoff picture, the remainder of the schedule is not imposing. The only team left with a winning record is the Browns, a team Baltimore squashed 38-6 in the season opener.

“We have five games left. We have to play our best football in this stretch, and I feel like we can do it," receiver Marquise Brown said.

The defense played sound despite dealing with a depleted line, without linebacker Pernell McPhee and after losing cornerback Jimmy Smith to a groin injury.

Sure, the Steelers dropped a few passes and were without starting running back James Conner. But Pittsburgh managed only 334 yards — 68 on the ground — and converted only one of its four goal-to-go situations into touchdowns.

“Our defense played very well against one of the top offenses," Harbaugh said.

Two touchdowns usually isn't going to be enough to win in the NFL, and the Ravens got one of those scores after being presented the ball at the Pittsburgh 16.

But really, Baltimore's biggest problem occurred long before the opening kickoff. The outbreak of COVID-19 purged the roster and left the Ravens terribly short-handed in their fourth loss in five games following a 1-5 start.

Veteran defensive lineman Derek Wolfe played extremely well up front without support from Campbell or Williams (both of whom have a shot at returning next week).

“Derek Wolfe played another outstanding game," Harbaugh said. “He's been pretty dominant in there throughout the year, but especially the last few games when he's had to be."

Gus Edwards gained only 10 yards on nine carries, providing little relief after Ingram and Dobbins did not receive medical clearance despite coming off the reserve/COVID-19 list the day before the game. Edwards did, however, score on a 1-yard run.

Robert Griffin III was Baltimore's leading rusher, which wasn't all that surprising given that Jackson usually leads the way for the running attack when he's taking the snaps.

Griffin strained a hamstring during the game and may not be available against the Cowboys to back up Jackson.

10 — Baltimore made only 10 first downs, one via the pass. In the first meeting between the teams in November, the Ravens made 25 first downs.

The Ravens have no more margin for error, beginning Tuesday night at home against the last-place Cowboys (3-8). Dallas has lost four of five — just like Baltimore — but still has incentive to win as it stands only one game out of first place in the awful NFC East.