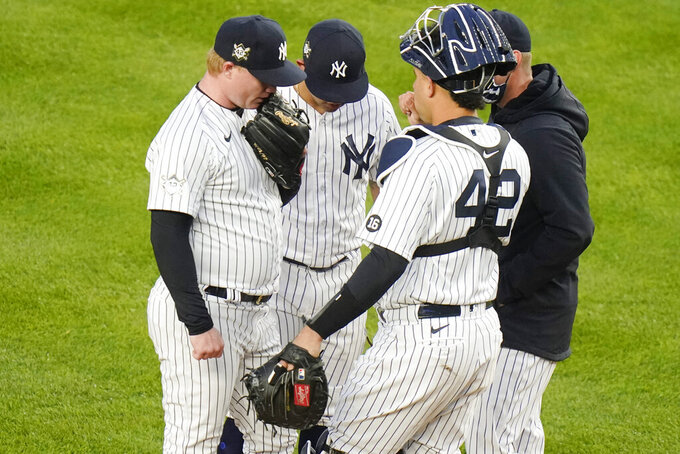 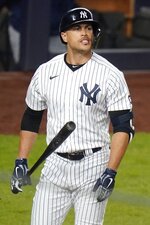 NEW YORK (AP) — Clint Frazier was batting in the eighth inning when some Yankees fans erupted, throwing about a half dozen balls on the field and causing the game to be stopped for 2 minutes, 15 seconds.

By the end of Friday night, New York manager Aaron Boone let loose during a rare postgame meeting with his underperforming players after an 8-2 defeat to the Tampa Bay Rays dropped the Yankees to an AL-worst 5-8.

“We know adversity is coming for you at some point in the season. It’s knocking on our door right now, and we’ve got to answer it,” Boone said.

Frazier hinted the manager spoke to players decibels above a conversational tone.

“He’s so chill that when he does address us the way that he does, everyone should listen because he’s not the kind of guy that really gets that upset,” Frazier said. “So I think your ears perk up a little bit more whenever a guy that’s so chill expects so much out of you and we aren’t giving it the way that we can.”

"He was obviously very upset, and rightfully so,” added Giancarlo Stanton, who hit a two-run homer in the seventh off Trevor Richards.

While the weather was crisp on a breezy 45-degree night, the Yankees were not, and the pandemic-limited crowd of 10,202 booed often.

“Just like us, they got to keep their composure, too,” Yankees pitcher Michael King said.

Brandon Lowe hit a two-run double off the right-centerfield wall in the first against opener Nick Nelson, and AL champion Tampa Bay (6-8) coasted to a win after arriving in New York with eight defeats in 11 games — and not even a lead in 25 innings. The young, athletic Rays took an eight-run lead by the seventh and beat the Yankees for the 16th time in their last 21 meetings, including during last year’s Division Series.

Rays players were taken aback by the fan misbehavior.

“Definitely haven't seen anything like that before,” Lowe said. “It's a first for my baseball experience.”

Michael Wacha (1-1) lowered his ERA from 7.00 to 4.20, allowing one hit in six scoreless innings with nine strikeouts and two walks.

“Everything was just dancing,” Wacha said.

Mike Zunino added a two-run double, one four soft hits in the sixth off Lucas Luetge, who fired his glove at the bench when he reached the dugout.

“To come in here against a good team, with their fans — you know, animated — I thought we handled things really, really well,” Rays manager Kevin Cash said.

Frazier went 0 for 3 with three strikeouts and has no RBIs in 63 plate appearances this year. Aaron Hicks was 0 for 3, dropping to 2 for 26 (.077) left-handed this season. And AL batting champion DJ LeMahieu was 0 for 4, ending his 23-game regular-season hitting streak against the Rays.

Third baseman Gio Urshela let Willy Adames’ grounder bounce off his glove for a run-scoring error in the four-run fifth, and second baseman Rougned Odor threw past first base for his second error on what should have been an inning-ending double play grounder by Randy Arozarena, allowing two more runs.

Nelson (0-2) was told Thursday night he would make the surprise start and was “juiced up, for sure.” The previous time Boone used an opener was Deivi García started Game 2 last year against the Rays and was followed by J.A. Happ in a 7-5 loss.

“I had to think back to when I was a starter and try to get that routine back in before the game,” Nelson said. "It was a little difficult thinking about all that."

“There’s plenty of time to turn it around, and it’s no time for panic buttons or none of that.” Stanton said. “We can’t be rolling out there taking hits like that."

King hit Lowe on a forearm with 90.6 mph cutter leading off the third, the sixth batter, including five Rays, hit in four games between the teams this year.

King stranded six runners in three scoreless innings that gave him nine shutout innings this season. He was optioned back to the alternate training site.

New York has had three or more errors five times in its last 28 regular-season games dating to last season.

Rays: OF Kevin Kiermaier, out since April 5 with a strained left quadriceps, will be evaluated after he works out pregame Saturday, Rays manager Kevin Cash said.

LHP Jordan Montgomery (1-0) starts Saturday for the Yankees against RHP Tyler Glasnow (1-0), who struck out a career-high 14 at Texas on Monday, allowing two hits in 7 2/3 scoreless innings. Glasnow recalled his pre-pandemic time in the Big Apple. “Usually, every time I’d come to New York before COVID, I would always go to Washington Square and play chess,” he said Friday. “I would just go to the park and get beat by all the chess players. But it’s still fun. The ones that look the worst are always the best.”