Rebel leaders who inked deal with government return to Sudan 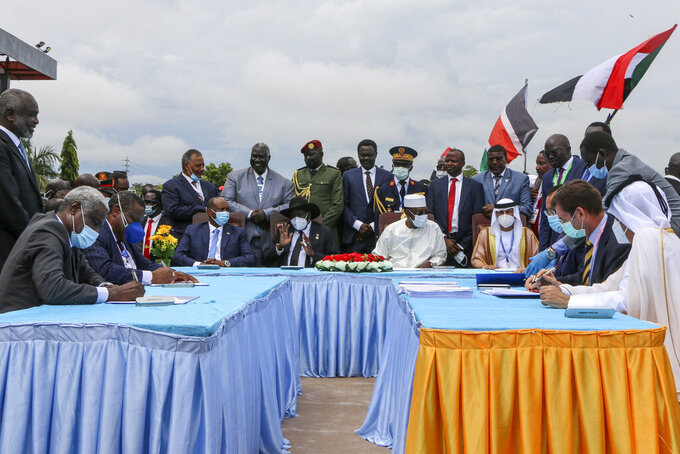 CAIRO (AP) — Sudan’s rebel leaders returned to the capital, Khartoum on Sunday, signaling the first major steps toward implementing a peace agreement with the government that aims to end the country’s decades-long civil war.

Gen. Abdel-Fattah Burhan, head of Sudan's ruling sovereign council, welcomed leaders of the Sudan Revolutionary Front as “partners and peacemakers" upon their arrival from South Sudan.

The front — a coalition of several armed groups centered in the western Darfur region, South Kordofan and Blue Nile — inked a peace agreement with the transitional government on Oct. 3 after months of arduous negotiations in South Sudan’s capital, Juba.

Al-Hadi Idriss, head of the rebel front, told a televised news conference in Khartoum that their return to Sudan “means that we have become part of the transitional government.”

Rebel leaders are to hold seats in the sovereign council currently running the country and Cabinet, according to the peace deal. Additionally, the front's armed factions are to be integrated into Sudan’s armed forces. The deal also grants self-rule for the southern provinces of Blue Nile, South Kordofan and West Kordofan.

Idriss said they would share responsibilities with the transitional government in efforts to ease the suffering of millions in Sudan amid widespread shortages of essential goods, including fuel, bread and medicine.

The transitional government has been struggling to revive Sudan’s battered economy, which has suffered under the weight of decades of U.S. sanctions and mismanagement under former ruler Omar al-Bashir, who came to power in an Islamist-backed military coup in 1989 and ruled the country until his ouster in 2019.

President Donald Trump announced last month that Washington would remove Sudan from the U.S. list of state sponsors of terrorism, opening a path for the African country to attract foreign investment and engage with the international community. Trump’s move coincided with a U.S.-backed push for Sudan to start normalizing ties with Israel, despite concerns the move was made by a transitional leadership and without public support.

Achieving peace with Sudan’s rebel groups has been a crucial goal for the transitional government, which assumed power after a popular uprising led to the military overthrow of al-Bashir from power. Sudanese civilian leaders hope the deal helps in reviving the economy by slashing military spending, which takes up much of the national budget.

Prime Minister Abddalla Hamdok also welcomed the arrival of rebel leaders to Khartoum, describing it as the “true launching” of the peace process.

“Today, we launch the first steps to end the suffering of displaced people and address their issues,” Hamdok said after receiving the rebel leaders at his office.

Hundreds of people gathered in Khartoum’s “Freedom Square” waving Sudanese flags and welcoming the returning rebel leaders amid tight security. The gathering took place despite warnings by health authorities about the spread of the coronavirus.

In attendance were military members of Sudan's 11-member sovereign council, including Gen. Mohammed Hamdan Dagalo, the commander of the paramilitary Rapid Support Forces. Dagalo and his forces, which grew out of the notorious Janjaweed militias, have fought fierce battles against the rebels in the past.

Sudan’s largest single rebel group, the Sudan Liberation Movement-North led by Abdel-Aziz al-Hilu, was involved in the Juba talks but has yet to reach a deal with the government.

Another major rebel group, the Sudan Liberation Movement-Army led by Abdel-Wahid Nour, rejects the transitional government and has not taken part in the talks.

In an address to the gathering, Dagalo called on al-Hilu and Nour to join other rebel groups in reaching a peace deal with the government.

“We need a new approach to build the county; come unify our effort and start over,” he said.