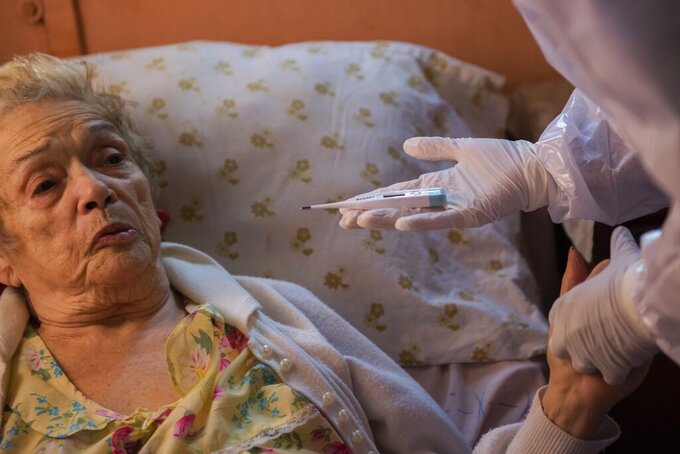 MONTEVIDEO, Uruguay (AP) — When Eduardo Rey celebrated his 69th birthday at home with 10 family members in Uruguay's capital, he didn't suspect it would start a mortal race to find medical care amid a surging pandemic

Two days after the party, the farmer came down with a fever, was coughing and felt weak. At first he and his family thought nothing of it, but then a relative who had been at the party tested positive for the coronavirus.

When Rey tested positive his family tried repeatedly to get help from a doctor on the public health care telephone, but they couldn't get one to visit his home. His family eventually took him to a hospital themselves but they were told his lungs were badly damaged.

On April 21, a month after his birthday, Rey died of respiratory insufficiency in an ICU in Montevideo, joining more than 3,000 people who have died of COVID-19 in Uruguay since March. While the number may seem small for other countries, it is huge in this South American country of just 3.5 million inhabitants and gives it one of the highest per capita coronavirus death rates in the world, according the Our World in Data.

It is a sharp turnaround for Uruguay, which for most of 2020 seemed to have the virus under control. Like many other countries, it declared a health emergency in March 2020 and the government quickly took precautionary measures, including closing its borders, limiting public transportation and closing shopping malls and offices. Authorities rushed to control outbreaks, isolating infected people and having medical personnel track their previous contacts.

But by mid-2020, authorities started reopening and for months there were no major changes. Then in November infections began to surge with the country being hard hit by the highly contagious P.1 variant, first identified in neighboring Brazil. The saturation of the country's health care system began.

So far, about a third of Uruguay's people have been fully vaccinated. Meanwhile, the country has reported more than 280,000 coronavirus cases and more than 4,000 deaths from COVID-19 since the pandemic began — up until this March only about 1,000 people had died.

“If you do not limit the mobility, do not do more PCR tests and do not track the contacts, the vaccine alone won’t help,” said Zaida Arteta, an infectious disease expert and general secretary of the Uruguayan Medical Union.

Arteta said for the number of cases to drop, “vaccination has to reach a high percentage of the population.”

President Luis Lacalle Pou, who has refused to tighten lockdown restrictions, has said his pandemic policy is that of “responsible liberty,” meaning every individual is responsible for avoiding the virus.

But people are not limiting their social interactions. A case in point is Rey's birthday party.

His wife, Graciela Díaz, recalls her husband's first symptoms. “We didn’t give them such an importance,” she said.

When Rey didn’t improve, his family called the public health system phone number to report cases and request a doctor's visit. When they got through, they were told that if he hadn't been diagnosed with COVID-19, they couldn't assign anybody.

By April 1st, he had tested positive for the coronavirus, and Díaz called the line again, but nobody answered. After several attempts, she decided to explain her husband's situation to different doctors, and they recommended asthma medication.

She kept calling the help line. Finally a doctor picked up and told her that he couldn't go to her home because there were 900 people before her husband and his case did not seem worrisome because he was already taking medication.

But the doctor also suggested: “If you see that he gets worse, call 911”, she recalled.

The family finally decided to take Rey on their own to a hospital and he was immediately accepted on April 3. They were told that all of one of Rey's lungs and a quarter of the other were damaged. Inside the hospital, he was infected by three bacterium, Díaz said.

His condition never improved. He was taken to the ICU, where he died.

Uruguay has doubled the ICU beds to 1,022 during the pandemic. Last week, 785 out of them were occupied.

Some of the sick in Uruguay were never able to get health care while others saw their condition deteriorate so quickly they never made it to a hospital.

Martín Duré became sick on March 17, and five days later he began having serious problems breathing. His sister, Graciela, said they called the official coronavirus assistance line 17 times, but nobody was sent. Duré died that same night in his bed. A doctor came hours later only to confirm his death.

Uruguay's Health Services Administration, in charge of the help line, said eight people were assigned to the telephone switchboard, but last week they hired 50 medical students to help answer the increasing calls.

“The slow or deficient response by the system literally puts lives at risk because the disease evolves rapidly,” said Dr. Jaqueline Ponzo, an Uruguayan epidemiologist.

Some experts attribute the rising number of cases and the speed of the infections to the increasing social mobility and the P.1 variant.

“We don’t know how it will evolve the P.1 variant,” said Arteta, the infectious disease expert. “It’s an uncertain scenario.”