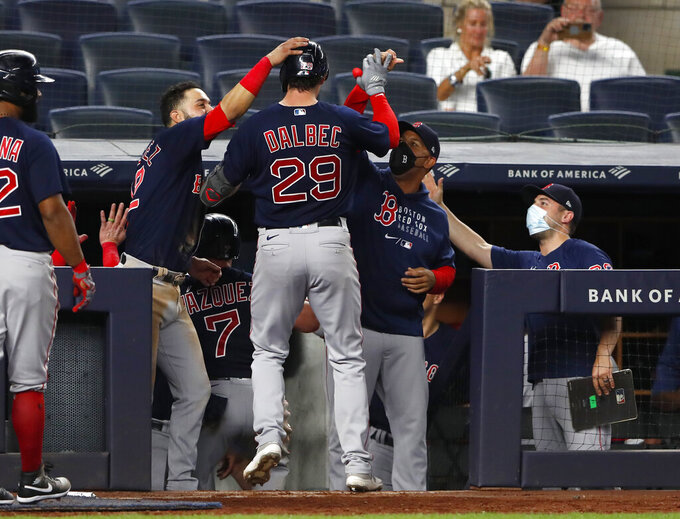 Boston Red Sox's Bobby Dalbec (29) celebrates at the dugout with teammates after hitting a home run against the New York Yankees during the eighth inning of a baseball game Saturday, June 5, 2021, in New York. (AP Photo/Noah K. Murray)

NEW YORK (AP) — Punchless during the pandemic-shortened 2020 season, the Boston Red Sox have come back ready to fight.

“That's what we preach,” Kiké Hernández said. “Battling from the first pitch until the last.”

Hernández snapped an 0-for-27 skid with a tiebreaking double in the eighth inning and the Red Sox completed their major league-best 20th come-from-behind victory, beating the New York Yankees 7-3 Saturday night.

Hernández got his first RBI since May 20 by roping a two-out, two-strike fastball from Chad Green (0-4) to the wall in left, scoring Rafael Devers from first.

“Nobody wants to go on a skid like I did,” Hernández said. “I don't know how many at-bats it was, but it felt like it was a lot more. Felt really good to finally get on the board.”

Christian Vázquez scored Hernández a batter later with a grounder that skipped over the first-base bag, and Bobby Dalbec followed with a two-run homer estimated at 453 feet.

Boston had 10 comeback wins while finishing last in the AL East during last year's coronavirus-shortened 60-game season. They've doubled that total through 58 games this year, helping them tie for the second-best record in the American League.

The Yankees dropped behind Toronto into fourth in the AL East. They are 3-9 in their past 12 games, averaging just 2.4 runs, and fell to 14-21 against division foes.

“That’s not good," manager Aaron Boone said. "If we’re gonna be the club we expect to be, we need to improve that and turn that around.”

Former Yankees minor leaguer Garrett Whitlock (1-1) faced New York for the first time after Boston selected him in last year's winter meeting draft. He allowed an inherited runner to score in the sixth but wasn't charged with a run over 1 2/3 innings. He was credited with his first major league win.

“I was definitely hoping to get in there today," the right-hander said.

Another former Yankee, Adam Ottavino, pitched a perfect eighth in his return to the Bronx. Left fielder Alex Verdugo made a diving catch in the ninth before Brandon Workman walked two with two outs, prompting manager Alex Cora to call on closer Matt Barnes.

Barnes struck out Kyle Higashioka for his 14th save.

Boston rallied without slugger J.D. Martinez, who was scratched from the lineup a night after jamming his left wrist into a base while sliding. Cora said Martinez is day to day.

After going 9-1 against Boston in 2020, New York has dropped the first two of 19 against the second-place Red Sox this year, this one in front of 20,019, the largest crowd at Yankee Stadium since the pandemic.

“We’re taking our lumps right now," Boone said. "We’ve got an opportunity to turn it around and at least salvage the series tomorrow.”

Gleyber Torres hit a two-run homer for New York for an early 2-0 lead, and he added a tying sacrifice fly in the sixth. He also made a heads-up defensive play in the second, cutting off a throw from the outfield and redirecting it to second for a rally-killing out.

Taillon was charged with three runs in 5 1/3 innings. He allowed six hits and a walk, struck out three and threw 76 pitches.

Torres' homer off Eduardo Rodriguez was a no-doubter to left, and he watched it the whole way before throwing his bat and starting his trot. It was the 24-year-old's third homer of the season and first since May 21. The two-time All-Star hit 38 homers in 2019 but has just six since.

Rodriguez allowed three runs in 5 1/3 innings, striking out seven on 88 pitches. He avoided losing a fifth straight start. Boston had given him a total of one run of support over those games.

The Red Sox have allowed one or zero home runs in 21 of their past 22 games.

“We are where we are in the standings because of our pitching,” Hernández said.

WHILE THE GITTENS IS GOOD

The Yankees promoted slugging prospect Chris Gittens from Triple-A Scranton/Wilkes-Barre, hoping the hulking 27-year-old can provide a jolt at first base in his first turn in the majors. He was 0 for 3 with a walk.

Red Sox: RHP Ryan Brasier has left a hospital and returned home after taking a line drive to the head during a simulated game in Fort Myers on Friday. Brasier has a concussion and a cut over his right ear, but Cora said the club is relieved the diagnosis wasn't worse. Brasier is on the injured list with a strained left calf.

Yankees: RHP Luis Severino will make a rehab start Sunday for Low-A Tampa, his first appearance since having Tommy John surgery on Feb. 27, 2020. ... LHP Zack Britton (surgery March 15 to remove bone chip from left elbow) pitched a scoreless inning in his third rehab appearance with Double-A Somerset. His next outing will be Tuesday for Scranton/Wilkes-Barre. ... RHP Corey Kluber (shoulder) was transferred to the 60-day injured list.