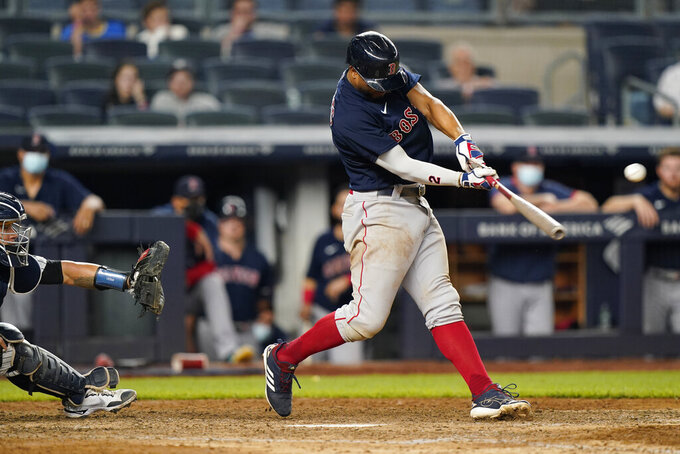 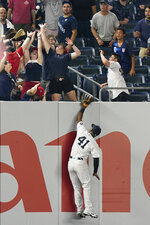 NEW YORK (AP) — Eager to reverse a recent trend, Marwin González, Xander Bogaerts and the Boston Red Sox are off to a terrific start against their old rivals this season.

Bogaerts hit a two-run single with two outs in the 10th inning and the Red Sox held off the struggling New York Yankees 6-5 in a wild finish Sunday night for their first three-game sweep in the Bronx since June 2011.

González launched a tying homer in the seventh and made a slick defensive play at second base with a runner in scoring position for the final out. A fired-up González also turned a tough double play in the bottom of the 10th — and committed a throwing error that put Tyler Wade on second with two outs after his RBI infield single.

“It was a total team effort,” Red Sox manager Alex Cora said. “We just grind games and we keep playing till the end.”

Gleyber Torres lined a tying double in the bottom of the ninth off closer Matt Barnes, but Boston (36-23) recovered to win its fourth straight and move a season-high 13 games over .500.

New York went 9-1 versus the Red Sox last year and had won nine straight home series against them since August 2017 until Boston took the first three of 19 scheduled meetings this season.

It was the first sweep for the Red Sox in the longtime rivalry since taking four games at Fenway Park in August 2018 during their World Series championship season.

“It was real nice," Bogaerts said with a grin. "We know we haven't had a lot of success these last couple of years, but this team is different. We have a lot of winning players.

“I think this was a good statement that we made coming in here.”

Gary Sánchez had a two-run double off Garrett Richards in the first inning, but the fourth-place Yankees have dropped four in a row and 10 of 13.

“No concern at all. We’re a really good team,” Sánchez said through a translator. “There’s no doubt that we’re going to be able to get out of it.”

Alex Verdugo homered on the fifth pitch from New York starter Domingo Germán, the only run he gave up in 5 2/3 innings.

González connected for a two-run shot off reliever Lucas Luetge following a leadoff walk on four pitches to Hunter Renfroe.

“It's no secret I've been grinding offensively lately,” said González, who began the night batting .201 with one home run. “It was special to hit that homer and tie the game.”

“We got lucky there,” Cora said.

Bogaerts singled to left-center in the 10th off Luis Cessa (1-1) after Arroyo advanced two runners with a sacrifice bunt.

Phillips Valdéz started the critical double play in the bottom of the 10th and got three outs for his first major league save.

Boston is 15-3 in its last 18 games against AL East opponents and leads the majors with 21 comeback wins.

Barnes (2-1) was handed his second blown save in 16 chances this year. The right-hander was trying for his third save of the series.

Yankees coaches Phil Nevin and Carlos Mendoza were ejected separately in the 10th for arguing balls and strikes. Nevin just returned to the dugout Friday for the first time since May 9 because of a difficult bout with the coronavirus and a couple of serious infections. Mendoza, the team’s bench coach, has been filling in at third base for Nevin. First base coach Reggie Willits moved to third in the bottom of the 10th, and quality control coach Tanner Swanson took over at first.

NOT QUITE THE SAME

Cora on the current state of the Red Sox-Yankees rivalry: “I think there were more characters when I played. It was fun,” he said, adding there were a lot more fights in the stands, too. “Nothing against this beautiful facility, but the feeling in the other one was a lot different.”

Red Sox: J.D. Martinez sat out again after getting scratched from the lineup Saturday night. The slugger jammed his left wrist sliding into a base Friday night. Cora said Martinez was a little sore, but X-rays were negative and the team thinks another day or two off will benefit him. Cora said the Red Sox feel Martinez is progressing and, as of now, won’t land on the injured list. “It’s just us thinking ahead and not pushing it so hard,” the manager explained. Martinez is 1 for 11 with six strikeouts against Germán.

Yankees: RHP Luis Severino reached 99 mph with his fastball and threw 24 of 34 pitches for strikes in a rehab start for Low-A Tampa, his first appearance since having Tommy John surgery on Feb. 27, 2020. He allowed one run and two hits with three strikeouts in 2 2/3 innings. “Very encouraged,” manager Aaron Boone said. “Sounds like today was another positive step.” Severino’s next outing is scheduled for Saturday with a higher-level farm team in the Northeast. ... Slumping DH Giancarlo Stanton was rested, and Boone acknowledged he thinks the slugger is dealing with “some residual stuff” physically. Stanton returned from a left quadriceps strain on May 28. He struck out as a pinch-hitter with a runner on to end the eighth.