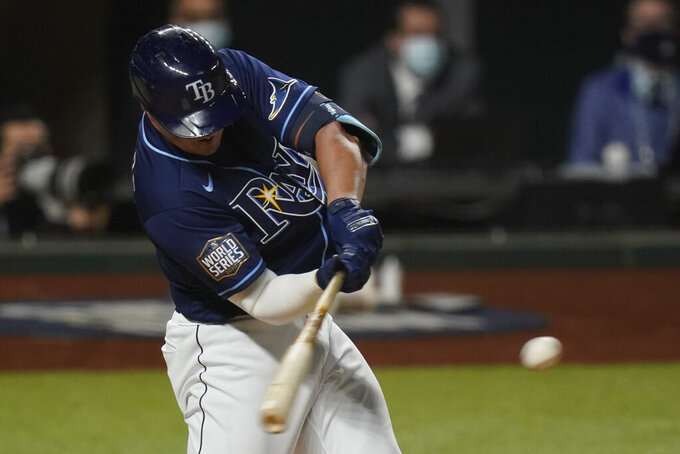 BOSTON (AP) — The Boston Red Sox saw enough of Hunter Renfroe at Fenway Park this summer to think he might be a good fit.

In two games in Boston for the Tampa Bay Rays, the right-handed slugger was 4 for 11 with two homers and two doubles. One of the homers went out to right field, but the other one went over the Green Monster and Lansdowne Street beyond the left field wall.

“I really look forward to playing, hopefully, 80-plus games there,” Renfroe said on Monday after signing a one-year deal that would pay him $3.1 million. “I make no bones about it, I pull the ball. I think that’s going to really serve me well.”

Originally drafted by the Red Sox in 2010 but opting instead to go to Mississippi State, Renfroe was then selected by the Padres in the first round in 2013. He hit 26 or more homers in three straight seasons for the Padres before struggling with the Rays in the pandemic-shortened season — batting .156 with eight homers and 22 RBIs in 42 games.

Except when he came to Boston.

“Hunter has shown in the past what he’s capable of. We think playing in our park is just going to enhance that,” Chief Baseball Officer Chaim Bloom said. “He should be able to mis-hit balls over the Green Monster. We saw it this summer. He came in here and peppered the Mass Pike and also hit balls into the bullpen."

Renfroe also had 13 outfield assists in 2019, tied with Bryce Harper for the most in the NL, and 23 defensive runs saved to tie Cody Bellinger for second among major league outfielders.

“He’s a really well-rounded player,” Bloom said. “The power has been obvious, and that’s been his calling card throughout his career.”

In all, Renfroe has hit .228 with 97 home runs and 226 RBIs over five seasons with San Diego and Tampa Bay. He also hit two homers last postseason — one in the World Series and the other the first grand slam in Rays postseason history.

Personally struggling while the Rays made it to Game 6 of the World Series was OK with Renfroe.

Also Monday, Bloom said the team had received no formal guidance on when the 2021 season would begin, what rules might be changed or whether the state will allow fans in the stands.