Red Sox's Sale not looking too far ahead after elbow surgery 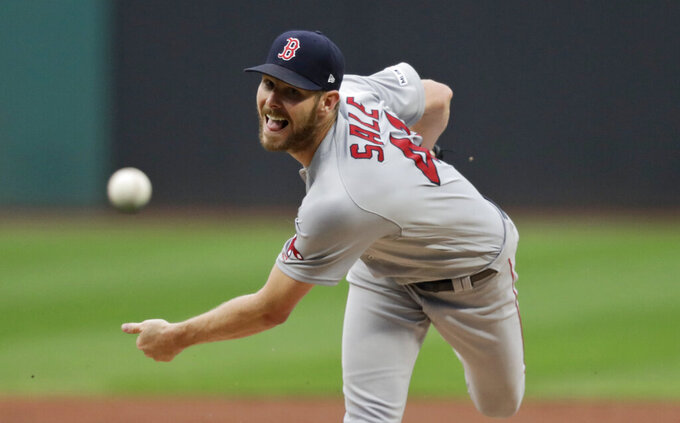 FILE - Boston Red Sox starting pitcher Chris Sale delivers in the first inning of the team's baseball game against the Cleveland Indians in Cleveland, in this Tuesday, Aug. 13, 2019, file photo. Chris Sale is getting closer to getting back on the mound following Tommy John surgery in March. The 31-year-old was the only player at the team's facility in Florida for months as he began his rehab this offseason. He's had a few hiccups, including a brief bout with COVID-19 and a neck injury. But as the team joined him to open spring training on Thursday, Feb. 18, 2021, he says he's methodically working his way through his throwing program he isn't thinking beyond the next day as he looks to make a midseason return. (AP Photo/Tony Dejak, FIle)

Chris Sale has tried not to think about the future as he began working his way back from Tommy John surgery in April.

As virtually the only person at the Red Sox’s training facility in Florida this offseason, it helped keep the 31-year-old left-hander sane as he began the first steps of a recovery program expected to take a minimum of 14 months.

He has had a few hurdles that have slowed the process, including neck injury and a mild bout with COVID-19 last month that required him to quarantine for two weeks. But as Boston’s pitchers and catchers arrived in Fort Myers to join him for their first spring training workout on Thursday, Sale said he’s a full-go and is concentrating on checking off each benchmark of his throwing program as he inches closer to a return.

“I was here by myself the whole summer, it’s nice to get back and have people around and be like a ballplayer again,” Sale said Thursday. “I’ve never been more excited for spring training. ... Just, you know, feeling normal again.”

That journey has been a slow one for the seven-time All-Star who is 109-73 in 10 major league seasons and is entering the third season of a $160 million, six-year contract.

But after helping the Red Sox win the 2018 World Series, he went just 6-11 in 2019 with a 4.40 ERA in 25 starts last year, marking his fewest wins and starts, highest ERA, and the first time he failed to finish among the top six in Cy Young Award voting in any full season as a starter.

He then missed the start of spring training in 2020 with an illness that the team described as a flu that it said turned into pneumonia. The Red Sox later revealed he had a flexor strain near his pitching elbow, and after consultation with doctors Sale decided ligament replacement surgery was the best option.

He eventually underwent the procedure on March 30.

While Sale said he believes there’s no doubt he will be a better pitcher after having the surgery, he isn’t allowing himself to ponder what it will look like yet.

He’s yet to throw off the mound, but is content to be doing the conditioning and limited baseball activities that he’s allowed to at this point.

“I’m not looking at, a month from now, two months from now, even really even a season,” he said. “I can’t. That wouldn’t be fair to myself for my teammates or anybody involved in this process. So, the mound comes when it comes and I just take it a day at a time and I’m doing everything I can to get back out there.”

When Sale does return, he’ll join a pitching staff that looks vastly different. But he says he’s confident the group will be able to find its way with Alex Cora back for his second stint as manager after serving a one-year suspension for his role in the Astros sign-stealing scandal

Cora said Thursday that there is currently isn't a timeline for Sale's return.

“I do believe that with his teammates around, the whole group around, the coaches, it’s going to help him. It’s not easy going through a rehab,” Cora said. “I have the utmost respect for Chris. ... I’m looking forward to penciling his name into the lineup one of these days."

Sale said he stayed in contact with Cora throughout last season and expects that even a younger team than the one Cora led in 2018 will benefit from his presence in the clubhouse.

“Camaraderie, trust, passion,” Sale said of the attributes that Cora brings. “You can’t you can’t talk to him about anything and not know that he’s all in."

Though he won’t be able to contribute until at least May or June, Sale said in the meantime he's excited to provide whatever leadership he can in the interim.

That includes mentoring pitchers like 24-year-old right-hander Tanner Houch, who went 3-0 in three starts last season and has a delivery which has been compared to Sale’s.

“I’m obviously not playing baseball and I’m making a lot of money to do it. I better bring something to the table," Sale said.

NOTES: Cora said C Kevin Plawecki was the only player to test positive for COVID-19 thus far. Plawecki was placed on COVID-related injured list on Wednesday. ... LHP Eduardo Rodríguez, who missed all of last season with COVID-19 after developing a heart-related complication because of it, threw a bullpen session Wednesday also has no restrictions. “He’s in great shape, worked hard during the winter,” Cora said of Rodríguez. Very excited to have a full season and see what he can do.”